A forgotten ace in Philadelphia

Share All sharing options for: A forgotten ace in Philadelphia

Like so many love stories baseball articles before this one, it all started with a girl graph. I set out to see if by graphing a few things that I could validate a particular hypothesis. My goal was simple: to graph a few standard components of FIP and SIERA, specifically K/BB ratio and GB/FB ratio for every starting pitcher who has pitched at least 200 innings over the last three seasons. The horizontal axis of the graph (X) shows the strikeout to walk info while the vertical axis (Y) shows the ground ball and fly ball data. I set the intercepts at the mean for each ratio to create four quadrants. Take a look for yourself: 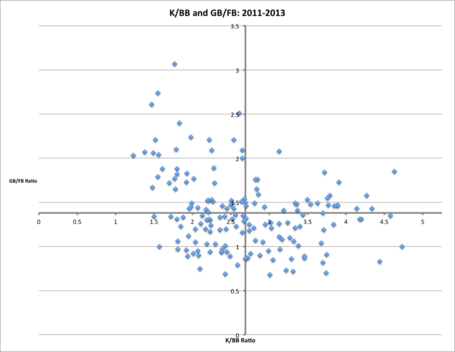 Clearly, the graph shows some pretty big clusters, mostly around the averages (no surprise). There aren't many pitchers that both keep the ball on the ground and generate a bunch of strikeouts outside of Adam Wainwright and Felix Hernandez. Instead, there are a ton of guys who specialize in one way or another. Sure, there's ground baller Charlie Morton and fly ball guys like Bruce Chen and Phil Hughes, but I was underwhelmed at the distribution of pitchers on this chart. I expected the distribution to be more widespread and for the elite pitchers to stand out in a more pronounced way. I was wrong.

Except for one guy. Take a look at the chart now that I've extended the horizontal axis: 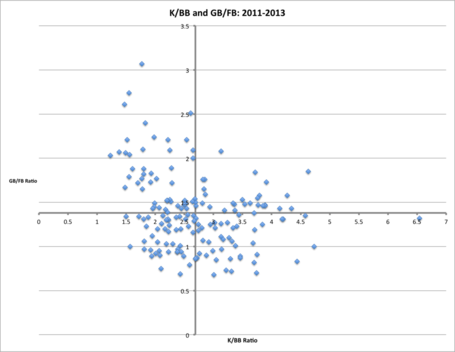 That new dot on the far right? That's Cliff Lee, he's out there all alone, keeping his K/BB ratio incredibly high and maintaining a strong GB/FB ratio. From this graph, we can see that Lee has done an impeccable job of controlling what he can while logging a ton of innings. Take a look at his ranks on a number of collective metrics from 2011-2013:

There's been a lot of talk in Philadelphia this winter about Roy Halladay's retirement and how the Phillies will proceed without Doc. His greatness has been recounted on numerous occasions and rightfully so. Much of the other (non-Fire Amaro!) Phillies talk has centered on potential trades for Cole Hamels (and to a lesser extent, Lee himself). Clayton Kershaw (deservedly) stole the spotlight when his extension with the Dodgers was signed, but it seems as if no one takes the time to celebrate the current domination of one of the league's quietest aces. Lee's not the electric arm that Stephen Strasburg is and he doesn't posses the unbelievable arsenal of Yu Darvish. In fact, Doug Thornburg of Baseball Prospectus pointed out that Lee succeeds in spite of his "flawed mechanics." With all of this said, Cliff Lee continues to churn out league-leading results pitch after pitch, start after start, year after year.

I was curious see who Lee's comparables were. Any time there is an attempt to compare one guy to another I get squeamish, but I came to an interesting finding: Lee compares favorably to Roy Oswalt. Of course, Oswalt just officially retired from baseball after a great career. A quick glance at his FanGraphs player page tells us that he was really good but probably not a Hall of Famer. So, does that mean that Cliff Lee won't be a Hall of Famer? To find out, let's do a quick comparison of Oswalt and Lee over their careers:

Oswalt was pretty darn consistent until he eventually broke down for good during his age 33 season. He had two seasons of 6 fWAR or more and two 200+ strikeout seasons. He kept his walks low all along, maintaining a strong K/BB ratio. Lee, on the other hand, had a decent major league introduction before hitting a major bump in the road that landed him back in the minors at age 28. Of course, he came back with a vengeance and hasn't really slowed down since, remaining one of the best pitchers in the game since 2008.

But is Cliff Lee a Hall of Famer? Not yet, that's for sure. He still trails Oswalt by 3 fWAR, although he'll likely achieve that next season, perhaps even before the All Star Break. His resume will be more impactful that Oswalt's, however, as he has four seasons of 6.5 fWAR or more and eight seasons of 200+ innings. Post-2008, Lee's been consistently effective with his highest FIP as 3.13. The highest. If that's not impressive, I don't know what it.

I suppose the whole issue will come down to Lee staying healthy and putting together another 15 fWAR or so. Given his recent performance, that doesn't seem particularly far-fetched. He's avoided major injury thus far, but as Oswalt demonstrated, there's a timeline for everyone, and the timelines for pitchers are the most difficult to project.

Hall of Fame or not, Cliff Lee is an underappreciated performer. It's easy to get sucked into a Justin Verlander start or be captivated by Jose Fernandez, but make sure you take the time to witness one of the finest pitchers of his era, Cliff Lee. There may not be a ton worth watching in Philadelphia this season, but there are 30 or so games you definitely don't want to miss.

Jeff Wiser is a contributor to Beyond the Box Score and co-author of Inside the 'Zona, an analytical look at the Arizona Diamondbacks. He occasionally blogs about craft beer at BeerGraphs and you can follow him on Twitter @OutfieldGrass24.