Despite once being a top prospect, Desmond Jennings hasn't quite become the player his tools suggest he can be. What's holding him back?

Not long ago, Desmond Jennings loomed over the future of the Rays franchise like many an organization’s top prospects often do. From 2009-2011, Baseball America ranked Jennings within the top five of Tampa Bay’s minor league system, placing him No. 1 overall among the team’s prospects back in 2010. He was supposed to be the heir apparent to Carl Crawford and B.J. Upton in the Rays outfield, a player who combined plus speed with strong contact ability and some power to boot.

More: No reason to worry about Matt Cain in 2014

Despite debuting in 2012 and shifting over to center field on a full-time basis in 2013, Jennings hasn’t quite been the type of difference-making performer his tools still indicate he can be. This isn’t to suggest that Jennings is an inadequate player; the 27-year-old did compile 3.2 WAR (his second straight season crossing the three-win threshold) and a 112 wRC+ last year. Yet given all his physical abilities, something about Jennings remains a tad underwhelming, as if he hasn’t quite found the necessary consistency to allow his obvious talent to shine through on a regular basis.

He batted .252/.334/.414 with 14 home runs last season, and despite a strong first half, much of his play was overshadowed by a dismal second half in which Jennings hit .222/.332/.339. For the second straight year, Jennings failed to even record 150 hits, which is a far cry from the type of speedy, high-contact hitter many scouts envisioned he would become.

His line-drive rate, moreover, dipped to a pedestrian 17.1% in 2013, the seventh-lowest mark among everyday players. Even more of a hindrance to Jennings’ consistency at the plate was the above-average infield fly-ball rate (12.5%) that he posted last year. In fact, since 2012, Jennings has one of the highest infield fly-ball percentages in baseball, as he finished with an extreme 18.5% IFFB% two seasons ago.

The spray chart below shows the location of these infield pop-ups from 2012 through 2013:

Given his speed and high ground ball profile, one would expect Jennings to hit consistently near the .300 mark. However, Jennings’ propensity for the infield fly has been a critical reason why his career batting average remains stuck at .250. He simply hits too many pop ups to achieve a high number of hits on balls in play.

In addition, Jennings has a fair amount of swing and miss in his game. He is a patient hitter (compiling below-average swing rates in 2013), but also makes below-average contact as well. His Contact% fell to 78.4% last season, as Jennings suffered from a pretty pronounced platoon split, hitting only .231/.311/.386 with a 19.7% strikeout rate against right-handers.

According to Brooks Baseball, Jennings really struggled against sliders in 2013, posting a .119 batting average and an .060 ISO against the pitch. Righties were especially able to take advantage of the slider versus Jennings, often burying the offering down and away in a location where he struggled to make contact: 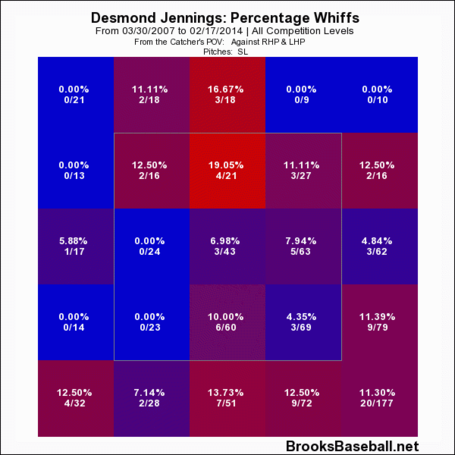 Heading into 2014, Jennings faces more question marks than he ever has throughout his professional career. He has shown a pretty extreme tendency for infield pop ups, and judging by his performance against the slider (the pitch he saw more than any other but the fastball in 2013), many opposing pitchers have figured out a way to best attack him.

What Jennings truly needs is to find some consistency. He hasn’t stolen as many bases in the majors as observers expected, but he hasn’t quite gotten on base enough either. Cutting down on those infield flies and, hopefully, hitting a few more line drives (or even ground balls) would be a step in the right direction.

In recent years, the Rays have always seemed to be a good hitter away from truly contending for a World Series, and Jennings, despite his issues, has the talent to be that hitter for Tampa Bay. Evan Longoria’s health is an ever-crucial factor, as is James Loney’s ability to build on a strong 2013 campaign. But if the Rays want to take that next step toward AL East supremacy and World Series contention, Jennings might just be the most important player on their roster.

All statistics courtesy of FanGraphs unless otherwise noted.

Alex Skillin is a writer and editor at Beyond the Box Score and also contributes to SB Nation's MLB newsdesk. He writes, mostly about baseball and basketball, at a few other places across the Internet. You can follow him on Twitter at @AlexSkillin.