Share All sharing options for: Hitting in deep counts

Last week fellow Beyond The Box Score contributor Ryan P. Morrison wrote a piece on the selectivity of the Red Sox at the plate, to which a commenter asked "As an AB progresses, does it inherently favor the hitter?" I begin with the obvious--this data from Baseball-Reference shows how hitters performed by pitch count in 2013:

It shouldn't be surprising how well hitters perform when hitting the first pitch. I suspect hitters are taking advantage of breaking balls that don't break, cutters that don't cut, splitters that don't split, or 95 mph fastballs that are closer to 91 with no movement. They're seeing mistakes and capitalizing on them. This creates a natural tension between the desire to work a count, particularly with a starting pitcher and taking the gift the pitcher has offered. I'd be very interested in what batting coaches would have to say on this matter, but I'm guessing any time pitchers throw a pitch just begging to be hit into the seats is a good time to swing. If the ultimate point is to swing at the best pitch with which to make contact, why not take it if it's the first pitch?

The hitter has the advantage when ahead in the count and the pitchers have the same when they're ahead; no real surprise. What the commenter was asking was what happens after the count reaches 3-2 and the hitter starts hitting foul balls and increasing the number of pitches seen--does any advantage return to the hitter? Put another way, we can easily track how well a hitter performs in the first five pitches, but what happens after that?

I attempted to answer that question in the comments section of the post because I do have that data but I couldn't format it properly. I sent it out to my fellow writers, and Ryan suggested I write it up. It's February and I'm running on fumes for ideas as it is, so that worked for me. Baseball-Reference play-by-play data shows performance by the number of pitches seen in an at-bat from 2009-2013:

For the record, the most pitches seen in an at-bat in this period was 17 (Pittsburgh Pirate Freddy Sanchez batting against Houston Astro Chris Sampson in 2009--that's why Sanchez's picture is at the top of the post), and it ended in an out. By the time a hitters sees five pitches, he's usually reached a full count, so everything after that is the result of him fouling off pitches.

It doesn't appear that hitters have a higher average as they move deeper into the count, which is contrary to just about every color commentator I've ever heard. This is perfectly logical--the hitter still has two strikes on him and has cut down his swing and strike zone. It's a natural tendency to remember one of the 111 home runs that occurred on the tenth pitch or later and conveniently forget the 2200+ occurrences when an out was made. To the extent it matters, the difference between a .206 average after 5 or 6 pitches and a .233 average after 10 or more pitches probably reaches statistical significance, but I'm not clear it has real-world relevance. Any discussion predicated on the difference between a .233 and .206 batting average isn't one I'm interested in having.

Having written that, the walk rate increases and the strikeout rate decreases with each subsequent pitch: 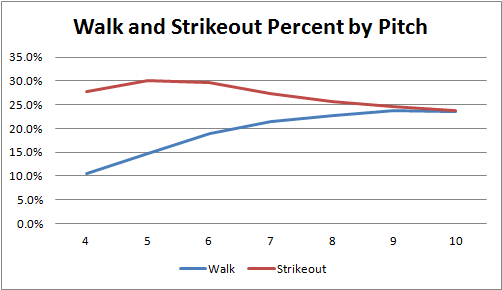 Maybe there is an advantage, suggesting some element of mental toll is taken on the pitcher. I'm not sure that's a proper conclusion to make from this data, and that's for people smarter than me to determine.

It would seem a hitter should gain an advantage with more pitches seen--he's getting a better feel for the pitcher's delivery, he's probably seen everything the pitcher has to offer, and there's a chance the pitcher might be getting frustrated. This just feels like it should be true, but it doesn't appear to be the case when looking at batting average. If we expand our view to acknowledge the job of a hitter is to get on base in any manner possible, the advantage does increase with each pitch as the likelihood of a walk goes up and the OBPs increase dramatically. So when we see those at-bats that seem to go on forever, just remember, each pitch does marginally increase the batter's advantage. As we begin to hear every hitter state this spring their desire to "work deeper into the count" or "see more pitches," this is why--it works.