Will CC Sabathia bounce back?

An ungodly 2013 left many baseball fans wondering if the CC Sabathia that we once knew was gone forever. Luckily, that may not be the case just yet.

Share All sharing options for: Will CC Sabathia bounce back?

After a lackluster 2013 season in which he posted a 2.7 fWAR, the lowest of any season in his 13 year career, CC Sabathia will begin this season with both questions and hopes. As in, "Will CC Sabathia be better in 2014 than he was in 2013?" and "I hope so."

But, Sabathia's pitching woes last year might not have been all of his fault. As Beyond the Box Score editor Alex Skillin pointed out in January, Sabathia's HR/FB rate was an extreme 13.0% in 2013, almost four percent higher than his career rate and two-and-a-half percent higher than the league average in 2013. Although Alex concluded that Sabathia should lower that rate in 2014, he remained skeptical about how much that difference would help Sabathia's prospects overall as he moves forward, considering his age and the amount of work that he has put on his body.

While I tend to agree that he may be nearing a decline—after all, he's pitched nearly 3,000 innings and will be 34 by midseason—I still believe that the CC we saw in 2013 isn't all that different from the CC of the past. For reference, here are Sabathia's numbers from 2009 to 2013:

The biggest difference, of course, is the aforementioned spike in HR/FB rate. In the last two years, he's posted significantly higher totals than any previous season (his only other double-digit percentage was in 2005, at 10.6%). Beyond that, though, much of his numbers from last year fall in line with the prior seasons. His K/9 was the same last year as it was in 2010, his BB/9 was lower than it was in 2010, his BABIP was lower than it was in 2011, and his xFIP was just about the same as it was in 2009 (although the FIP was far different, as 2009 was his lowest HR/FB rate of his career).

As far as how his numbers last year compare to his career totals, it's much of the same. Take a look:

Some difference, sure, but nothing monumental other than that wretched HR/FB rate. So, what else could be affecting his performance? Well, for one, his velocity seems to have dropped in the past couple of years. Here are the average release speeds of all of Sabathia's pitches over the last five years, courtesy of Brooks Baseball: 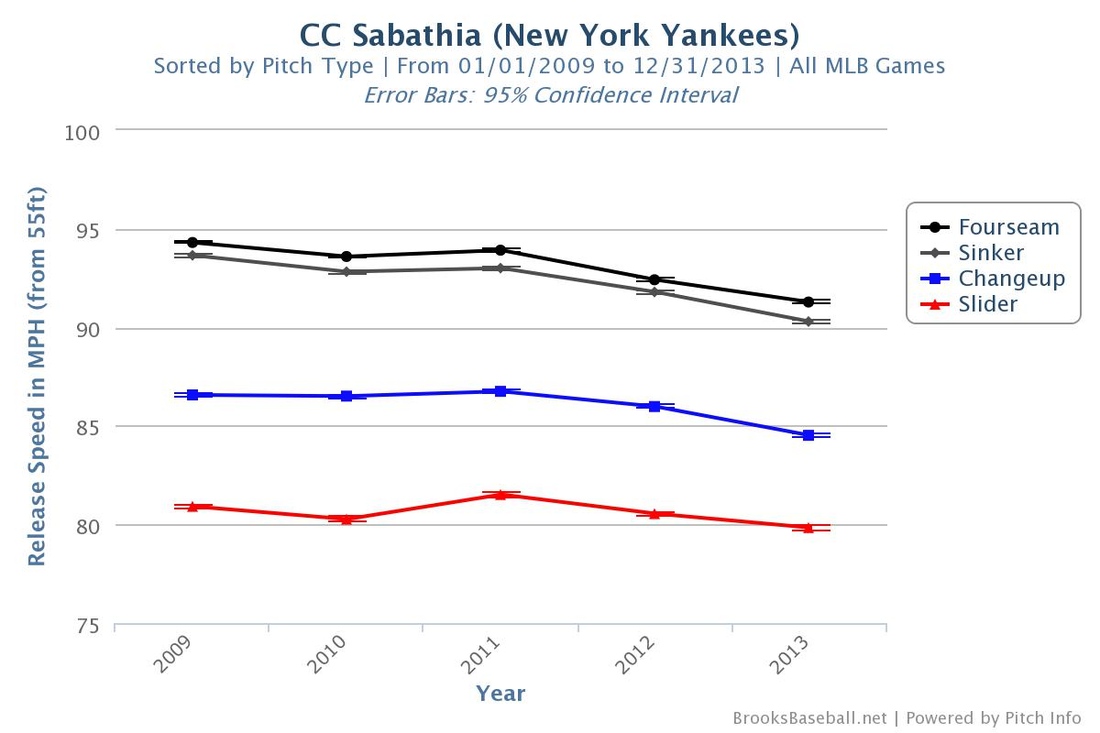 It could be age and workload, as I've already touched upon, but it's likely a change in his mechanics. More specifically, it seems that he's dropping his arm much lower than he used to. Here's that same time frame looking at his vertical release point, which influences a pitcher's velocity: 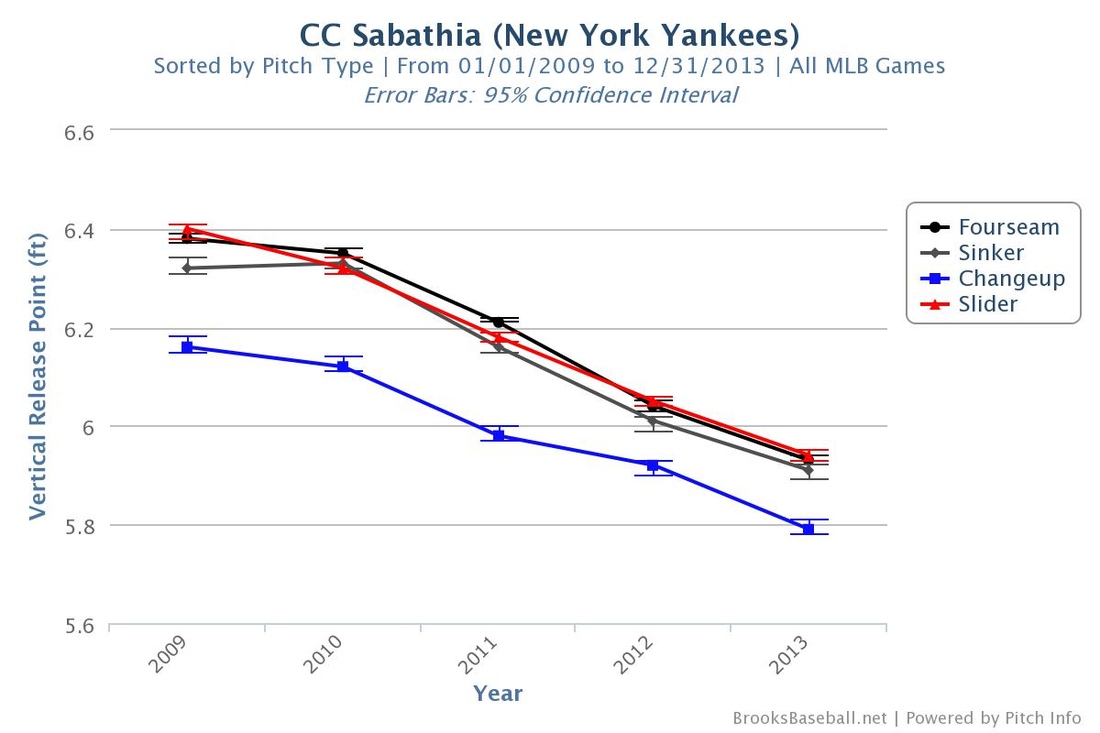 The elephant in the room, though—or lack thereof—is Sabathia's weight loss. In an interview with ESPN New York, Sabathia admitted that the massive weight loss prior to last season made him feel like he "wasn't physically ready to go out and play," and that he was feeling fatigued "by the fourth or fifth inning." So, it's entirely possible that this drastic change in his body contributed to his drop in production.

Maybe the thing we're missing, though, is something much smaller than weight loss... or an elephant. In 2013, the Yankees infield consisted primarily of Chris Stewart (844.1 innings) at catcher, Lyle Overbay (1,031 innings) at first base, Robinson Cano (1,350.1 innings) at second base, Eduardo Nunez and Jayson Nix (608.1 and 380.1 innings, respectively) at shortstop, and a mix of Nix, David Adams, and Alex Rodriguez (285.1, 253, and 233 innings, respectively) at third base. Here are those players and their defensive statistics from last season:

Of course, it's not just some ground balls that turned into base hits that will determine CC's success this season. It will be a culmination of a witch's brew of age, innings pitched in his career, a drop in velocity over the past five years, a regression to the mean for his HR/FB rate, weight loss, and a hope that his infield improves just a little bit defensively.

Can CC bounce back? Yes, of course, he's likely a future Hall of Fame pitcher. But, will he bounce back? I say "yes," but we'll have to wait until April to see just how close he can come to his former self.