It's time to see how top prospects fared when comparing 20 different top prospect lists. Who is high, and who is low?

Finally, it's consensus top prospect time -- my favorite time of the year. What's better than a top 100 prospect list? Twenty of them! Every time a player appears on a list, he is given 151 minus his ranking number of points (A ranking of No. 1 gives 150 points). All of the points are added up and the player with the highest total is ranked at the top. The reason I do this instead of taking the average ranking is very simple: It's better. Take Braden Shipley for example. He appears on eight lists with an average ranking of 54. However, his total points ranking is 69. We must take into account the fact that not all players are ranked by all lists, so an average ranking is misleading.

This year, for the first time, I have split the list into two - regular and fantasy. Each type of list focuses on different parts of a player and they should be separate. Thankfully, there are enough types of each lists to make this worthwhile. I found 11 regular lists and nine fantasy lists.

Unfortunately, not all lists have the same criteria and as a result, many did not rank Masahiro Tanaka, Jose Abreu, or Carlos Martinez. Kiley McDaniel at Scout went one further and didn't rank any prospect with a good shot at a major league job. In order to keep a good ranking system, I placed the average of each of these player's rankings from the other lists in those empty slots. This is how Tanaka placed as the number five prospect, even though he was only ranked on seven of the 20 lists. Alex Guerrero and Miguel Gonzalez were in a different category and were not even ranked by all lists where they were eligible. I did not include any extra rankings for them. 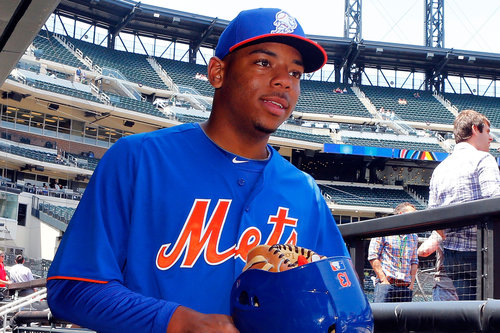 A comparison of each of the lists on the 2014 consensus prospect list.

Here is a spreadsheet with all lists together (excluding Keith Law's as his listing is for ESPN insiders only). In the list below, I put 200 (NA) for those players unranked in each type of list. This was in order to make the sorting work for each column.

John Sickels (Minor League Ball) (I used Sickels' end of season update list as he has yet to put out an offseason one.)

Just for good measure, here is a table with the number of prospects per team. I have also included the total number of ranking points for all of the prospects on each team. Ranking by descending total gives a fairly good measure of organizational strength. (Cubs, Red Sox, Pirates, Astros, Twins at the top and Giants, Athletics, Tigers, Brewers, Angels at the bottom.)