The Yankees can trust David Robertson

After spending nearly one half of a billion dollars this offseason, the Yankees success could hinge on the $5 million arm of David Robertson.

Share All sharing options for: The Yankees can trust David Robertson

Before Mariano Rivera, there was John Wetteland. And in 1996, the first year of the Joe Torre-dynasty Yankees, before Wetteland entered, there was Mariano, a young pitcher with machine-like efficiency dominating the set-up role.

Despite spending nearly one half of a billion dollars this offseason, the Yankees still have one giant void to fill. How will they replace the greatest closer of all-time? The answer is a 28-year-old arm who, much like Rivera in 1996, has excelled in the set-up role for multiple seasons in the Bronx.

David Robertson takes on the unfathomable task of assuming the closing role held so long by a legend. He's the band on the Ed Sullivan show the night after the Beatles. He's the response speech after the President's State of the Union. Easily overshadowed by the grandeur of stature preceding him, the right-hander is still garnering our attention due to the responsibility that comes with following such a great act. Simply put, how Robertson is able to master his new role might go further in defining the Yankees' success than any individual offseason move made this winter.

Just as hundreds of bands dressed in three-piece suits and perfected their haircuts to resemble the Beatles, the dominant pitch used by Robertson mimics Mariano. According to Brooks Baseball, nearly 80% of his pitches are cutters. Where he distinguishes himself from his predecessor's style is his curveball. A secondary pitch that all mortal pitchers not named Mariano need to perfect in order to find success in the majors. Robertson uses it when ahead in the counts to both righties and lefties, generating swings-and-misses, as well as ground balls, per Brooks Baseball.

No position in baseball carries the importance of being able to perform under intense pressure like the closer role. That is why Mariano is the best of all-time. He recorded saves in excruciating one-run playoff games as flawlessly as he did in middle-of-August regular season games with an extra three-run advantage.

The question Yankee fans have for David Robertson is not whether he can get the save in April or May, but the all-important ones in September or October. The ones against the Red Sox in July when they are playing for first place. The key saves during the playoffs. A lot of the Yankees success, in the late-nineties especially, was built on their confidence in Mariano. That is why Robertson's success is so crucial, as the Yankees try to maintain that air of invincibility late in games.

Looking at Robertson throughout his career, there is no reason to believe that he can't succeed as the Yankee closer. In fact, his performance typically improves as the level of pressure increases.

Baseball-Reference categorizes relief appearances into high, medium, and low leverage situations. Leverage quantifies the importance of a collection of plays based on their impact to the team's win probability. A reliever entering a game in a high-leverage context means that the situation will have a big impact on the team's chances of winning. Since 2008, Robertson's performance follows the leverage index—he is tougher to face when the pressure is higher. 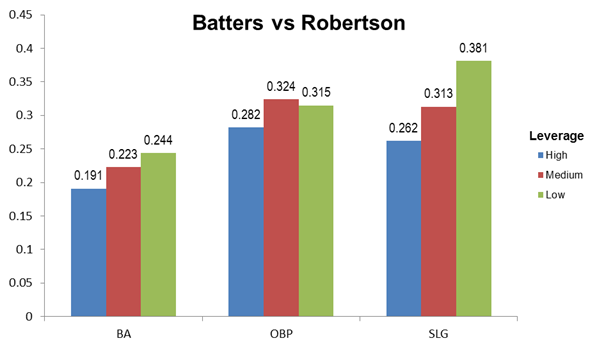 FanGraphs has an excellent statistic that can be used to evaluate the performance of relievers. Using win probability added, there is a counting statistic that totals the number of shutdowns (games in which the reliever improved the team's chances of winning by at least 6% during their time in the game) and meltdowns (the number of times they contributed negatively, or made the team at least 6% less likely to win). I like to look at meltdowns because regardless of the situation—high, medium, or low leverage—when the reliever enters the game, if they completely melt down, every appearance can result in a negative 6% win probability. Shutdowns are reserved for situations when the game is in a high enough leverage context that the pitcher can add 6% win probability by escaping a jam or getting three critical outs.

Shutdowns and meltdowns in 2013

Bryan Grosnick •Beyond the Box Score

Bryan surveys the best relievers across baseball in terms of shutdowns and meltdowns.

Shutdowns and meltdowns in 2013

Since Robertson made his debut in 2008, he has followed a remarkably close innings count to Mariano Rivera. The average leverage index when he enters the game (gmLI) is not quite as high, which makes sense with Mariano closing, but in terms of meltdowns per innings pitched, he is right on par with the great Mo. Since we can't compare save opportunities and blown saves, with Mariano being the primary closer, we can look at meltdowns which is a counting statistic for how often a reliever puts his team in a bad situation, whether it is by blowing a lead, relinquishing a tie score, or allowing the opposing team to draw the score closer. David Robertson has fared incredibly well when compared to one of baseball's all-time great relievers. The question is how he will continue his performance when facing even higher pressure situations in 2014.

The Yankees found themselves forced to spend nearly $500 million this offseason to make up for a depleted farm system that has failed to develop major league talent to replace the squad's aging stars. It turns out that David Robertson, a 17th-round pick in the 2006 draft, may be the key to their success.

The Yankees have always been able to count on closing games with incredible efficiency since the John Wetteland days. Based on his performance over the past six seasons, they can likely count on David Robertson to continue that trend into 2014 and beyond.