Strikes outside the strike zone: skill or luck?

Is it possible some pitchers are better than others in getting strikes on pitches outside the strike zone? Using PITCHf/x data can help provide the answer.

Share All sharing options for: Strikes outside the strike zone: skill or luck?

PITCHf/x data is both a blessing and curse. Sites like Brooks Baseball have changed the way pitching is viewed, but with over 700,000 pitches thrown each year, the amount of data can be overwhelming. The interface at Brooks is wonderful for individual pitchers, but doesn't allow for comparisons. This creates another instance where I can promote someone I've run across in the past six months and have really come to respect -- Daren Willman, who runs Baseball Savant. Part of his site includes a PITCHf/x search form that allows filtering through the approximate 4.2 million pitches thrown since 2008.

Searches need to be kept narrow since the amount of data can quickly become overwhelming. For this post, I wanted to find out how many pitches outside the strike zone were called strikes, and how many were called strikes vs. swinging strikes. I also was curious how often this happened with two strikes.

That's already too many questions, so I went with the last one--how often did a player strike out, either called or swinging, on balls outside the strike zone? I gathered the data and winnowed it down to a manageable set, choosing pitchers with at least 1,000 pitches, or 500 for current pitchers for a total of 863 pitchers. This chart breaks down how often they got a strikeout on pitches outside the strike zone: 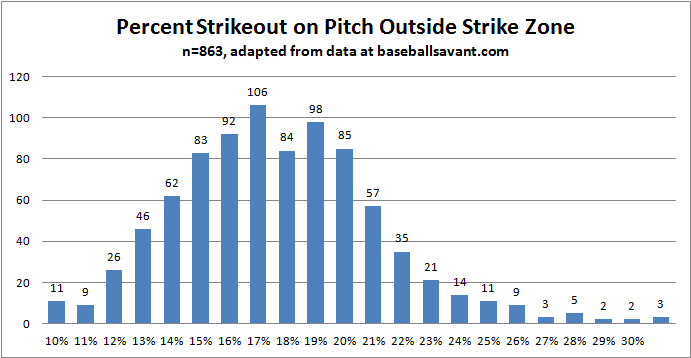 17.4% of the time these pitchers recorded a strikeout on a pitch outside the strike zone. The vast majority (81.5%) were on swinging strikes.

This chart shows the best at getting called strikes:

To explain the table, Justin Duchscherer has thrown 2,385 pitches in his career, of which 1,529 were outside the strike zone (OZ). 434 of those pitches were with 2 strikes, with 39 (9.0%) resulting in a swinging strikeout and 42 (9.7%) resulting in a called third strike. It's impossible to determine if these pitchers got the calls due to reputation or skill, but certainly fun to speculate upon.

I was more interested in total strikeouts, since a swinging strikeout on a pitch outside of the zone is a credit to a pitcher as well. There will be duplicates from the previous table:

This is why I chose Craig Kimbrel's picture--he has 381 strikeouts in his career, and 240 (63%) are on pitches outside the strike zone. I leave it to others to determine if closers are better at this because hitters face them less frequently, and as more data becomes available, it will be very interesting to see if these tendencies change over time. Since I'm a Cubs fan, I'll show Carlos Marmol: 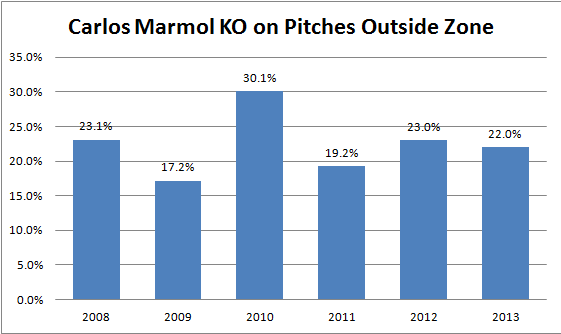 Chicago fans often wondered why hitters didn't just sit at the plate and wait for Marmol to walk them, and that did appear to become the case after his very outstanding 2010.

I need to make it absolutely clear I'm not sure any of this has any relevance in the larger sense. We use statistics to make inferences and predictions, and sometimes numbers are just numbers and not indicative of a larger trend. In addition, the PITCHf/x data is still so new that until there's complete career data for the best pitchers of a generation we're still making little more than guesses. That doesn't mean it can't be interesting to see if there are trends, and the data and interface Daren makes available at his site allows for some fun investigating.

I've left the best for last--Daren also includes data on catchers...and umpires. Stay tuned to see if any variations exist in those groups.

All data from baseballsavant.com, and a big thanks to Daren Willman for his willingness to add features when I ask. I can't explain how guilty I feel when he adds something and my first response is "Could you add this too?" when my reaction should be "Holy buckets, do you have any idea how long I've been looking for that???" Since I amalgamated over 4 million lines of data, there is the possibility I made mistakes, and those are my responsibility.