A Graphic Look at Pujols and His Bad Contact 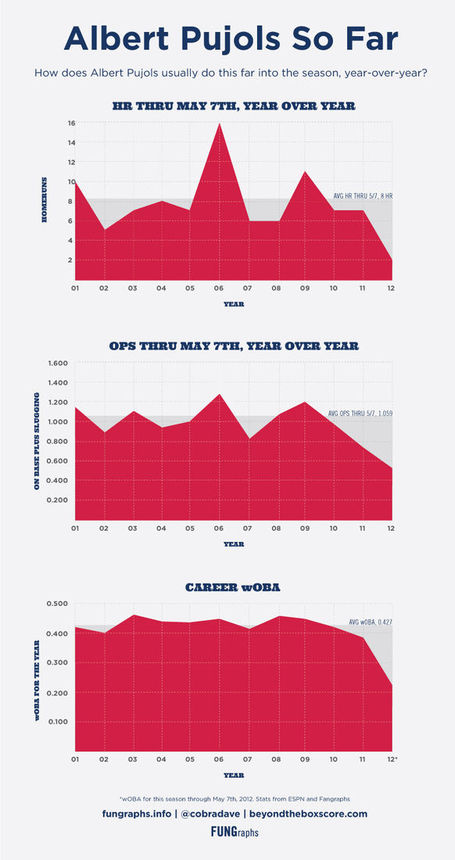 Well covered early into the season is the struggles of the newly highest paid player in baseball, Albert Pujols. Although going into his age 32 season, we know there's some sort of decline coming. Angels GM Jerry Dipoto knows this, even calling out this issue amidst the signing:

Albert has spent many years operating at peak, and if we want to call a decline going from superhuman to just great, I don't think we've seen the last great days of Albert Pujols...

No one expected this. It's easy to look at HR decline, but what are some of the underlying components behind this. OPS through yesterday is obviously down, but his career wOBA has been below his 0.427 average since 2010. What's wrong this year?

Buster Olney in an ESPN Insider piece over the weekend pointed out some generalizations about this year's slump:

Some talent evaluators who have watched Pujols believe his issue is not that complicated: He's really anxious, expanding his strike zone. "When he's locked in, he's not swinging at a lot of bad pitches," said one scout. "But he's getting behind in the count and getting himself in trouble."

He has 16 SOs over 117 ABs. His SO totals through May 7th in past years don't really look too different as he averages 12 SO per year 27 games in or so in his career.

Other stats to note:

Note, his HR/FB goes from a career 19.4% and 3-year avg of 18.9% to a whopping 2.6% this season. The hard hits are simply not going anywhere by the outfield gloves this season.

His ISO supports this as well this season:

Hoping that with his unusually low BABIP might just be a sign of bad luck and not a terrible decline.