Share All sharing options for: Number of Durable Hitters and Team Success

Last week, I posted the results of my research on how the number of 200-inning pitchers that a team has can affect its success in the regular- and post-season. (Short summary: more inning-eaters = more regular season wins, but not necessarily more playoff wins.) This week, I thought I'd take a similar look at how durable hitters can affect a team's record.

For the purposes of this post, I defined a durable hitter as one who got at least 600 plate appearances with the team. That's about 20% more than the minimum needed to qualify for the batting title. For reference, a 200-inning pitcher has thrown 23% more than the minimum to qualify for the ERA title. Just like last week, I'm looking at the period from 1996 until 2011--the One-Wild-Card-Per-League Era, minus the strike-shortened 1995 season.

Here's an infographic that summarizes the results of the study: 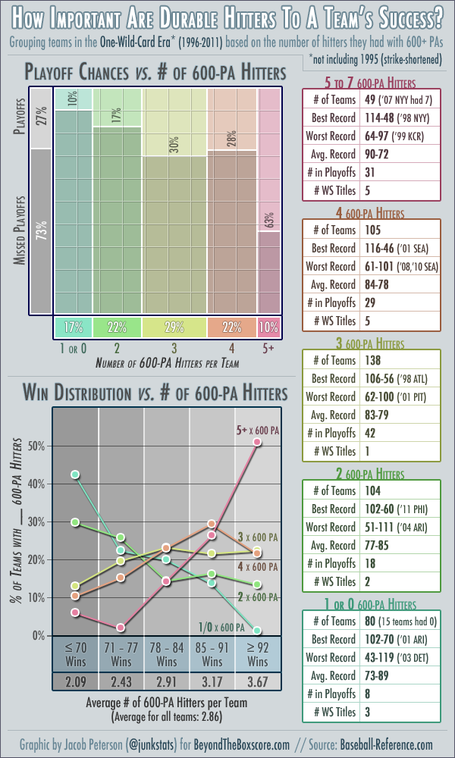 Similarly, the average number of durable hitters on a team rises along with its win total. Teams with 92 or more wins had 75% more durable hitters, on average, compared to teams that won 70 or fewer games.

One notable difference from the inning-eating starter study is that, in this sample, there was a clear difference between the leagues. While pitchers were essentially no more likely to top 200 innings in the AL compared to the NL, AL hitters had a large advantage in reaching the 600-PA plateau. Overall, AL teams averaged 3.12 durable hitters per team per season, while NL teams averaged just 2.63. Presumably, this entire effect can be explained by the DH rule.

* The Mets, the Giants and the A's

Next, let's discuss postseason results. In the starting-pitcher study, I found that having more 200-IP starters was a large advantage overall, those extra durable starters didn't seem to help a team once it was already in the playoffs. Here, the results agree on the first point but are ambiguous on the second.

If you look at only the teams that made the playoffs, though, the results seem less straightforward. Consider:

It should also be noted that in 2 of the 3 cases when the World Series champions had just 1 hitter reach 600 PAs, that hitter was Albert Pujols*, with the 2011 and 2006 Cardinals. Perhaps Pujols (or Tony La Russa, or Dave Duncan) has a gift of leading flawed teams to improbable championships.

* In the third case, Luis Gonzalez was the lone 600-PA hitter on the 2001 Diamondbacks.

Finally, I should point out that there's more to reaching 600 PAs than just staying in the lineup (though that's obviously a big part of it). Better-hitting teams will turn the lineup over more quickly, thus giving everyone on the team more chances to bat. And since we'd expect better-hitting teams to make the playoffs more often, that no doubt helps explain a significant part of the advantage that many-durable-hitter teams seemed to have in reaching the postseason.