Here's an interesting take from Arash. While I and others may not agree with the conclusion, it does pose several interesting questions. I would note the use of "victim" is unfortunate considering his current contractual demands -- which will likely be met, this season or next. -ed. 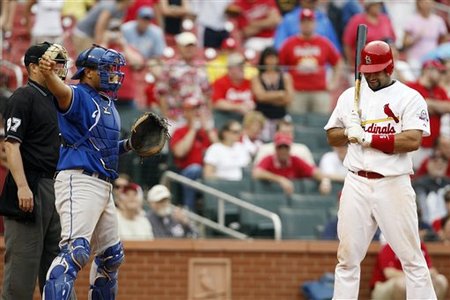 As a diehard Cubs fan, I know firsthand how good Albert Pujols is.

The damage caused by the steroid era is unfixable. Records and numbers were inflated drastically as players began cheating left and right. Everyone was a victim, from old-timers, to clean players, and last but not least, the fans.

The biggest victim of all is the King himself, Albert Pujols.


It all started his rookie year. In 2001, Albert won the Rookie of the Year honors while batting .329, hitting 37 home runs, and driving in 130 runs all as a 20 year old. He finished fourth in the MVP ballot. The winner that year was Barry Bonds, who, as it's widely assumed, took steroids.

The second man on the MVP ballot was Slammin Sammy, who has been linked to performance enhancing drugs.

The third man was Luis Gonzalez. Gonzalez had an interesting year, hitting 57 home runs and driving in 142 runs. With the exception of that season, Gonzalez had one season in his whole career where he hit more than 30 home runs, and he hit 31 that year. To me, that's very suspicious.

Adrian Beltre was second in the voting, but he had a very suspicious season, comparable to Luis Gonzalez's 2001 year.

Finally, in 2005, justice was served, and King Albert won his first MVP. In 2006 Albert was second in the MVP voting to Ryan Howard. Howard has been consistent with his numbers and has not been linked to performance enhancing drugs, so he won fair and square. In 2007, Albert had an off year and finished ninth in the voting. In 2008 and 2009 Albert won back to back MVP awards.

In my opinion Albert Pujols should have seven, yes seven, MVP awards, which would make him the all-time leader in MVPs (Barry Bonds has seven). However, to assume Barry Bonds, Sammy Sosa, Luis Gonzalez, and Adrian Beltre all used performance enhancing drugs might be unfair. Just because Luis Gonzalez and Adrian Beltre had one great year and were never able to duplicate it doesn't mean they used performance enhancing drugs.

In addition, you can't go back and take away MVP awards, but, hypothetically speaking, let's say we can. I'll let you be the judge. How many MVPs should Albert Pujols have?