Share All sharing options for: A Graphic Look at the OTHER Rookie of the Months for April 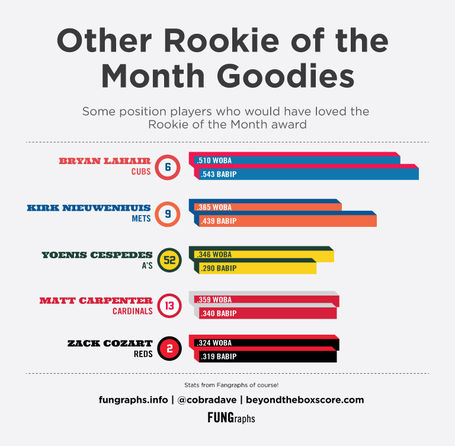 Happy Friday! This has been a crazy week for baseball news. Harper's on a tear along with giving us tons of video to watch, there's Weaver no-no, Chipper's late inning walk-off HR, the injury news of the Panda's hand today, and sadly, Mo Rivera's torn ACL. Along with the end of the first month of the season, the Rookie of the Months were awarded, respectively to the Diamondbacks SP Wade Miley and the Rangers SP Yu Darvish. Now if it wasn't for Miley's 1.60 FIP and absurd 0.107 opponent BABIP and Darvish's 3.19 FIP most likely his 4 wins, it's likely these other candidates would have won. Were there other's that were deserving?

1B Bryan LaHair was the only one of this list that apparently didn't receive votes. He played out of his mind, and as mentioned in my "Who's Hitting in April" graphic earlier in the week, he's amongst league leaders in OPS at 1.251. His wOBA in turn is high, 0.510, but his absurd 0.543 BABIP indicates his stats will likely fall.

OF Kirk Nieuwenhuls has emerged in CF, replacing injured Andres Torres and has created some possible issues with his return this week. Now I would think keep the hot hand in the lineup. Nieuwenhuls with a 0.365 wOBA and a 0.439 BABIP. His 1.9 UZR is slightly above Andrew McCutchen's 1.7 UZR.

OF Yoenis Cespedes has been exciting as expected and a happy reason to see the otherwise revolving lineup of the A's. Evidently playing in CF as Demigod, in the AL, his UZR, -2.7 is just right above Curtis Granderson's -7.2. His wOBA of 0.346 is respectable, but BABIP of 0.290 isn't all that good and hopefully will go with with some outfield bloops. I imagine his rookie-leading 5 HR was part of the reason he's also on here.

1B/3B Matt Carpenter (spent 18/23 games at 1B) has been making the most of his playing time there in the light of 1B Lance Berkman's injury. For the time being, Sully Baseball pointed out that obviously, he's a better deal and is also outslugging former 1B Albert Pujols. His 0.349 wOBA and 0.340 BABIP is near the top of the Fangraphs rookie leaderboard, comparable to Yoenis Cespedes mentioned above.

SS Zack Cozart was one I was watching going into the season and has a 0.330 wOBA and 0.329 BABIP. He's on the bottom of this list but worth a mention. If you wanna take a look at the Fangraphs rookie leaderboard I generated, he's slightly above average on wRC+ with 106, while the others mentioned all have a 123 wRC+ or higher.