Here's an analysis out of the fanposts section from last month, which definitely deserves a front page look. I've done some minor edits for presentation purposes. -jbopp

As I started preparing for the fantasy baseball season, I found myself wondering which pitchers would maintain their low ERA despite their higher peripherals and which pitchers I should shy away from even though they have great peripherals.

I couldn't help but think that there is some missing piece, a systematic flaw, in the peripheral metrics like FIP and SIERA. I then started thinking about what that flaw could be. For a few weeks I made no headway at all, until it just came to me.

I thought back to this article I once read on Johan Santana consistently outpitching his peripherals. The article hypothesized that Santana's success in undeviatingly overperforming his peripherals had to do with his changeup inducing weak flyballs. The reason something like this would lower Santana's ERA while not effecting his FIP or SIERA is because peripheral based metrics cannot differentiate between flyballs. All flyballs are looked at the same in a stat like SIERA, which is obviously not true, but does not make any quantifiable difference to the vast majority of MLB pitchers. Apparently it does for changeup artists like Santana.

I used the same concept about changeups to try to understand the opposite, pitchers who underperform (ERA wise) their peripherals. I went to Fangraphs to check if pitchers with an ERA consistently higher than their FIP, tend to throw their changeups less often.

As you can see, out of the 19 pitchers only four threw their changeups over 11% of the time. This shows that the pitchers who have most recently been underperforming their FIPs, tend not to throw a lot of changeups, which is exactly what I was looking for. Wanting to take my analysis a step further, I then took all qualifying pitchers from the years 2009-2011 and correlated their changeup usage to their ERA-FIP. 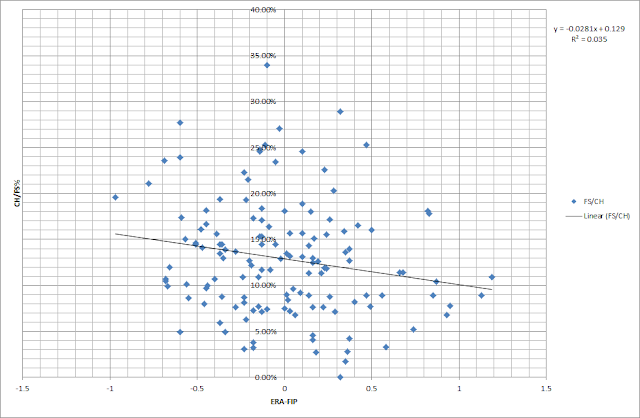 Though not incredibly steep, there is a downward trend correlating pitchers who throw less changeups to higher than anticipated ERAs. The R is close to .2, which does not even come close to explaining the entire ERA to FIP discrepancy, but it does tell us that the less you throw a changeup the more likely you are to have a higher than expected ERA.

The real question is why. Why do pitchers who throw fewer changeups consistently underperform their FIP? To this I have no answer. We do know that changeups depress ERA and by not utilizing one you'll probably have a higher ERA than expected, so we now know the importance of a changeup.