Trends in Negative WAR Players since 2002

Share All sharing options for: Trends in Negative WAR Players since 2002 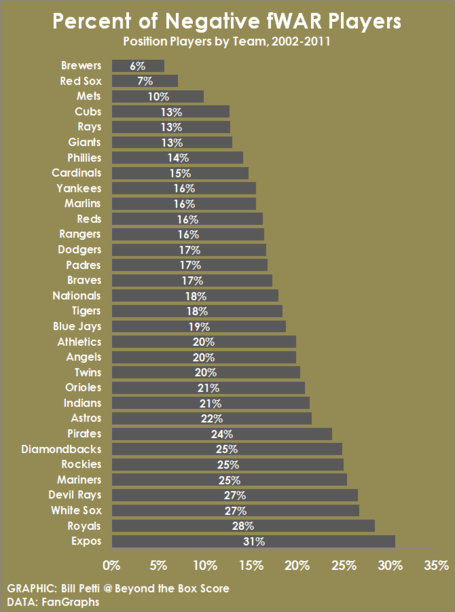 Thanks to nifty constructs like Wins Above Replacement, we can tell when a player in the major leagues actually provided less value to a team than a replacement-level player available on the free agent market or within a team's minor league system.

Every year there are players that finish with a negative WAR--meaning their accomplishments (if we can call them that) actually provided negative value to a team compared to an available replacement. Now, some times this happens because a player succumbs to injury, but often times the player just had a plain bad year.

I was curious about the rate at which we find negative WAR players in the league and if the rate has changed at all over the past few years.

I decided to use the WAR calculation from FanGraphs--mainly because the data was much easier to download than Baseball-Reference--and looked for the rate of negative WAR seasons by year across the major leagues. 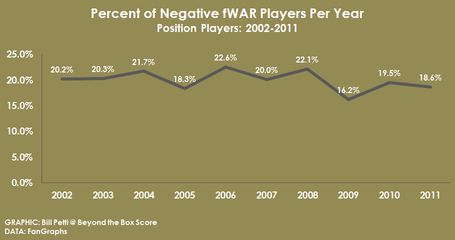 Generally speaking, since 2002 the average percent of position players with >=100 plate appearances in a season that will post a negative fWAR is right around 20%.

Now, there is a slight negative trend to this since the 2002 season. I am not sure whether this tells us that teams are making better judgments about players and who to give time to, or if it's just random based on injuries, etc. Generally speaking, there doesn't seem to be all that much variation year to year in the league.

Since 2002, there have been 130 position players who earned negative WAR in every season for which they accumulated >=100 plate appearances. Four players managed to turn the trick in all three of their qualifying seasons (Kerry Robinson, Josh Paul, Enrique Wilson, and Pablo Ozuna). There were 14 players that did it their only two qualifying seasons.

In terms of the most negative fWAR seasons overall, there were three players tied with 5: Gary Bennett, Mark Teahen, and (surprise, surprise) Ken Griffey Jr.

Over nine seasons since 2002, Griffey actually turned in more negative fWAR seasons than positive (5 vs. 4).

The graphic at the top of the column ranks teams in terms of the total percentage of 100 PA seasons they have given to negative fWAR player since 2002. (Keep in mind this does not count the 438 players that played for more than one team in a season.)

In terms of how well teams have avoided giving negative fWAR players significant playing time (or, again, how lucky they have been here), we find that, outside of the Expos in 2002-2004, the Kansas City Royals have given the largest percentage of 100 PA seasons to negative fWAR players (28%). The fewest? That would be the Brewers with a very low 6%. The Brewers and the Red Sox are the only two teams to be in the single digits since 2002.

Also, I left the Rays and Devil Rays in as separate entities thinking it would give us a chance to see how the new front office has fared compared to the original. Not suprisingly, we see a 14% difference between the new and old front offices. However, the name proxy isn't perfect since the name changed in 2008 and new regime effectively took over in 2006. If we split the data up pre-2006 and post-2006 we actually see that the old front office fared better (16% vs. 24% negative fWAR players). However, a large part of that was the 2006 season, which saw 8 of the 13 100 PA players turn in negative fWAR seasons. If we remove that year, the old and new tie at 16% each.