Expectations for Dayan Viciedo to be a middle-of-the-lineup power bat were high when the White Sox signed him in 2008; thus far, he has failed to meet them. Could he do it in 2014?

When Dayan Viciedo signed with the White Sox in 2008, the expectation was that he could be a middle of the order power bat. From a physical standpoint, he had the build of a prototypical power hitter, which even granted him the nickname "Tank". The numbers he put up in Cuba were also impressive and he didn't do too shabby in the minors, either. He finally received a call to the bigs in 2010 and to his credit, put up a nice slash of .308/.321/.519/.840 in a little over 100 plate appearances. However, since then, Viciedo's career has not lived up to expectations, to say the least. Since 2010, he's posted a .260/.305/.424./.728 slash (or 95 wRC+) and because of his limited skill set, has been worth less than half a win since. But is there still hope for Viciedo to turn it around?

While we know Gomez and Jones were eventually late bloomers, overall, this is not a terribly impressive list to be a part of, to say the least. What's more interesting about this group is their batted ball data and the similarities found amongst our group. Because Encarnacion, Guerrero, Gonzalez, and Guillen were older than 24 by the time battled ball info was available, they have not been included:

This isn't necessarily damning news for Viciedo, but it also isn't encouraging. Let's also remember Gomez and Jones are a lot more athletic than Viciedo and play a premium position, which helps their case. Viciedo is or does neither. In fact, he is quite terrible in the outfield, as evidenced in this GIF, so almost all his value is going to have to come from his bat:

We can also see pitchers are able to exploit this by getting Viciedo to chase pitches up and out or down and away in the zone by looking at his whiff rates over the years. 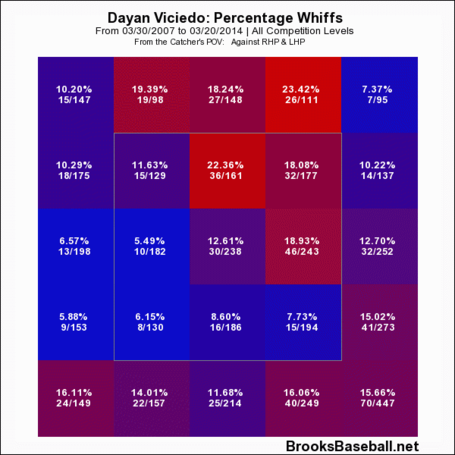 Overall we see an eroding approach at the plate, which doesn't bode well for future success. Viciedo's playing time is already in danger with Alejandro De Aza being moved to left field after the Adam Eaton trade. While chances are Rick Hahn will try to move De Aza before Opening Day, it's obvious patience (oh the irony) is wearing thin. If Viciedo is unable to improve in this facet of his game, chances are he ends up with the Wily Mo Pena's and Delmon Young's of the world.

Despite the poor results, it's important to remember he's only going to be 25 years old this coming season. It's still possible he can turn this around, as seen with Gomez and Jones. However, if he's ever to reach his potential, honing in on plate discipline is vital. He might not ever become the middle of the order bat once envisioned, but any improvement to the current product would be welcomed.