How often do hitters swing at the first pitch, and what happens when they do? 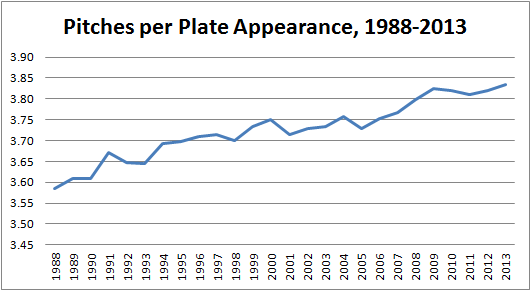 The chart is scaled for dramatic effect and shows an increase from around 3.59 pitches per plate appearance to 3.83, around 7 percent. The number of hits and walks per game was relatively constant, but strikeouts increased from around 5.6 to 7.6 per game. Two trends together increased pitch count--an increased emphasis on the strikeout (and no ball in play) coupled with the hitter's desire to work deeper in the count to increase total pitches thrown and get to middle relievers sooner.

What happens when hitters do make contact on the first pitch? Good things, for the most part--in 2013 hitters batted .336 and slugged .540. There's logic to this--chances are the hitter saw a fastball that only reached 92 mph, a cutter that didn't cut, a slider that didn't break, etc., gifts from the baseball gods that should be capitalized on.

So who are the free swingers on the first pitch and what happens when they swing away? I amalgamated play-by-play data with contact data for 2009-2013 to see (minimum 1500 plate appearances):

1stS%=swinging on the first pitch--Milwaukee Brewer Carlos Gomez swung at 45.8 percent of first pitches in this time span

1stC=making contact on the first pitch, which is putting a ball in play and does not include foul balls--Gomez made contact 328 times

1stC%=percent of plate appearance in which contact is made on the first pitch--Gomez made contact on 36.3 percent of his swings on first pitches

Brooks Chart--the chart at Brooks Baseball.net that shows how pitchers pitch to these batters with the first pitch

These batting averages aren't as stratospheric as they may appear on first glance--the MLB batting average on balls in play (BABIP) in 2013 was .297, and if they're swinging at pitching mistakes, they can improve on that. Even so, there are some healthy averages and slugging percentages in this table.

If Gomez is going to swing at almost half of the first pitches he sees, would it make sense to pitch him outside the strike zone with the first pitch? This chart from Brooks Baseball shows how pitchers have pitched him on first pitch: 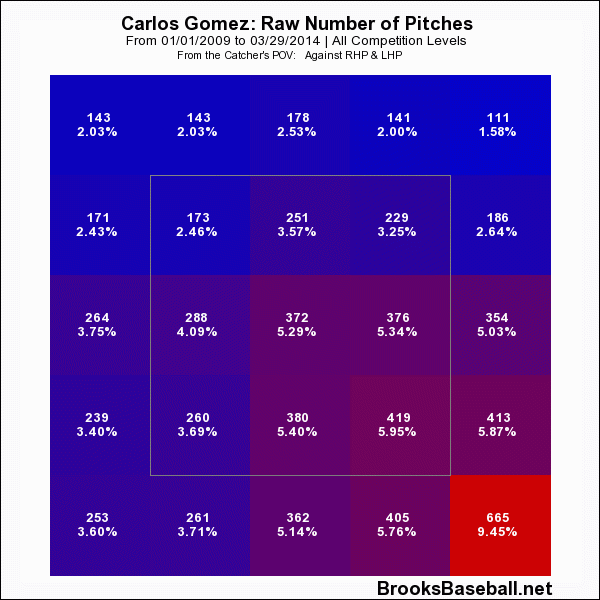 Just over 39 percent of first pitches Gomez saw were in the strike zone, meaning 61 percent were not, suggesting the free-swinging tendencies of Gomez have been factored into how to pitch to him. He hasn't improved with time as his first-pitch swing percent has increased from around 39 percent in 2009 to over 52 percent in 2013. But he is batting almost .350 and slugging over .600.

What about players at the other end of the spectrum?

I use photo captions at the beginning of my posts mainly to amuse myself (and on rare occasion others) and to see if the editors notice, but Joe Mauer, in addition to being one of the better-hitting catchers in recent memory, is also the most patient on the first pitch in this sample. He bats almost .500 when making contact with the first pitch--when he sees a mistake, he makes the pitcher pay, but is very willing to wait for the right pitch, as he's averaged over four pitches per plate appearance in his career.

There will always be tension between seeing as many pitches as possible in a plate appearance vs. pouncing on a mistake early in the count, and in general I endorse patience at the plate. However, the data suggests there are times when patience is not a virtue, particularly if a pitcher throws an extremely hittable pitch. Baseball is about taking opportunities presented and capitalizing on them when they occur, because there's no promise a better opportunity will present itself.

Data from Baseball-Reference.com and Brooks Baseball.net. Any errors in compiling and amalgamating the data are mine.