MLB teams have not treated right field as a skill position akin to "up the middle" positions. But should they?

Major league teams in the process of rebuilding their organization often focus on "up the middle" -- shortstop, second base, center field, and catcher. Players who can handle those positions defensively while contributing above-average offense can be extremely valuable. How similar are third base and right field?

One very large difference between the "up the middle" positions and third and right is just chances. The Balls in Zone stat from Baseball Info Solutions stands for that proposition, although we shouldn't leave out opportunities to make outs outside one's zone, which can be inferred from the number of plays made Out of Zone. Here are the numbers by position for 2013:

In both the infield and outfield, there is an enormous drop-off in BIZ between the "up the middle" positions and the corners. But note the smaller, significant difference between third and first (about 50% more balls in the third base zone) and the even smaller difference between right field and left (about 10%).

The difference in chances between right and left is not very significant; it works out to about one extra ball in zone per ten games, meaning efficiency in getting outs on those balls (RZR) would have to be fairly significant to mean that flipping your left and right fielders improperly could lose you more than a few outs per season. But that's not the only way that right fielders tend to be different from left fielders.

Left field can often be the last starting spot settled by a GM, and for good reason: no special skills are needed there. The better the range, the better the outcome, but even a .100 difference in RZR is only a difference of 22 plays. Right field, on the other hand, often tasks a player's throwing arm -- plays to the plate may be similar in number, but where left fielders throw to first extremely rarely, throws from right field to third are more common.

Both Ultimate Zone Rating and Defensive Runs Saved have components that measure runs saved by an outfielder's arm (ARM and rARM, respectively), but they are keyed to position averages, making them not so helpful for comparing left to right. There's a different workaround for that: who gets played. We'll get back to that.

How much of a difference can a great right fielder make defensively?

First, a look at how many outs we're talking about. There were 18 right fielders in 2013 who qualified for the batting title by virtue of their total innings in right field. The fewest innings in the group were logged by Nelson Cruz (906.1), and Jay Bruce recorded the most (1,438.2). That's a substantial difference, but averaging the group's total RF innings together, I get 1,131. Taking the total BIZ per innings for the group and multiplying it by the average number of innings gave me 193 opportunities, for an average qualified right fielder, to make in-zone plays over the course of the 2013 season.

Of the 18 right fielders in the group, the worst RZR was Torii Hunter's .859, and the second worst was Michael Cuddyer's .883. The best came from Jay Bruce (.968), and the second-best from Marlon Byrd (.965). There were a few others grouped around .950 (I'm looking at you, Josh Reddick, Gerardo Parra and Shane Victorino), so I'm pretty comfortable there -- but I'm tempted to throw out Torii Hunter's total. No matter. I think we're looking at approximately .070 RZR points of variance, which, when applied to our average BIZ number, means approximately 13 extra outs over the course of an average qualified right fielder's season.

Position by position, offense is trending together

Is the baseball landscape changing?

Position by position, offense is trending together Is the baseball landscape changing?

But wait, there's more: out of zone outs. In our group, the lowest OOZ per innings ratio was Carlos Beltran's 0.051; the highest was Shane Victorino's 0.115. There are a cluster of ratios around Beltran's (Cuddyer, Nick Markakis, Hunter, Bruce), but Victorino's was a bit of an outlier; the next-highest ratio was Parra's 0.096. Let's call the variance about 0.045 between "good" and "bad." At our average number of innings, that's 51 extra outs.

Just 13 extra in-zone outs doesn't seem to square with 51 out-of-zone outs, but take another look at the table up top; close to half of outs made by right fielders in general are made out-of-zone. It's just a question of how "zone" is defined. And using average run values of events as a back-of-the-envelope method, just switching fly outs for singles/errors (ignoring that some would be doubles) could mean about 48 extra runs saved per year between a poor right fielder and an elite one -- and that doesn't account for the effect that holding runners or throwing them out can have.

Have teams started to treat right field as a more of a skill position?

I left off on the effect of outfield arms above in part because, in an efficient market, the proof should be in the pudding: if one player is capable of doing things more valuable (or valuably) than another, he should, in theory, get the start. We know that's not always the case, but it might partly be the case. With that in mind, we might determine how much teams are valuing defense from their right fielders by looking at... offense.

If teams all started to place more value on defense at all positions simultaneously, that kind of analysis would not work. But if teams were to increase emphasis on defense in right field more than at other positions, we could expect that to show up in a decrease in wRC+. 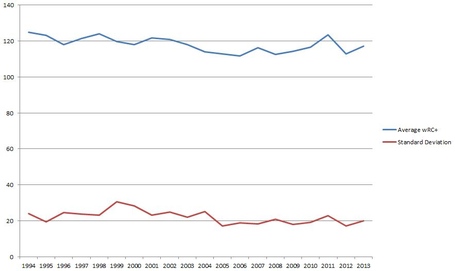 This graph shows the average wRC+ of all right fielders who qualified for the batting title, yearly for the last 20 seasons. "Offense is down" is not a defense to a decrease in wRC+, and so if that's what you see in the graph, it's legit. It does look to me like the average wRC+ of a qualified right fielder has trended down slightly in the last ten years. But speaking more generally, we're still looking at a class of players who are more prized for offense than for defense.

For reference, the average wRC+ for qualified second basemen last year was 109. Hitters who qualify for the batting title tend to be above average hitters. But what if we looked at teams' total wRC+ for right field on a season per season basis? 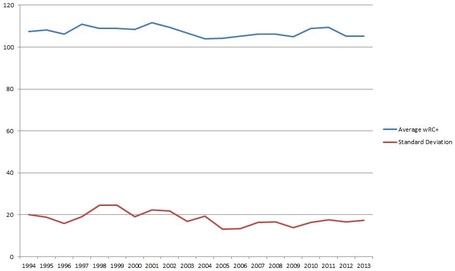 To me, it looks like whatever trend may have been present in the qualified hitter graph disappears. It doesn't look like teams have started to value defense more favorably as compared to offense when selecting right fielders -- at least, not more so than at other positions. But should they?

I think the answer is yes, and it may be that Gerardo Parra has already broken the mold for right fielders. Looking at 2013 Offensive Runs totals for right fielders, we might expect one of the top performers to add about 30 runs' value, as opposed to the low end, which goes only slightly negative (I'm ignoring Ichiro Suzuki, who might get playing time for other reasons, and Nick Markakis). Square that with a potential swing of 40-50 runs of value defensively, and teams might do well to look at right field as more of a skill position.