Gio Gonzalez and his curve

Gio Gonzalez proves how a pitch can evolve over time and still be effective.

Share All sharing options for: Gio Gonzalez and his curve

Gio Gonzalez learned his curveball from his dad. That was when he was 13 years old. Today, pitching in the big leagues for the Washington Nationals, he has perfected the breaking pitch. We see that by looking at his overall performance last season compared to two seasons ago. Gio was not quite as strong. But his curve remained constant, at least in effectiveness.

After being traded in a blockbuster deal from Oakland, Gio Gonzalez put together a fantastic 2012 season. He struck out 9.35 and walked 3.43 per nine, pitching to a 2.82 FIP and 5.1 fWAR. He finished third in the Cy Young voting. It appeared that the only place for him to go was up.

Still, despite relatively no change in vertical movement in his slider and greater movement in his curve, Gio produced fewer ground balls in 2013. Opposing hitters were able to connect more often for line drives. His four-seam, sinker, and change-up all saw drastic increases in line drive rates in 2013. Only his curveball bucked the trend. 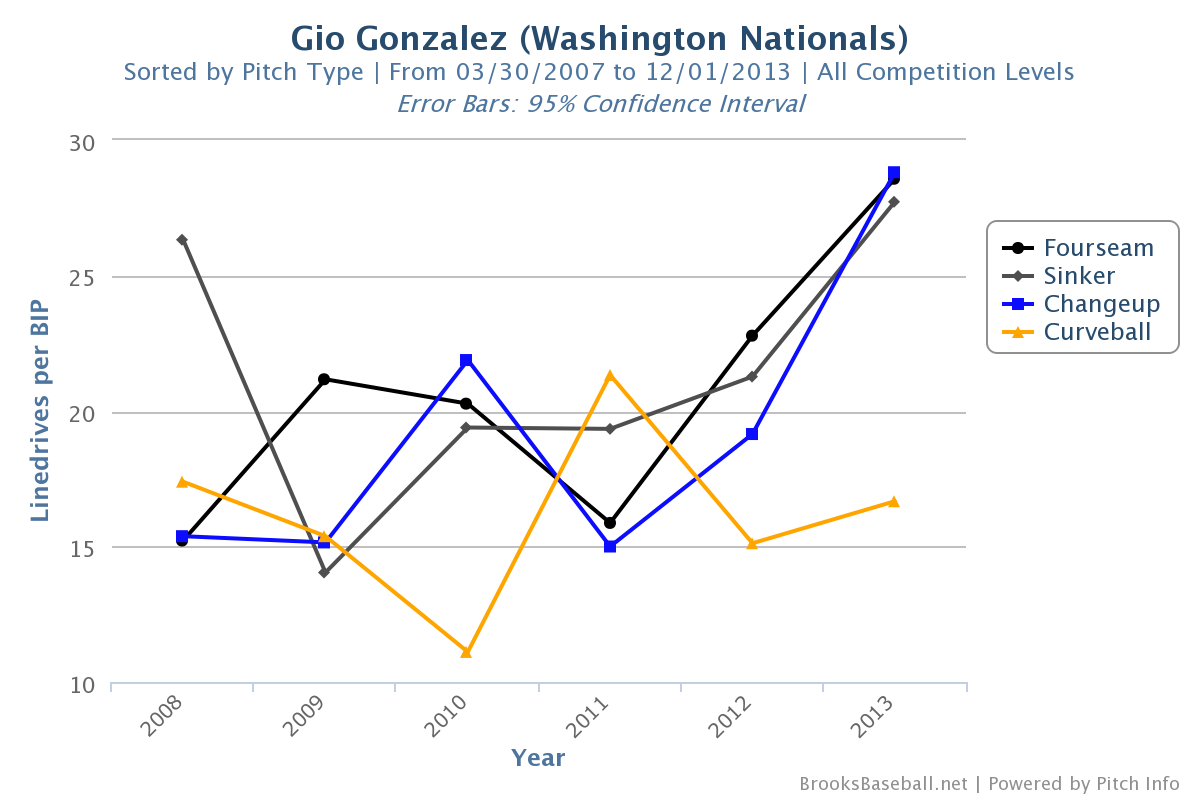 The decrease in ground balls from his curve was clearly not offset by more line drives. Instead, opposing hitters hit the pitch more often for fly balls. In 2012, Gio produced 75.58 GB/BIP to 8.14 FB/BIP. By 2013, he was yielding fewer ground balls (65.38 GB/BIP) and more fly balls (14.10 FB/BIP). The change away from ground balls towards fly balls did not affect Gonzalez performance against hitters when using his curve. Opposing batters slugged .163 against the curve in 2012 and then nearly identically for .162 in 2013.

Gio was able to remain effective with his curve despite a difference in the type of contact hitters made. He also has changed the amount of times he relies on the pitch. After offering the pitch as high as 29.7% of the time in 2010, by 2013, Gio only threw the hook 21.2% of the time. What is interesting is that as Gonzalez has thrown fewer curveballs, hitters have become more patient in their approach. At his high point of usage in 2010, hitters swung at the curve 43% of the time compared to only 34% last season. Although hitters have become more selective, Gonzalez still gets them to whiff at a similar rate, 34.6% in 2013 compared to 36.3% in 2010. 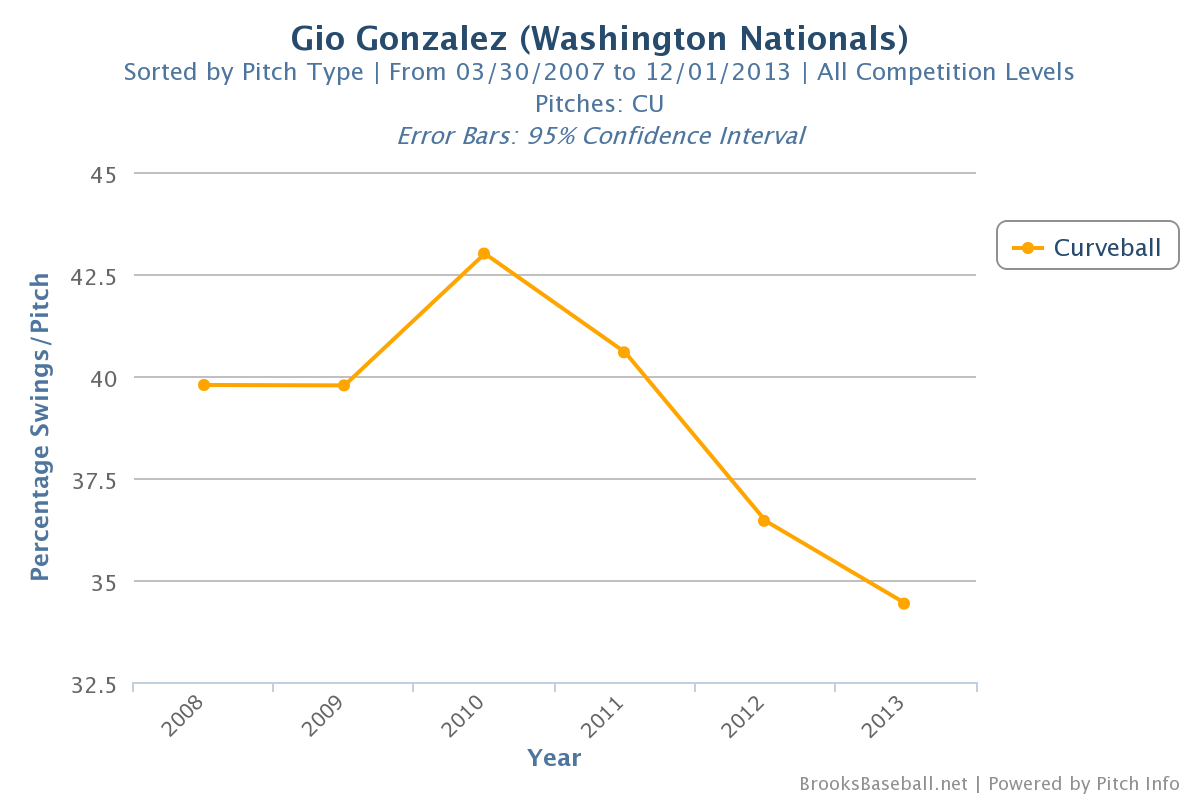 What we are seeing is that despite some fluctuation in usage, vertical movement, and swing percentage, Gio's curve has remained effective in terms of line drive rate, slugging against, and whiffs.

This is when we get into trouble by assuming that a change in a particular aspect of a pitcher's tendencies results in a change in performance. When we compare Gio's curve to the rest of the league, rather than himself in previous seasons, we see why he is so effective with the pitch.

For example, even though Gonzalez produced fewer ground balls with his hook in 2013, he was still extremely effective relative to the rest of baseball. Despite cutting his GB/FB rate nearly in half in 2013 over 2012, he still had the 12th highest rate in baseball among starters using the curveball, per Baseball Prospectus. And while the vertical movement on his curve has fluctuated over the past few seasons, there are few hooks in baseball with as sharp of a drop. Gonzalez' curveball had the 13th most drastic vertical movement in 2013 among qualified starters.

So we know that Gio Gonzalez can throw a nasty curveball. We also know that the pitch has evolved over his career in terms of usage, how hitters make contact, and their approach in swinging against it. What is evident is that no matter what happens year-to-year, the pitch is effective.

A new season is upon us, so keep an eye on how Gio's curve evolves this season. From his first start earlier this week, we can already see that it is still pretty nasty.

All statistics courtesy of Brooks Baseball and Baseball Prospectus.