From July through the end of October, Red Sox closer Koji Uehara dazzled the American League, compiling a 0.58 FIP and a 0.313 WHIP. What changes did Uehara make over the course of 2013 that explain his otherworldly success?

Look, Koji Uehara wasn't “good" for the Red Sox last year. The cupcake I got from the deli last week was good. My parking spot at the mall last weekend was good. “Good" just doesn't cut it.

Uehara was incredible. Although he started the season as the Red Sox' third-string closer*, Uehara took over the job at the end of June and posted a 1.34 FIP through the end of the season. At one point, he retired 37 straight batters, a feat which Baseball Prospectus' Sam Miller estimated had a probability of 1-in-2 million.

* - In fact, here's a season preview that doesn't even rank Uehara as a "key offseason move". 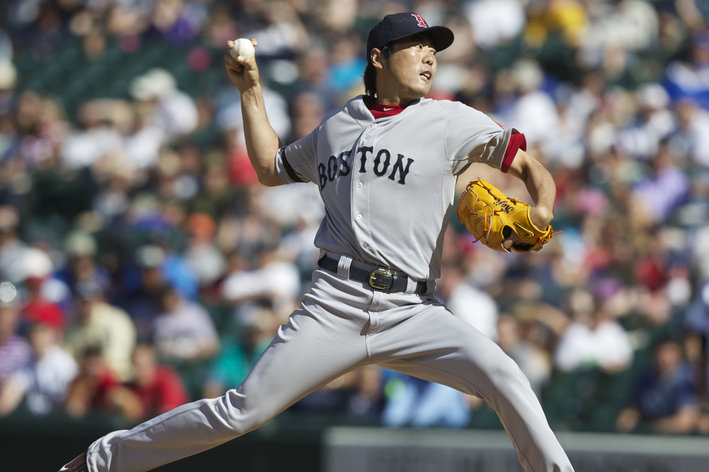 Bryan mentioned the improbability of Koji's 37 consecutive retired batters. Chris Teeter looks at this and other hidden perfect games.

While Uehara has always had impressive peripherals (he's averaged an 11-to-1 K/BB ratio since 2010), he was never a closer before last year. With the Rangers in 2012, Uehara pitched in 37 games. Of those, Uehara pitched in 14 games where the average leverage index was 0.2 or lower. (For reference, a leverage index of 0.2 looks like Josh Reddick's plate appearance against Uehara in this game: bottom of the 7th, Rangers trailing by three.) So what happened over the summer to turn Uehara from good to unhittable? In this article, we'll focus on what made the second half of 2013 so special for Uehara. 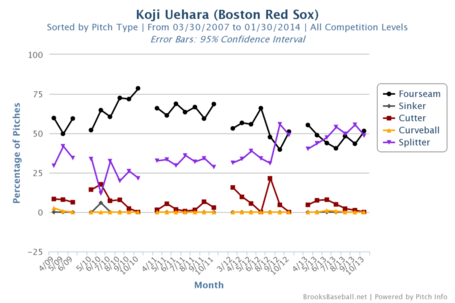 We notice two things from this graph. First, and most importantly, is the increase in the number of splitters. More than half Uehara's offerings were splitters from June onwards. This split is even more pronounced against lefties, where Uehara's splitter percentage went from 40% in 2011 to 50% in 2012 and around 60% after July 1.

As you can see below, this led to career-high whiff totals. I find it interesting that this heavy splitter usage -- and the attendant increase in whiffs -- is presaged by Uehara's performance in September of 2012. During this time, Uehara allowed a mere three baserunners and struck out 19 of 38 batters; this suggests Uehara's performance down the stretch is more than good batted-ball luck. 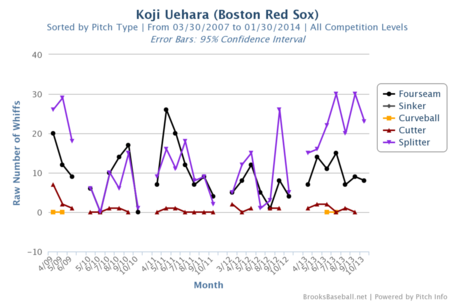 The second point is the gradual phasing out of the cutter, Uehara's third pitch. Although pitching coach Juan Nieves swore otherwise during the World Series, Uehara threw 13 cutters in May, 14 in June, and then 13 through the end of October. FanGraphs' pitch values rates his cutter as below average; by limiting the number of cutters he threw down the stretch, Uehara forced batters to hit his best offerings.

To demonstrate why the splitter is so effective, consider these heat maps from FanGraphs showing the difference between where Uehara locates his fastball (FA, left) and his splitter (FS, right) to right-handed hitters in 2013; the graph for left-handers is similar. From these graphs, seen from the catcher's perspective, we estimate the average fastball crosses the plate a little over a foot higher than the average splitter. Both the fastball and splitter come out of Uehara's hand at similar speeds and follow similar trajectories for most of their trip towards the catcher. The difference in vertical location seen here represents the late break that makes the splitter so hard to identify, and so frustrating for even the best hitters to recognize.

In the second half of last year, Uehara increased the percentage of splitters he threw (especially to left-handers), and his off-balance opponents were held to a .101 wOBA. It remains to be seen whether this adjustment will continue to baffle hitters in 2014, and it's really hard to be so dominant against the best hitters in the world on a yearly basis, but the similarity between his splitter and fastball suggest that Uehara's success could be sustainable.

Bryan Cole spent part of his honeymoon watching the Red Sox win the World Series. He is a contributor to Beyond the Box Score, and can be found on Twitter at @Doctor_Bryan.