Anibal Sanchez's dominant season was overshadowed by Max Scherzer's Cy Young winning campaign and the drama around Justin Verlander's great, but not terrific, performance. Meanwhile, Sanchez pitched extremely well away from the spotlight.

Share All sharing options for: A Change of Pace for Anibal Sanchez

The Detroit Tigers' rotation put up 25.3 fWAR last season. The next closest team was Texas, whose rotation led by Yu Darvish amassed 16.0 fWAR over the course of the season. Max Scherzer was the best pitcher in the American league last year, posting a strong 6.4 fWAR. Anibal Sanchez happened to be the second-best pitcher in the American League by this measure, finishing with 6.2 fWAR.

Sanchez's season was lost a bit in the shadow of Max Scherzer and his utter dominance. Let's take a moment to put Sanchez's year in perspective, though. Sanchez posted more fWAR than the entire starting rotations of the Padres, Twins, and Brewers. Sanchez was worth as much for the Tigers as David Price and Matt Moore were to the Rays combined. Sanchez posted more fWAR than every starting pitcher on the Phillies combined not named Cliff Lee.

A couple of things jump out at you right away from his basic stats. His 9.99 K/9 was a career high, but his walk rate didn't increase significantly over the past few years. His 3.74 K/BB ratio is also the best of his career, showcasing how well Sanchez was able to get strikeouts without a significant jump in walk rate.

Sanchez's HR rate was also very low, 0.45 HRs per 9 innings, a full hundredth of a point below his 2010 season. To give some context, that means that Sanchez gave up 9 home runs over the 182 innings he pitched in 2013.

Sanchez's BABIP is somewhat interesting as well, in that his .307 BABIP against isn't as low as one might expect. His BABIP is actually pretty much in line with his career average of .301, so there's really not much to see there.

How did Sanchez do it? He has an arsenal of five pitches, but in 2013 he relied primarily on just four of them. His curveball usage dropped from his career averages, but Sanchez threw his changeup about 6% more than his career average.

The increase in changeup usage is interesting because it is arguably his best pitch. In fact, according to Fangraphs' pitch values, Sanchez's changeup has been his best pitch in every individual season since 2011. In 2010, the last year where Sanchez's changeup had a negative pitch value, he generated 32.13% whiffs on swings. That is, if he got 100 swings on changeups, roughly 32 of them would be misses. Last season that figure jumped to 41.75%, a substantial increase. Couple that with increased usage and Sanchez is generating a lot more whiffs than he did previously with his change.

The chart below shows the small but significant change in Sanchez's changeup movement. Please note that this is for illustrative purposes (I've edited the image for clarity) and raw / non-altered data and images can be found on the Brooks Baseball site. 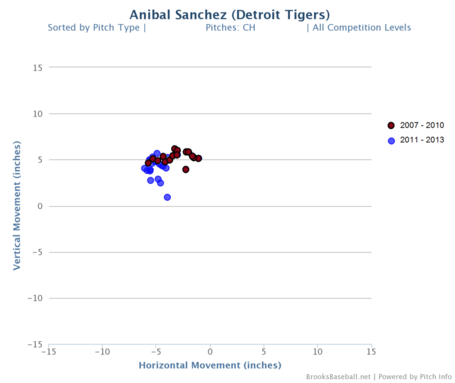 Another difference is that the velocity on his change has increased roughly 2 mph over that same time frame. Below is a graph showing Sanchez's changeup velocity over time. There is a clear uptick in velocity starting after the 2011 season. 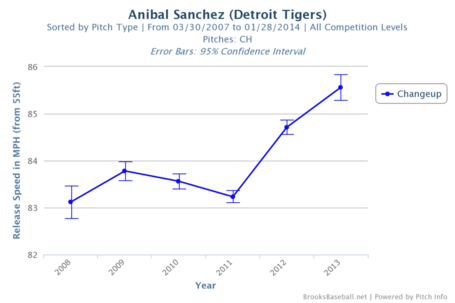 This uptick in velocity, coupled with increased and consistent movement has made the change a versatile tool for Sanchez. Another interesting note is that his release speed for his change matches the release speed for his slider almost perfectly. If a batter was using pitch speed to judge the pitch coming from Sanchez, however unlikely that may be, it would be incredibly difficult for them to tell whether the ball would break to his glove side (slider) or his arm side (changeup).

Anibal Sanchez's changeup has quickly become his best pitch. It provides balance and gives him a fourth tool to match his fastball, sinker, and slider when facing opposing hitters. His changeup predictably helps settle some platoon issues when coupled with his slider. It should be noted, then, that the best any hitter (right-handed or left-handed) batted against either his slider or changeup last season was the .229 mark righties had against his slider.

The best slugging percentage against either pitch? That would be right-handed batters with a .369 SLG also against his slider.

Sanchez was dominant last season, and his changeup was a large reason why.