Can Yasiel Puig keep it up?

Yasiel Puig had a stellar first year with the Dodgers in 2013. Can he maintain his production? Let's see what history shows.

Share All sharing options for: Can Yasiel Puig keep it up?

By any measure Yasiel Puig had an outstanding first year with the Dodgers in 2013. He hit for power and average and played an excellent defensive right field with 8 assists in 175 chances. His base stealing left something to be desired (11 of 19), and he could reduce his strikeouts, especially if he continues to bat at the top of the Dodger lineup.

Having written this, as a Cubs fan, I'd be ecstatic to see his name penciled in the lineup batting third and playing right field for the next 10 years, and I don't think I'm exactly a voice calling in the wilderness on that count.

I was curious if past history gives us any guidance regarding how well Puig might perform in his second year. I used a Baseball-Reference Play Index search to find all players since 1901 with at least 400 PA and a batting average of .300 or more in their first year and then checked their second season performance.

This generated a list of 79 players. One player, George Anderson, was a Federal League player in 1914 and 1915 with a brief career with the Cardinals in 1918, so I removed him. Two others, Buzz Arlett and Irv Waldron, played only one year (read more about Arlett on p. 133 of the New Bill James Historical Baseball Abstract). Taking out Puig leaves 75 players, with their aggregate numbers shown in this chart:

James also wrote in the Historical Abstract (p. 473) that "Major League Baseball is exactly the same game as minor league baseball, except that it has more good players. If a man hits in the minors, he will hit in the majors. Always." My point in quoting this is that while hitters can improve as they develop and mature in the majors, hitters who were already good hitters tend to stay that way. The table bears it out since these players didn't exactly plummet in their second year.

What about more recent players? This table shows players whose careers began in 1990 or later: 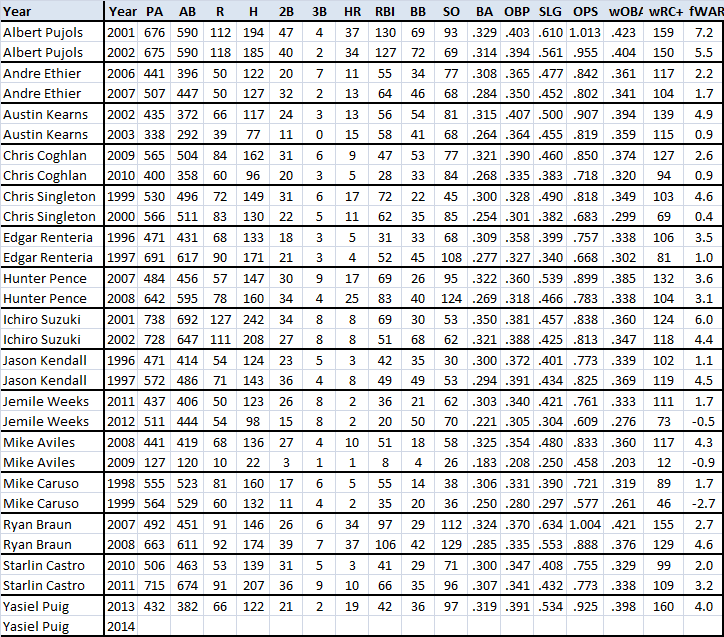 There is a wide range of stories among these players. Albert Pujols, Ryan Braun, Ichiro Suzuki, Hunter Pence, Edgar Renteria, Jason Kendall and Andre Ethier were all steady to spectacular players, Mike Caruso and Chris Singleton had injuries early in their careers and the jury is still out on Starlin Castro, Jemile Weeks and Chris Coghlan.

Every baseball fan is salivating over seeing Puig for an entire year, and he's young enough that even if he does decline, he has plenty of time to bounce back. In the list of 78 players there are 12 Hall of Famers plus two safe bets in Pujols and Suzuki. There are even two sets of brothers, Paul and Lloyd Waner and Joe and Dom DiMaggio.

Every facet of the game is under intense scrutiny and any advantage teams find to reduce Puig's effectiveness will be exploited. A quick look at Puig's split data by month shows a decline as the season progressed, but it's too soon to draw conclusions. He hit well in the minors, and while pitchers will adjust to pummel his weak areas, good hitters adjust as well.

We'll find out soon enough. The Dodgers' roster is loaded, featuring Adrian Gonzalez, Hanley Ramirez and pitchers Clayton Kershaw, Hyun-jin Ryu and Zack Greinke, and that's before Matt Kemp is figured in. A lineup like this allows Puig to be merely outstanding instead of the once-in-a-lifetime talent he appeared to be in his first month. It should be very fun to watch, and there's no reason to believe Puig won't be able to maintain or perhaps even build upon what he accomplished in 2013, which is the last thing every other NL West team wants to hear.

All data from Baseball-Reference.com and FanGraphs