Taking a graphical look at the American League MVP race.

Share All sharing options for: Visualizing the AL MVP Race

"Can't should never be in a man's vocabulary, because when you say can't you aint a man!" - Quincy McCall, Love and Basketball, 2000

"It's kind of problematic given how the computation and replacement level changes on occasion as well." - Bryan Grosnick on graphing cumulative WAR, August 2013

One quote is from a fantastic movie and the other is from a decent managing editor, but those quotes together bring us to today, where I'll attempt to graph cumulative WAR to illustrate the American League MVP race.

wRAA changes - wRAA is adjusted for park factors as the season goes along, which is why wRAA doesn't match up with Batting Runs if you look up a player's Fangraphs page. wRAA is available in game logs and is the best indication of "total offense" that we can get for graphing cumulative batting value.

Fielding, Base Running, and Adjustments aren't on a game-by-game basis - Yeah, this kind of defeats the purpose, especially in the case of a Mike Trout, where his defensive value was low earlier in the year but has come around. This is exactly the kind of change we'd hope to capture here, but the best we can do is spread these metrics out over all games played (plate appearances would have worked, too). Perhaps, given the inconsistencies and variances in these metrics, this is actually best, though. Basically, then, we're looking at cumulative wRAA on top of a non-batting constant.

The totals don't match - In part due to the wRAA adjustment and in part due to a change in the runs-to-wins formula (and probably some other stuff), our total values shown below don't equate exactly with WAR.

With all of that said...

This is just for fun, anyway. We're not trying to prove anything or pick a winner, just show in graphic form how the MVP candidates have progressed throughout the year. 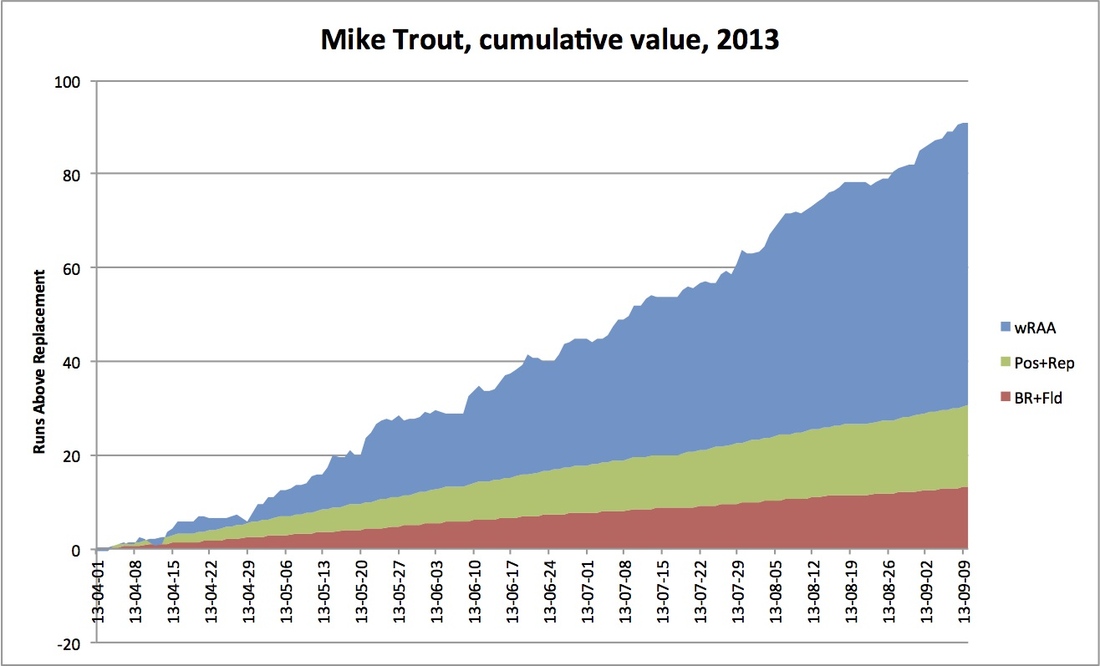 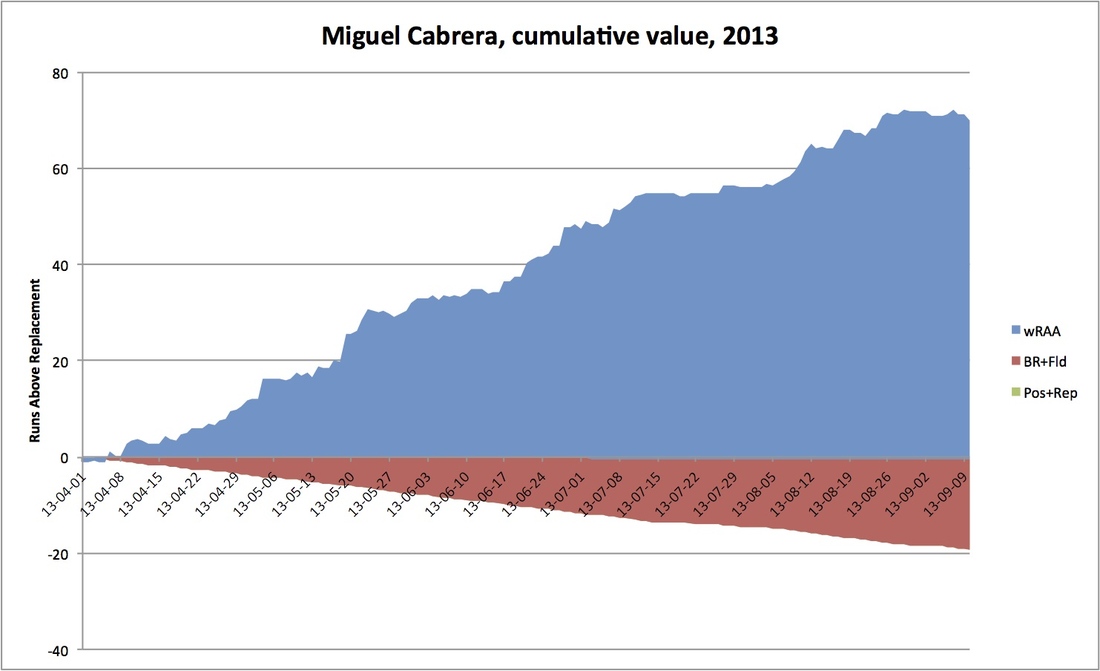 So of course, Miguel Cabrera has to be painfully unconventional and test my graphing ability. Yeah, the big red part? His negative for fielding and baserunning. That's no problem, but I have no idea how to show that the negative there is accounted for by the positional adjustment and replacement level (green, not shown) - basically, those two cancel each other out and Cabrera's overall value is basically his batting value. You can see a few hints of green if you squint, though. 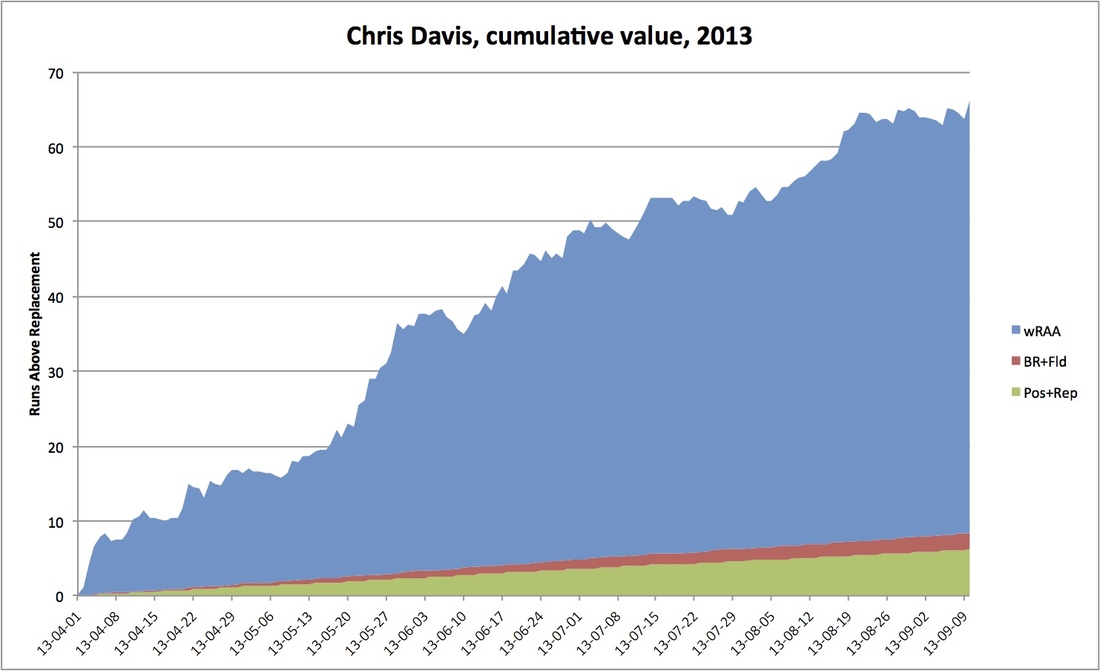 Gee, think Chris Davis has had a few hot streaks? That's a lot of blue and there are a couple of major spikes instead of slow, steady growth. 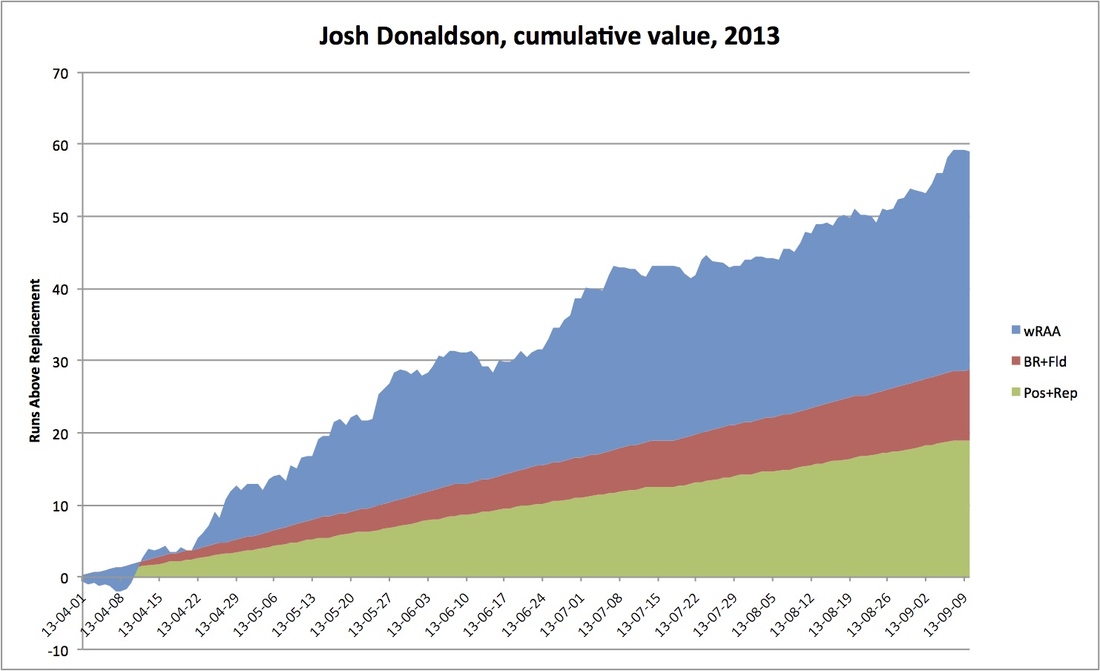 And finally, we add in Josh Donaldson for some contrast since more of his value comes from his position than the other three. I could have placed Evan Longoria or Manuel Machado in here just as easily, but Donaldson gets his second piece of MVP love for the day.

And now, how do they all look together? Well, it'd be an incredibly messy graph to put these four on top of each other, so instead we'll take the cumulative "value" (I hesitate to use RAR or WAR since it doesn't add up exactly) and just graph those lines against each other. 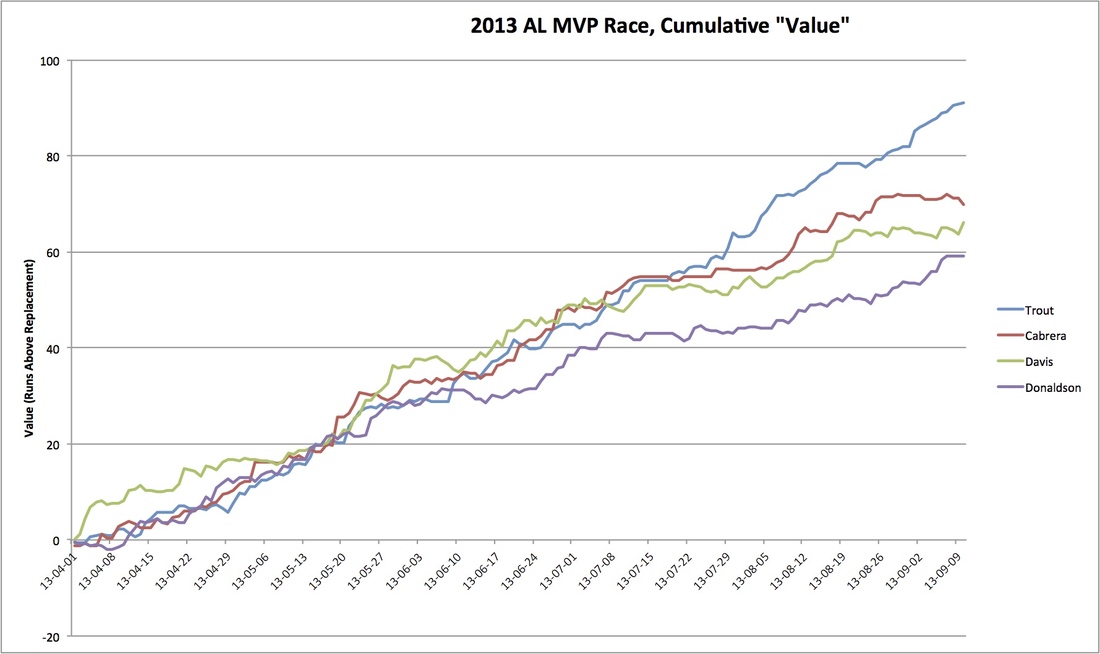 I think this backs up what the narrative has been. Donaldson, for example, has made a late push to close the gap, while Trout has undoubtedly been the second half MVP, really breaking away from the pack since mid-July.

So...thoughts? Ways to improve the method or the graphs for an end-of-season look? Should I log off Excel for a little while?