The year in errors

Share All sharing options for: The year in errors

It isn't surprising that errors get a lot of bad press. There's plenty of good reasons to mock the error, partly because it's an entirely subjective judgement that improperly clouds good defensive evaluation and partly because, by definition, it was a mistake, and mistakes are inherently negative. People often refer to baseball as an exercise in failure, and they're right. But for all of that talk about failure, we spend far more internet ink writing about success. This is a post dedicated to failure.

Specifically, we'll be walking through some numbers relating to errors in 2013 and identifying some of the most interesting. If you have a favorite that you don't see here, please include it in the comments. I've made liberal use of the Play Index at Baseball-Reference, if you're wondering where you can find such a treasure trove of glorious failure. The focus will be on the easily understood "Reached on Error" statistic, which identifies the plate appearances in which a batter reached base as a result of an error. Some have even suggested ROE be included into on-base percentage because they believe it to be a skill. I'll stay away from that debate and share with you a less partisan account.

First it's unsurprising that errors occur quite consistently throughout the year and don't vary a whole lot between home and road teams. If you divide the game into three inning chunks, errors seem relatively steady across individual contests, but when you map them onto innings, it gets a little crazy. My hypothesis would be that errors have an inverse relationship to strikeout rate, which tracks along with this pattern as the starter goes through the order and starts to tire. 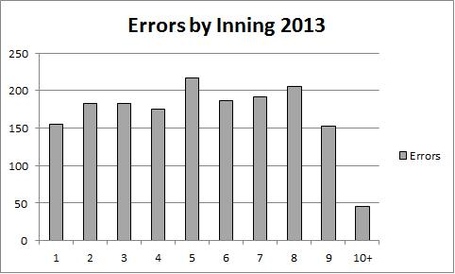 Even more interestingly, errors don't pop up equally across the number of outs. An error is much more likely with zero (617) or one out (648) than it is with two outs (429). It won't surprise you to learn that Wily Peralta (18) was the pitcher most victimized by errors if you read Bryan Grosnick's post last week about ERA, but it might surprise you to learn that his teammate, Nori Aoki (16), is the hitter who benefited the most from errors. Is there some sort of strange Miller Park effect? Not really, it ranks just 10th in the league in errors with Citizens Bank setting the pace.

Certainly, ground balls are responsible for the vast majority of errors (1534 of 1694) but would you believe 27 men reached base in 2013 on errors made while fielding what B-R calls a "pop fly?"

Four batters reached on errors during 3-0 counts, and six did so after working the count to 10 or more pitches. The collective RE24 of the lot was 872, and the unofficial fastest pitch thrown to a batter reaching on an error was an Aroldis Chapman fastball (102 mph) to Pedro Alvarez on July 20.

It was a big year for errors, probably. I'm not really sure what an objective measure of that would look like, but it seemed like there were a lot of them at inopportune/opportune times depending on your rooting interest. Errors are one of the least predictable aspects of baseball, yet they play so heavily into our consciousness. We have "E" displayed prominently in the box score, it carries fielding percentage, and even drives one of the most widely used pitching stats, ERA. It's a big part of the game, but rarely considered on its own. We know that ground balls to the left side of the infield generate errors more than anything else, but determining when those are going to happen is pretty much just guesswork.

There's an old joke about baseball players having their mistakes catalogued in the newspaper, which is both cruel and kind of fun. I think the idea of an error is appealing because they're only given on plays in which a fielder should have made the play with ordinary effort. Whenever a superior athlete makes an easily avoidable mistake like that, it's interesting. The joy of the error, which many of my colleagues think should be taken from the game, is that it comes completely out of nowhere. You see a ground ball hit to short and you breathe out knowing it's a routine play.

I'm sympathetic to the idea that we shouldn't use errors to evaluate defense or pitching, but I don't want to see them vanish. I'm not really sure what value they bring to the enterprise, but there is something about tracking the bone-headed mistakes of a world class athlete that is appealing, even if we aren't going to take them too seriously.

Neil Weinberg is a writer and editor at Beyond The Box Score, contributor to Gammons Daily, and can also be found writing enthusiastically about the Detroit Tigers at New English D. You can follow and interact with him on Twitter at @NeilWeinberg44.