There's almost no chance that the BBWAA will have made the right choices when the 2013 Hall of Fame class is announced January 9. So we decided to have our own vote.

Fresh off our stellar performance in voting for the 2012 end-of-season awards, we at the Beyond the Boxscore writers association of America (the BtBWAA, if you will) decided to take the 2013 Hall of Fame vote into our own hands. And so we did, recreating the BBWAA's Cooperstown exact balloting process but for our own pool of voters—but with two important differences.

First and most importantly we are publicly releasing every voter's ballot, just as I have badgered the BBWAA to do. The majority of real-life writers either willfully embrace their anonymity or just don't bother to mention how they voted for the greatest honor in all of baseball, and this privacy actually changes the outcome of the vote. So we did away with it.

Second, the ballots I sent to our esteemed group of writers had two sections. The first was identical to that the BBWAA used this year: 37 candidates, pick up to 10. The second part of the ballot dropped the 10-vote maximum, allowing each elector to pick as many players as he (all our voters were male) thought were deserving of immortality.

Thirteen voters comprised our electorate, meaning candidates needed 10 votes to make the Hall of Fame and one to stay on the ballot for 2014.

Without further ado, here are your 2013 BtBWAA Baseball Hall of Famers! Starting with the normal ballot: (click to embiggen) 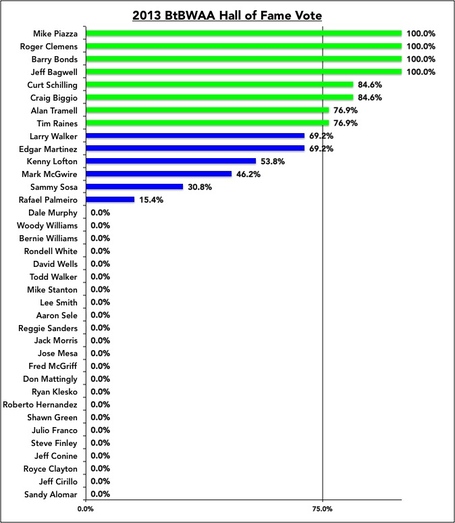 Eight candidates comprise our Cooperstown class: Unanimous picks Jeff Bagwell, Barry Bonds, Roger Clemens, and Mike Piazza are joined by Craig Biggio, Curt Schilling, Tim Raines, and Alan Trammell. Edgar Martinez and Larry Walker barely miss the 75-percent threshold, with Kenny Lofton, Mark McGwire, Sammy Sosa, and Rafael Palmeiro all getting support. (We inducted Bagwell, Martinez, Trammell, Raines, Walker, and Palmeiro last year, so I'm not sure why they were on the BBWAA's ballot anyway. Must have been a clerical error.) Everyone else falls off the 2014 ballot.

A few interesting notes from the voting:

Now on to the fun one. What happens when you let BtBWAA writers vote for as many Hall of Fame candidates as they want? (click to embiggen) 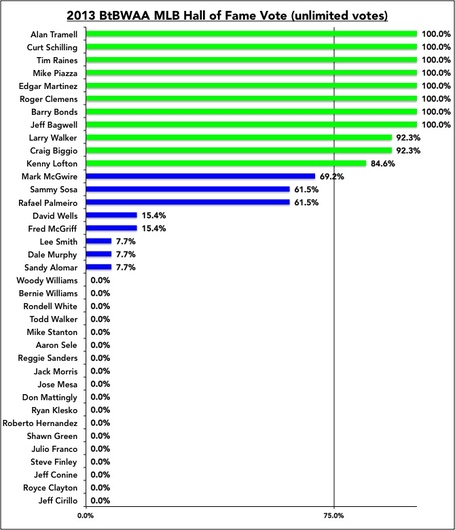 Some things to note here:

My initial ballot went: Bagwell, Bonds, Clemens, Lofton, Martinez, McGwire, Piazza, Schilling, Sosa, Walker, and I'm not proud of some of the names I had to leave off. Given the chance to pick as many players as I want I added Biggio, Palmeiro, McGriff, Raines, Smith, and Trammell to that list—and since I'm an Indians fan and I knew it wouldn't matter anyway I threw in a vote for Sandy Alomar.