On Monday, the Baseball Writers Association of America will release the results of its 2012 Hall of Fame vote. Given the history of BBWAA Cooperstown voting (both recently and not so recently) it's safe to say that the voters' decisions will be met with some frustration.

Rather than wait to see what the BBWAA does, we here at Beyond the Box Score decided to take matters into our own hands. Twelve members of our "BtBWAA" held a mock vote to see who would get into our version of Cooperstown.

As with the real vote, each writer was allowed up to 10 picks per ballot. A player must be named on 75 percent of ballots (in this case meaning nine votes) in order to be elected to the Hall of Fame. Any candidate who gets less than five percent support (in this case, anyone who was named on even one ballot would clear that) would be dropped for the 2013 vote.

Without further ado, here are our picks for who should join Ron Santo's (our Veterans Committee election winner) widow in Cooperstown in July:

Full results—in both text and graphic form—after the jump.

* denotes player who failed to reach 5%

Or, if you prefer your results in infographic form: 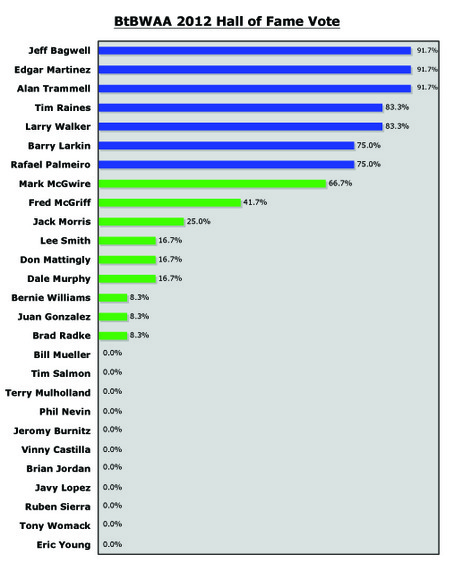 This looks nothing like what the BBWAA will do, nor does it bear much resemblance to the other mock vote in which I participated. But in my opinion, we did a fantastic job. Of all the award votes I've been a part of at BtB, I'm most proud of this one.

In a year that will likely set a new record for fewest votes per BBWAA ballot, we certainly weren't stingy with our votes. We averaged eight votes per ballot (last year, the BBWAA averaged less than six) and elected seven players: Bagwell, Martinez, Trammell, Raines, Walker, Larkin, and Palmeiro. As far as I can tell, this would be the biggest elected class in Cooperstown history.

Besides the fact that we elected seven people, the thing I found most interesting about the results is that we didn't pick anyone unanimously. Not even the best of the best get in with 100 percent in the real vote, but with only 12 writers participating—all of us at least share similar philosophies in how we approach the game, I'd say—I had expected at least one of Bagwell, Raines, or Martinez to get 12 yea votes.

Some other interesting things about the voting:

My ballot went as follows: Bagwell, Larkin, Martinez, McGriff, McGwire, Palmeiro, Raines, Smith, Trammell, Walker. If you're interested, you can find my reasoning for each of my picks here and explanations for why I snubbed each of the other candidates here.