There are no special qualifications voters in democratic societies need to go to the polls except for citizenship, and all a fan needs to cast his or her vote for the All-Star Game is internet access or a ticket to the ballpark. But not just anyone can decide who deserves to be immortalized in the hallowed halls of Cooperstown—only those who have been part of the selective Baseball Writers Association of America for 10 years are issued ballots. Voting for the Hall of Fame isn't a right, it's a privilege.

Given that suffrage is limited to writers with demonstrated expertise in (or at least experience) covering the game, it stands to reason that each participant would be responsible enough to think through his or her choices and vote only based on his or her rational convictions. Their opinions may be unpopular, but as some of the most knowledgeable baseball people on the planet they should at least be capable of defending their choices.

In the run-up to the announcement of the results, at least two people undertook the task of compiling exit polls based on publicly released ballots. These counts may be intended to estimate how the vote will turn out ahead of schedule, but they also make it possible to compare public ballots with private ones. In doing so, we find some evidence of a disturbing trend: those who revealed or explained their picks voted differently—and, I would say, better—than those who maintained their anonymity.

Using the 112 ballots collected here (Repoz' list has a larger sample size, but this one lists and links to each ballot it collects) and the BBWAA's official vote tallies, I calculated how many votes each candidate got from voters who have remained anonymous and how his support differed between public and private ballots.

Ideally, the numbers would be equal. If every writer voted rationally and felt confident in his or her picks, the disparity would theoretically be nil. But just like last year, that wasn't the case.

Here's how each of the serious candidates (i.e., those who got more than six votes) fared on public and private ballots: 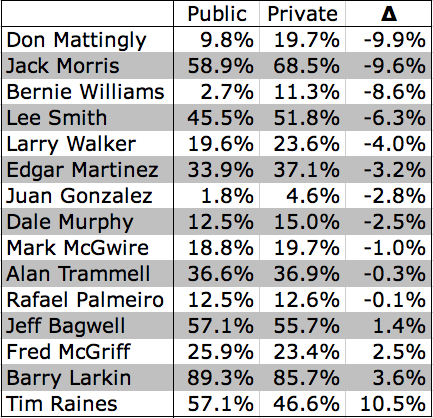 Some of the results are pretty similar. Rafael Palmeiro and Alan Trammell's numbers are off by a fraction of a percent, and Mark McGwire, Jeff Bagwell, and Fred McGriff's discrepancies are small enough to ignore. And ultimately both groups elected Barry Larkin (and only Larkin) to Cooperstown.

But the other candidates? Not so much. Check out the guys on top. Don Mattingly and Jack Morris were clearly evaluated more cynically by those who released their ballots than by those who didn't. Same goes for Bernie Williams and Lee Smith. And, down at the bottom, you'll find the man with the biggest discrepancy on the ballot: Tim Raines. Compared to public ballots, he lost more than a vote for every 10 anonymous writers.

It's not just that the secret ballots were different: it's that they were worse. The differences between the serious candidates' public and private ballot numbers had a .592 correlation with wins above replacement (Baseball-Reference's version), and a .530 correlation with Adam Darowski's wWAR. It's not just a question of stats, either: the vote discrepancies and the results of our BtBWAA mock Cooperstown vote had a correlation of .615. And while the candidates who got more votes from public ballots averaged 73 percent in our election, the players more favored by private voters averaged just 46 percent from us.

In other words, there is a connection between how deserving a player is of Cooperstown and how differently he will be supported by public and private voters. This isn't to say that none of the anonymous-preferred candidates were worthy, but in general both the numbers and our voters agree that the players towards the bottom of the list above are better than those on top.

It's clear from these numbers that anonymous voters fill out their ballots differently than those who make their choices public, and the secretive writers are making worse choices. Part of the problem, as WilsonC noted last year, might be that sabermetrically inclined voters are just more likely to find outlets to explain their picks than writers who work more with traditional stats. But I don't think that explains the extent of the discrepancy.

At least a few voters are probably using the cover of anonymity to avoid having their readers hold them accountable for their votes. Maybe it's because they're embarrassed about their ballot, or worried that it would be unpopular. Maybe it's because they know they can't defend their selections. I'm not sure. But some writers do not want their names to be associated with their picks—voting for Mattingly and Morris, or snubbing Raines—and that's a problem.

Let me be clear: I'm certainly not suggesting that every member of the BBWAA who chose not to reveal his or her ballot had sinister motives. Most of them probably just never got around to it, or no longer have an easy outlet for doing so. I know some voters whose ballots I haven't seen publicized, and they're certainly not the kind of people who would cast their ballots irresponsibly. But looking at these numbers, it seems at least a handful of voters are taking unfair advantage of their anonymity.

Here's the thing: these aren't laypeople or couch potato fans who are voting. They're the biggest names in sportswriting. They see the players. They watch the games. They know the ins and outs of baseball. They're the informers and the opinion-makers, and they all have extensive experience analyzing and arguing about the game. So every single one of them should be be fully capable of defending each selection and snub on his or her ballot. Period.

Remember the part about voting for the Hall of Fame being a privilege and not a right? The idea that anyone who has the honor of guarding the gates of Cooperstown wouldn't take his or her ballot seriously enough to vote rationally and make choices they can confidently defend is sheer lunacy. I don't care if it's two people or 200. It's a problem. And it needs to stop.

And so, the BBWAA must end its secret ballot system. Instead of leaving the option of revealing their votes to the writers, put each ballot up as a PDF. Or do it as a spreadsheet, like this. Just give us some way to hold the individual voters accountable for the choices they make.

Yes, there's a reason for keeping ballots secret: it shields voters from external pressures, or the possible repercussions of unpopular choices. But again, it's not just anyone who gets to vote, so that protection isn't necessary. The average citizen at the polls doesn't have to reveal which Congressional candidate he voted for, but how Congressmen vote on legislation is public record. Their decisions are public not just because they are accountable to their constituents, but because they are (presumably) knowledgeable on the subject and have well-thought out opinions. The same should hold true for sportswriters and the Hall of Fame.

I'm not saying my ballot was objectively correct. I don't care if you vote for Morris or Mattingly. Heck, put a check next to Tony Womack or Phil Nevin if you really want to. All I ask is that the writers think through their choices enough that they could defend their picks, or at least have their names on them without embarrassment. If you make a living writing about baseball and you can't put together cohesive arguments about the players you picked, you voted wrong.

The Hall of Fame is the most sacred place in baseball, and it means a great deal both to players it enshrines and the awed visitors who make the pilgrimage to Cooperstown. Any writer who abused his or her anonymity has abdicated his or her responsibilities and done a disservice to the game and all its fans. It shouldn't happen again.