A Graphic Look at Who's Hitting April

Share All sharing options for: A Graphic Look at Who's Hitting April 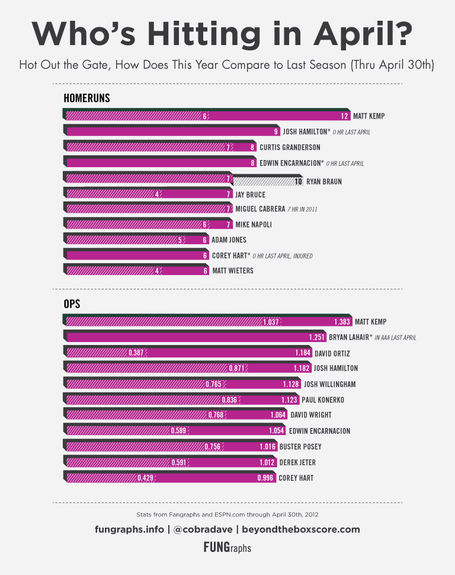 As a follow-up to last week's early season team starts, since it's now the first of May, we take a look at individual hot starts and how they compared to last year? The Nationals were voted by our readers to be the most likely to remain hot. Do some of these players start hot, or do you think this is sustainable? Aside from focussing on just Matt Kemp and how he's going beast mode on the NL, what unlikely names are surprising to see on this list?

I wanted to use OPS+ or wOBA, but I couldn't isolate March/April numbers when I was looking, so hopefully this will tell part of the story still.

Cliff Corocoran from SI.com covered Matt Kemp's tear yesterday, so I can lay off that a little bit. Rob Neyer has an awesome piece today regarding good and bad players per position as well. Here are some notables to keep an eye on.

Matt Kemp:
Has more HR than the Cubs and Padres combined. He doubled his HR total from last year, and even last year, while holding an OPS of 1.037, this year's OPS of 1.382 is amazing.

Edwin Encarnacion
Making a run for the title of "The Next Next Jose Bautista", Encarnacion belted 3 HR over the weekend and 1 last nite to total 8 for the month. His OPS is a Bautista-like 1.054. Eric Karabell, in his Insider article today, thinks he can finish with 30 HR.

Matt Wieters
His hitting is catching up to his defense. 2 HR more than last April (6 HR) his OPS is a respectable 0.937. After the all-star break, he has 14 HR last season.

Bryan LaHair
Hardball Talk has an article about his surge today. It's exciting to see a career minor leaguer get his chance. His OPS 1.251 will likely fall, but last season in AAA, he clubbed 38 HR and had an OPS of 1.070 over 129 games.

David Ortiz
Dare I ask how he's still doing this? Last year he started off with a 0.768 OPS, this year, 1.184. Marc Normadin writes about his different type of April.

Buster Posey
Coming off of injury, it's good to see Posey coming back with a team-leading 1.016 OPS in April. His hot start is getting AP articles written about him.