The Players Who Have Hit 5th Most Often Since 1919

Share All sharing options for: The Players Who Have Hit 5th Most Often Since 1919

Last week, I delved into the history of the 6th spot in the batting order, finding the players who had hit there the most often in their careers. This week, I give the 5th spot the same treatment.

I used Baseball-Reference's Play Index to find the players who have had the most starts hitting 5th (appearances as a substitute don't count). The numbers only go back to 1919. I also found the players who started the highest percentage of games in the 5th spot (with minimum of 400 starts there). 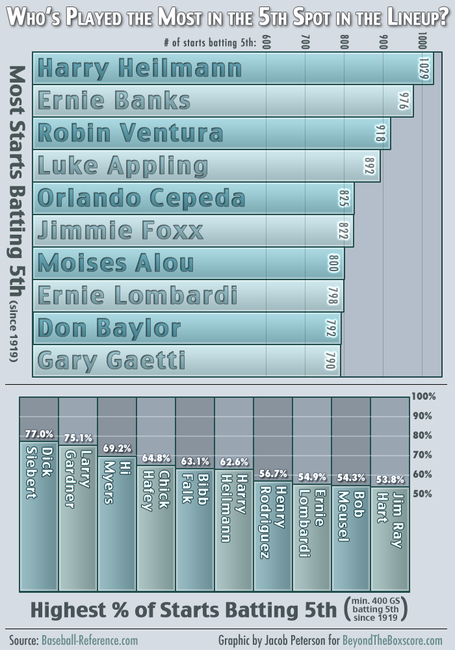 It's interesting to compare this graphic to the one for 6th hitters. For one thing, the hitters with the most starts hitting 5th are, by and large, better than the ones hitting 6th. This is not surprising, since with all else being equal, most managers will put the better hitter 5th rather than 6th. Still, it's nice to see some evidence to back up that idea.

What this tells me is that managers throughout history have had more of a consensus about what a typical 5th-place hitter is like, relative to 6th-place hitters, anyway. Based on the quick research I did for last week's post, I'd say that the 5th spot is still less well-defined than the first 4 spots in the batting order, but it is more well-defined than the 6th or 7th spots (and perhaps about equal to the 8th spot).

The fact that B-Ref's box score database only goes back to 1919 affects several of the players on the list, most notably the #1 player on the most-time-hitting-5th list, legendary Tigers outfielder Harry Heilmann. Heilmann played the equivalent of about 3 full seasons before 1919, so if those years were included, his lead over 2nd place would likely be even larger. Including those seasons very well could lower his percentage, however.

While none of the other players near the top of the totals list were impacted by the 1919 cutoff, several players who made the percentage list were likely aided by that restriction. In addition to Heilmann, 2nd-place Larry Gardner and 3rd-place Hi Myers played a significant fraction of their careers before 1919. The chances are good that, if their whole careers were included, Gardner and Myers would rank at least a bit lower on the list.

Interestingly, while the totals leaderboard is a nice mix of older players and more recent ones, the percentage leaders are nearly all old-timers (the one exception is Henry Rodriguez). Perhaps this indicates that modern managers are slightly less locked-in to the concept of a "5th-place hitter"?

While several relatively recent retirees like Moises Alou, Robin Ventura, and John Olerud are near the top of the totals list, the active leader in most games hitting 5th has a long way to go to break into the top 20 overall. That active leader* is Torii Hunter, who has 579 starts in the 5th spot, which is just 50th-most all-time. After Hunter comes Jim Thome (545 starts hitting 5th) and Mike Lowell (543).

The active leader on a percentage basis is Hideki Matsui, who has hit 5th in 511 of his 1148 career starts to this point (44.5%). This makes sense, since Matsui has spent the majority of his MLB career in his peak-to-early-decline phase, which is when I'd guess that a slugger is most likely to hit 5th. If he had started his career in America, Matsui likely wouldn't have quite so high of a percentage; similarly, as his career winds down here, his percentage is likely to drop, since he'll probably bet hitting lower in the order. Matsui has a large lead over 2nd-place Mike Lowell, who comes in at 35.8%.

Now that I've looked at both the most 5th-place and the most 6th-place hitters, I can see who ranks highly on both lists. The undoubted champion is Gary Gaetti, who has the 10th-most starts in the 5th spot and the 11th-most starts in the 6th spot. Nobody else ranks in the top 20 on both lists. Gaetti makes both lists almost entirely due to his longevity, however; he hit 5th or 6th 1412 times, which is "only" 60% of his career starts. He also hit cleanup 444 times and 7th 301 times.

The player with the highest percentage of starts in either the 5th or the 6th spots is likely Larry Gardner, who has 441 starts hitting 5th and 76 starts hitting 6th, out of 587 total starts. That's a whopping 88% at either 5th or 6th. Though as I mentioned above, this is actually less than half of Gardner's career, which started in 1908. Among the players to start their careers in 1919 or later, I believe Bibb Falk has the highest percentage, 84%. Falk hit 5th 746 times and hit 6th 251 times, for a total of 997 starts. That's out of a total of 1183 starts.

I'll check out the 7th spot in the batting order next week. Thanks for reading.