The Players Who Have Hit 6th Most Often Since 1919

Share All sharing options for: The Players Who Have Hit 6th Most Often Since 1919

Earlier this week on Twitter, the always-entertaining Jon Bois of SB Nation solicited suggestions for the most "batting 6th" player. As is always the case with Bois' "most ____" exercises, his criteria are purposefully not well-defined... In fact, they seem entirely idiosyncratic, which is part of the fun. Bois eventually landed on Joe Crede as the most "batting 6th" player.

I don't wish to dispute Bois' results. Far from it. Crede feels like a very "batting 6th" kind of guy, regardless of where he actually hit. You know, moderate power, moderate batting average, moderate walk rate. That's what I think of when I think of a player hitting 6th, and those are all qualities that Crede possessed in spades.

Nonetheless, the process got me to thinking about which players have batted 6th the most times, and the highest percentage of times, in their careers. Being me, I had to do the research. So off I went to Baseball-Reference's Play Index, where I could search game logs dating back to 1919. Here's what I found: 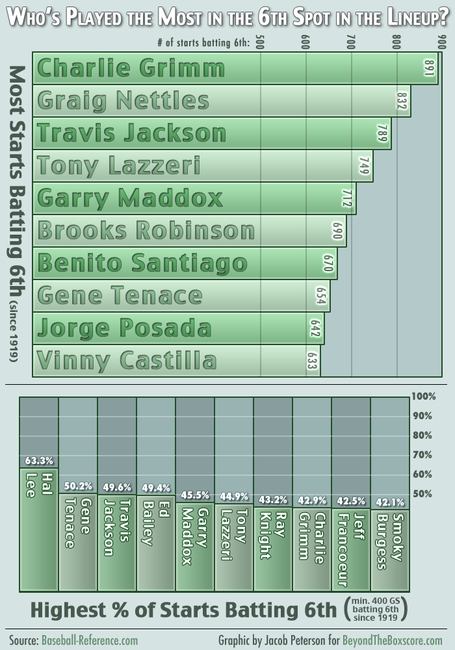 What does this mean? Other than the fact that it seems like catchers are unusually likely to bat 6th*, I'm not sure. But it's fun to think about.

* At least 15 of the top 50 players in terms of number of starts batting 6th are catchers (and a couple others played there for part of their careers). That includes the players listed above--Gene Tenace, Jorge Posada, Benito Santiago, and Ray Knight, and Smoky Burgess--as well as Ivan Rodriguez, Gary Carter (hang in there, Kid!), and Carlton Fisk.

To put these numbers in perspective, Charlie Grimm's record 891 games batting 6th amounts to 5.8 full seasons (at 154 games per season). Graig Nettles' 832 games works out to 5.1 full seasons at 162 games per year. Those two and Travis Jackson are the only 3 players to manage at least 5 seasons in the 6th spot.

Heck, even in the 8th spot, Brad Ausmus hit there 996 times (6.1 seasons). Based on some quick research, it looks like only the 7th spot is less defined than the 6th spot (5th is about the same as 6th from what I can tell).

Only two players in MLB history (since 1919) have batted 6th at least 400 times and in more than half of their starts, and one of those was just barely there. Hal Lee demolished the field, with 443 starts in the 6th spot out of 700 career starts. Gene Tenace was a distant 2nd, with 654 times hitting 6th out of 1302 starts.

With Jorge Posada now retired, the active leader in most games hitting 6th is another backstop, Ivan Rodriguez, with 587. After Pudge, it's Derrek Lee and Mike Cameron, both with 489.

The active leader in percentage of starts hitting 6th is Jeff Francoeur at 42.5%. He's far, far ahead of anyone else. Cameron is at 27.0% and Lee is at 26.8%. If you lower the threshold to 300 times hitting 6th, then Eric Hinske would be 2nd with 34.8% of his starts in the 6th spot. You have to lower the minimum to 269 starts in the 6th spot to get someone with a higher percentage than Francoeur: Wes Helms, at 44.2%.

In other words, hardly any active veteran players have hit in the 6th spot even a plurality of the time. That 5-6-7 part of the batting order has always been the most fluid, but it may have become even more fluid in recent years.

As a footnote, Joe Crede didn't hit 6th particularly often. Just 166 times out of 857 career starts (19.4%). He actually hit 7th and 8th more often than 6th. Since he generally played on good offensive teams, though, I wouldn't hold that against him. Take away a Konerko or a Magglio and I bet Crede would have a lot more starts in the 6th spot. Not that the numbers matter, really. As I said at the top of the post, the most "batting 6th" player isn't necessarily the one who hit there the most. It's more about who feels right.

By the way, if you're interested in players who hit 6th a lot, try out my Sporcle quiz.