Share All sharing options for: Exploring Chase and Watch Rates

One aspect of pitching analysis I enjoy is looking at three simple metrics - really two.  One is the ball to called strike ratio (B:CS).  It's useful in a few ways - but, at a glance, a poor ratio on a fastball (for example, 2.5:1) it makes me wonder if he's wild (i.e. missing high) or tentative (missing wide).   Again, this is just one element or aspect of a pitcher (or, more commonly, a hitter).

When I add in two versions of swing rate, I get a picture of control and deception.  If a breaking pitch is chased out of the zone AND watched in the zone, I figure the pitcher must have control and some form of deception - whether it be keeping the hitter off balance or nasty stuff.  I usually don't consider these too much when looking at pitchers as a whole, however.  Just within pitch types, maybe counts etc.

But, I decided to give it a whirl, fired up all pitchers in 2008 with more than 500 pitches PA in the PITCHf/x database.

As a broad statement, batters swing at a third of all pitches out of the rule book zone, and also take a third of those within the zone.  These reference points are the same across the 2008 and 2007 samples, or roughly so.

I use Watch, the inverse of a simple swing rate in the zone since (a) it lines up nicely with the Chase value and (b) the convenient proximity to what also would be a good batting average - easy to digest.

A couple things stand out - the pitchers that fall in the upper levels of all three metrics are good pitchers, the pitchers at the bottom aren't as bad as those at the top are good, however.  Lastly, it seems chase rate is more meaningful, although, in combination with other metrics, watch rates can still be helpful.  I won't exhaustively explain all this, but I think/hope a quick run through some numbers will make that clear enough.

Those cut-offs are fairly arbitrary, and I'll throw in tRA+ from StatCorner for a reference.

No real dogs, the worst are just below average.  A few top shelf starters and relievers are in there, too.

Now, on the flip side of the equation, the wild and un-deceptive.

13 pitchers made this cut.

So, what does correspond with success, in a broad sense?  I think we all know the results of a bad B:CS ratio.  But what's more important - chasing or watching?

Intuitively, I'd say chasing.  It leads to higher whiff rates and less hard hit balls.  The penalty for relying on too many chases is too many walks - so watch the B:CS ratio that's inflated when a pitcher has a low chase rate (that's just an idea, nothing I've proven out).   The penalty for relying on too many watches is getting crushed every so often - so watch the nkSLG and TBP (also just another idea).

Here's a run around the distribution - 9 "extremes", and, in the center square, Mr. Average. 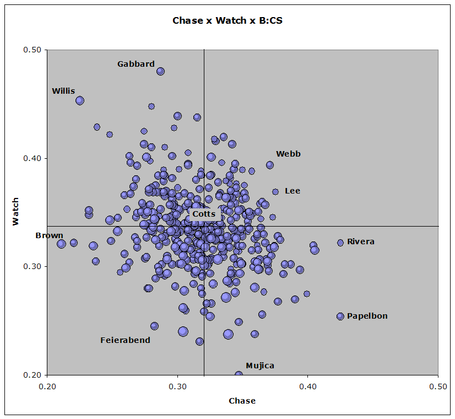 Notice the high chase guys picked out in their quadrants are Brandon Webb, Cliff Lee, Mariano Rivera and Jonathon Papelbon.

If you want to see the whole list of 425 pitchers and their numbers (no tRA+, feel free to add it), you can grab/view this Google doc.  I'll go back to Mom's BasementTM, where my lab is obviously located, and explore the notions around chase/slg and watch/b:cs.