The Minnesota Twins first baseman and St. Louis Cardinals third baseman are alike in more ways than one.

At first glance, it might not appear that Joe Mauer and Matt Carpenter have all that much in common. Mauer was drafted No. 1 overall back in 2001 out of Cretin High School in St. Paul. Carpenter was a 13th round from TCU in 2009. As the first overall pick, Mauer commanded a hefty signing bonus of 5.15 million. On the other hand, Carpenter signed for $1,000 as a 5th year senior.

While they come from very different baseball backgrounds, Mauer and Carpenter have very similar hitting styles. Clearly, Mauer has the superior track record. The Minnesota Twins catcher and now first baseman owns a career batting line of .319/.401/.461 over the course of 11 seasons. Among active players with at least 2000 plate appearances (sorry Mike Trout) only Joey Votto, Albert Pujols and Miguel Cabrera have a higher career OBP.

Though Carpenter has only a little more than 25 percent of the plate appearances that Mauer has accumulated, his .299/.379/.445 line is eerily similar. When you consider that Carpenter has played in a more difficult offensive era, you see that he has a 133 wRC+, which matches up nicely with Mauer's 132 mark. The two combine a low strikeout rate with a high walk rate. Mauer owns walk and strikeout rates of 12.0 percent and 11.5 percent, respectively, while Carpenter sits at 10.7 percent and 15.5 percent. 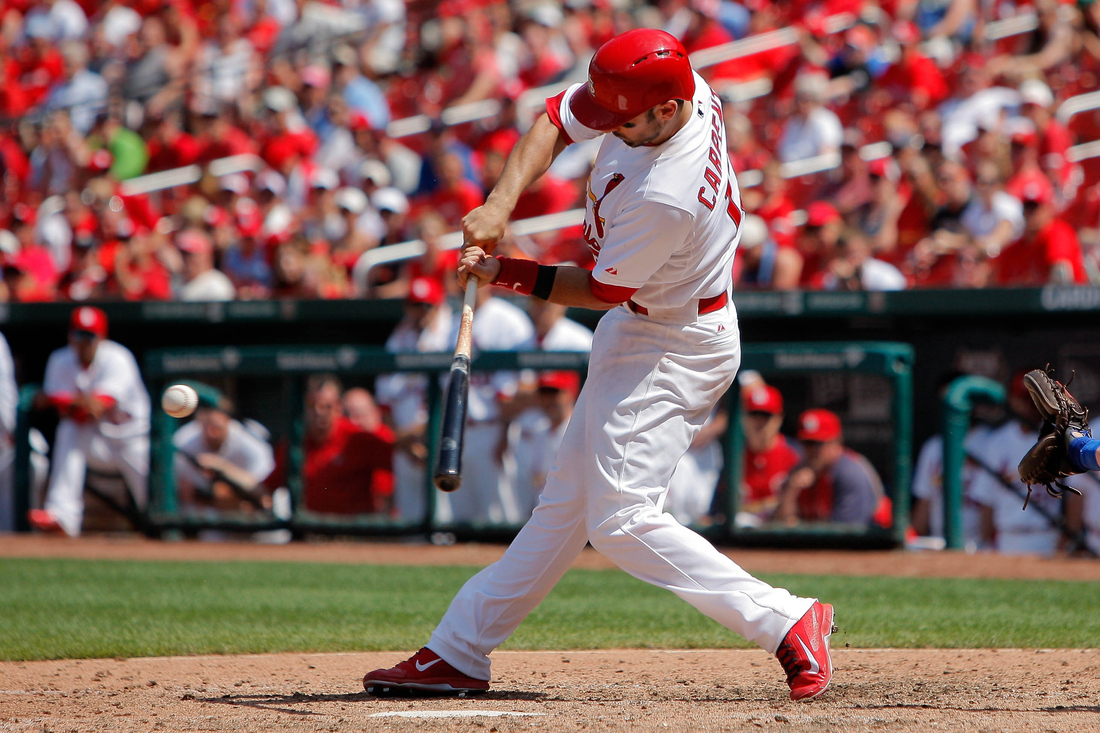 Despite the fact that they are large men that currently man corner infield spots, neither Mauer nor Carpenter hit for very much power. Listed at 6'5 and 230 pounds, Mauer has a career .142 ISO and except for his 2009 campaign when he slugged 28 home runs and posted a .222 ISO, he's never been above .159. Carpenter, who was a college first baseman who now plays second and third base, checks in at 6'3 and 215 pounds. His career ISO is .147, thanks to a high rate of doubles. In 353 career games he's left the yard just 20 times.

Mauer and Carpenter make their hay by producing a high rate of hits on balls in play. Carpenter has a career in-play batting average of .345, which is essentially the same as Mauer's .347 mark. Their line drives rates are both above the major league average, and they rarely hit infield fly balls. Both of them average just two infield fly balls per year.

Furthermore, they spray the ball around, using the whole field. Here's a table showing their batted ball distribution and their production on balls hit to the pull side, up the middle and the opposite field.

Mauer uses the opposite field more frequently, and with much greater effectiveness. Carpenter pulls the ball more often and has a significant edge when doing so. That's less of a similarity than I initially thought.

Overall, Mauer and Carpenter have very similar hitting styles. Their type of skillset is very unusual in today's game where contact has gone by the wayside in favor of power. Though Carpenter has had the better season to this point, they have very similar projections going forward. Steamer sees a .281/.367/.411 line with a 123 wRC+ for Carpenter and a .291/.375/.418 line with a 122 wRC+ for Mauer. ZiPS has a slightly lower projection for the two, and it gives a slight edge to Carpenter.

Stats courtesy of Fangraphs and Baseball-Reference

Chris Moran is a former college baseball player and current law student at Washington University in St. Louis. He's also an assistant baseball coach at Wash U. In addition to Beyond The Box Score, he contributes at Prospect Insider and Gammons Daily. He went to his first baseball game at age two. Follow him on Twitter @hangingslurves