The most valuable catchers in baseball

The first of a series evaluating players by position using a method I developed last year.

Share All sharing options for: The most valuable catchers in baseball

In my former blog I stumbled across a method with which to evaluate players using a feature from FanGraphs, looking for the best value. In the strict economic sense, value is satisfaction divided by cost; while cost is fixed, satisfaction is subjective. Baseball is similar -- salaries are fixed, but value can be subjective.

FanGraphs has a Value tab that includes a dollar estimate of the value a player has delivered, based on his FanGraphs Wins Above Replacement (fWAR) value. This value is roughly $5.2 million per fWAR point for 2014 and, when plotted against a player's salary, allows us to see if players are living up to their contract. This chart shows it for all catchers with at least 100 plate appearances (not necessarily at catcher) so far this year: 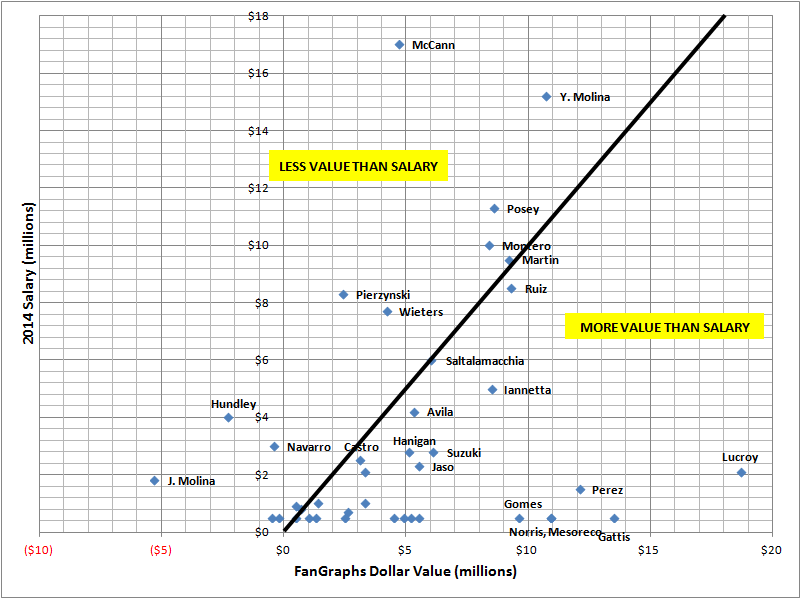 Since this is the first in this series, I'll describe the methodology. The FanGraphs data can be seen here, and the salary data is from this Deadspin article. A spreadsheet containing all the data for these catchers can be viewed here and will be updated as the different positions are discussed.

The diagonal line separates the chaff from the wheat. Players above the line are delivering less value than their salary and players below the line are delivering more value than their salary. Almost by definition, and certainly when comparing a full year's salary to half a year of production, salary will outpace production, especially with the higher salaries. Remember, it's not the numbers as much as the relative position to the other catchers. The diagonal line provides an easy manner to separate the good from the bad.

White Sox Tyler Flowers is one of the unlabeled points just below Jason Castro and deserves some mention -- I like to call this A Tale of Two (parts of) Seasons:

This was adapted from data at Baseball-Reference.com and shows the Jekyll and Hyde nature of Flowers' season to date. Unfortunately, his true value is probably closer to the second line than the first. His position on the good part of the chart is in danger day by day.

Nick Hundley is on his second team this year and has a $5 million option for 2015, an option I suspect the Orioles will opt out of. Brian McCann will forever be my hero for this alone:

In my opinion this is the second-best baseball video of 2013 (this one is #1 and always will be) and alone makes him worth $17 million. By the end of the year he'll have delivered around $10-12 million in value, and that's not bad. Same with A.J. Pierzynski, who has clearly entered the vagabond stage of his career. He can still manage a pitching staff and produce enough at 37 to justify his pay, which is saying something for someone who is still primarily a catcher at his age.

Matt Wieters is out for the rest of the year, which is a shame since he was hitting for average as well as power prior to his injury. Whether he would have maintained his production is an open question, and whether he'll still be a catcher when he returns is valid as well. He won't have an easy position to move to with Chris Davis, Manny Machado, Nelson Cruz and Nick Markakis on the team.

Salvador Perez is the best defensive catcher so far this year according to FanGraphs and one of the best values. He's showing enough power in a Royals lineup starved for it, but needs to take more walks. He's someone the Royals can build around for years to come since he's under team control through 2016 with three option years after that. Clearly the Braves thought enough of Evan Gattis to let McCann walk in free agency, and the player who last year was constantly looking for a position seems to have settled in as catcher quite well. Derek Norris and Devin Mesoraco, it's just too soon to tell -- they're both doing very well for now.

This method identifies the best catcher as the one furthest from the line, which in this case is Jonathan Lucroy. Fellow BtBS writer Chris Moran discussed him in this post a couple weeks ago, and he's one of the many reasons the Brewers are having the success they are. He's been a doubles machine, and the potential for a regression exists with a batting average of balls in play of .350, but even if he does, he'll regress and remain among the best catchers in baseball.

At some point Yadier Molina will begin to fade, and current projections place that sometime around 2025. The Cardinals certainly hope he continues to produce, since he's owed $43 million through 2017 with a team option for 2018. Buster Posey is making the transition to first, partly because Brandon Belt is out and partly because it's time. He's a little young at 27 to be making that move, but I suspect the collision in 2011 didn't do him any favors.

Miguel Montero, Carlos Ruiz and Russell Martin are all solid catchers at various points on the continuum. Montero looked like he was going to break out after 2012, regressed significantly in 2013, but appears to have rebounded for a miserable Diamondbacks team who will give the Cubs competition as this year's worst team. Ruiz and Martin are both on the wrong side of 30 -- Martin is hitting for average this year after not ever really doing so before, and the power Ruiz showed in 2012 appears to have been a fluke.

Catcher is the trickiest position on the field, and consequently the most difficult to truly place a value on. I mean, which is most important: defense, pitcher handling, throwing out base stealers, offense, or something else? They all fall into the mix, but all are not accorded equal value. As baseball enters a period in which it appears pitching will again dominate over hitting, the pitcher handling will take on greater importance as younger arms throwing more heat become the norm. Whether this will translate into higher catcher salaries isn't for me to say. In the next post, which will cover first basemen, the disparities between salary and value will become very stark. Stay tuned.