Edwin Encarnacion: Power, without the strikeouts

Power hitters often pair their long-ball tendencies with a pile of strikeouts. But Edwin Encarnacion is something altogether unique in today's game—a power hitter who rarely strikes out.

Share All sharing options for: Edwin Encarnacion: Power, without the strikeouts

Any baseball fan who watched the Toronto Blue Jays in 2013 likely remembers mostly heartbreak and disappointment. The Jays, after all, had very little go right for them en route to a last-place finish in the AL East.

Lost amid the team’s struggles, however, was the tremendous season that Edwin Encarnacion had at the plate. For the second straight year, Toronto’s first baseman/designated hitter was one of the American League’s best hitters, posting a 145 wRC+ and a .272/.370/.534 line in 621 plate appearances. Most impressive, at least in my mind, was the 10.0% strikeout rate that Encarnacion maintained throughout the season. That’s an excellent mark for just about anyone, never mind a player who hit 36 home runs.

In fact, a closer look at 2013’s leaders in strikeout rate reveals that Encarnacion finished with the eight-lowest strikeout percentage in baseball. Considering that conventional wisdom labels power hitters as burly sluggers with (at times extreme) contact issues, Encarnacion seemed to me as something of an outlier. Indeed the strikeout rate leaderboard among hitters from last season is littered with players who are almost polar opposites of Encarnacion. After all, guys like Alberto Callaspo, Erick Aybar, and Alexei Ramirez aren’t exactly known for their abilities to hit baseballs a long way, rather relying on superior contact ability and a far less fly-ball oriented approach.

All of which got me thinking about how rare a player with Encarnacion’s current skillset truly is. Using Baseball Reference’s Play Index, then, I simply searched for all hitters dating back to 2003 who finished the season with a slugging percentage greater than .500 and a strikeout rate lower than 10%.

The results weren’t exactly surprising, but they did reveal a few interesting takeaways:

First: ALBERT PUJOLS! With how the last two seasons have gone, it’s easy to forget just how great—and peerless—Pujols was for much of his time in St. Louis. Of the 25 seasons in which hitters have slugged over .500 and struck out less than 10% of the time since 2003, Pujols was responsible for eight of them.

For the most part, the rest of the players all seem like they should belong. Hitters like Barry Bonds, Vladimir Guerrero, and Gary Sheffield always paired big-time power with strong contact skills. It was shocking, though, to see Joe Crede’s name on the list, while guys like Sean Casey and Brian Giles also surprised me a bit. Yadier Molina nearly appeared on this list again following his 2013 campaign, but fell just short in both strikeout percentage (10.2%) and slugging (.477).

And the hitter who finished a season with the lowest strikeout rate on this list? It ended up being a tie between Nomar in 2006 and Sean Casey, who both finished with a Scutaro-esque 5.7% strikeout rate during their respective seasons.

So what does this tell us about Encarnacion? The 31-year-old has been a pretty darn good hitter the past two years, pairing power and contact ability in a way we don’t often see in the majors. He has been able to maintain his plus power, moreover, while greatly improving his plate discipline in recent seasons. Just four years ago, in 2009, Encarnacion posted a 19.8% strikeout percentage, a mark he has methodically cut in half during the time span since: 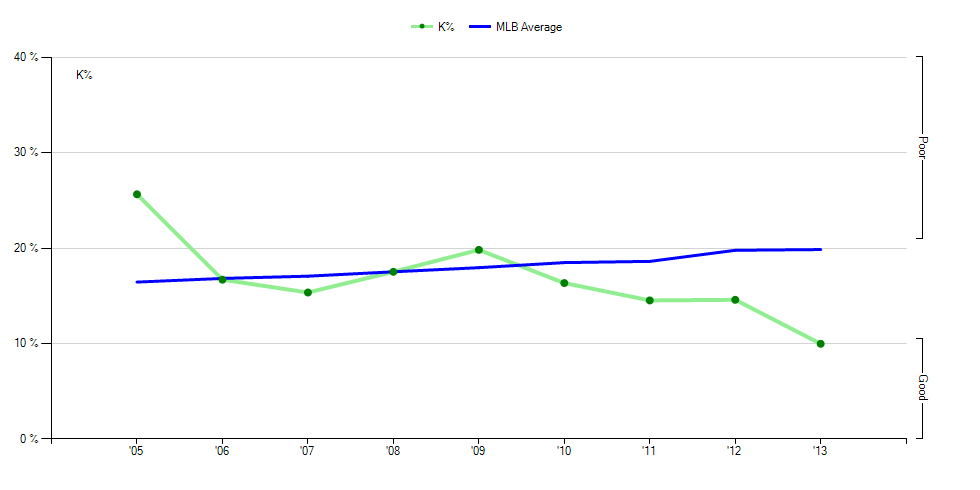 Throughout his time in Toronto, Encarnacion’s swing percentage has decreased each year, while his contact rate has increased, culminating in what was a career-low 6.3% swinging-strike rate in 2013. Simply put, Encarnacion was able to fine-tune his pitch recognition skills and patience enough to drastically improve his approach at the plate.

It doesn’t happen for most hitters who arrive in the majors with plus power but little patience (Wily Mo Pena’s now playing in Japan, after all). Nevertheless, through some discernable adjustments and likely great coaching in Toronto, Encarnacion has become one of the better power hitters in the game—hitting home runs and making contact in ways not dissimilar to Albert Pujols in his prime.

Alex Skillin is a writer and editor at Beyond the Box Score and also works as a Web Editor for SoxProspects.com. He writes, mostly about baseball and basketball, at a few other places across the Internet. You can follow him on Twitter at @AlexSkillin.