Ground ball rates are increasing and fly ball rates are decreasing. The distribution is changing as well, so does that reflect a league-wide preference?

Share All sharing options for: Batted ball rates are changing

Continuing along the theme of my previous post on the changes in the distribution of walk rates and strikeout rates for starting pitchers, I applied the same method of analysis to ground ball and fly ball rates. Pitchers have some degree of control over which batted ball they favor, which means that the batted ball distribution at least partially reflects pitcher skill.

Note: Line drive rates do not correlate well year-to-year, which suggests that the line drive rate is not a skill.

In order to obtain a sample, I grabbed data for only starting pitchers from FanGraphs going back to 2002, which is as far back as batted ball data goes. I took only raw ground ball, fly ball, and line drive numbers. In order to calculate rates, I defined a ball in play as any one of those three types. This definition is not 100% accurate, but any trends in the data should be unaffected. For example, the ground ball rate was calculated by this formula: GB/(GB+FB+LD). In order to make sure the sample was reliable, I excluded pitchers who didn't have at least 70 balls in play, which research shows is when ground ball rates and fly ball rates stabilize.

While the league ground ball rate has increased since 2002, the standard deviation has trended downward slightly overall but has been relatively stable since 2008. The 2008 point reflects the change in the distribution of GB%, which became normal in 2008 and has shown no significant skew since then. 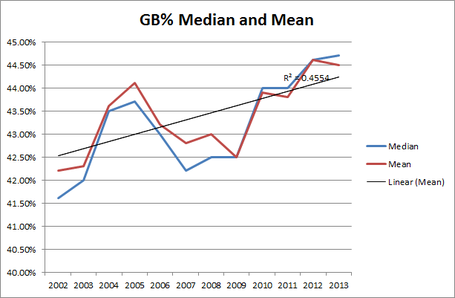 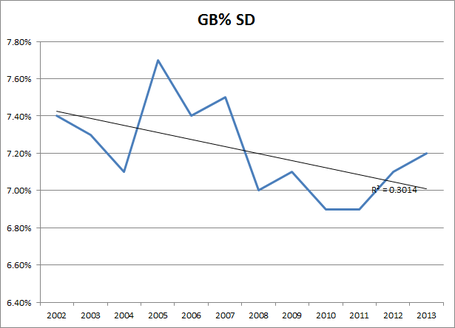 Some measures of fly ball rates, including the standard deviation and the mean, show no significant trends in any direction, though there has been a large decrease in the mean fly ball rate since 2009. Despite the considerable variation, the standard deviation in any given year for fly balls is generally smaller than for ground balls. The distribution has been normal each year since 2002 and hasn't changed very much. 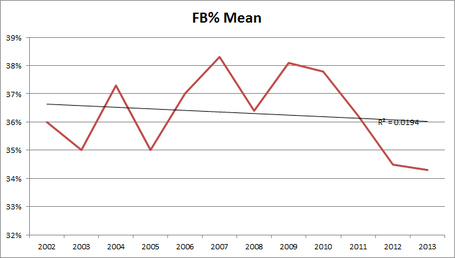 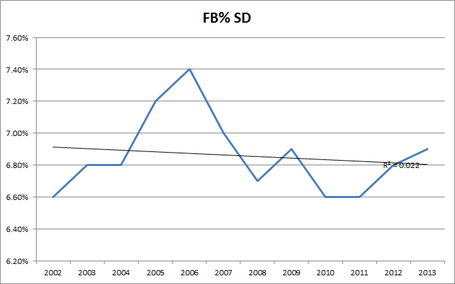 The inference from these data is complicated given the interaction with batted ball data. A pitcher can be both a high walk and a high strikeout pitcher, allowing for separate interpretation, but a pitcher can't be both a high ground ball and high fly ball pitcher. An increase in one almost necessitates a decrease in the other, depending on the unstable line drive rate.

Are pitchers succeeding in increasing ground balls, decreasing fly balls, or both? In other words, are pitchers differentiating themselves based on the ground ball rate or the fly ball rate? Given the change in distribution and larger standard deviation of ground ball rates, I'm inclined to say the ground ball rate is the source of differentiation. Regardless of which it is, fewer pitchers now fit within one standard deviation from the middle in both ground ball rates and fly ball rates than before. There could be many reasons for the shift -- perhaps teams are starting to prefer the extremes because the predictable tendencies of an extreme ground ball pitcher or extreme fly ball pitcher can be exploited in run prevention (the Pirates' and Athletics' strategies), which means that teams are selecting pitchers who are further away from the middle.

Now that I have standard deviations for walk rates, strikeout rates, and batted ball rates, I can use these data to look at performance. The foundation built by this research will allow me to look at how well pitchers perform grouped by standard deviations from the middle, though defining the "middle" depends on whether the distribution is normal or not. I can also look at trends in pitcher performance over time as a means to become informed about potential future performance.

Kevin Ruprecht is a contributor for Beyond the Box Score. He also writes at Royal Stats for Everyone. You can follow him on Twitter at @kevinruprecht.