After five years away from pro baseball, veteran lefty Mark Mulder has signed a minor league deal with incentives with the Angels.

The last time Mark Mulder threw a pitch in a major league game, BlackBerries were popular and the Boston Red Sox were the reigning World Series champions. Today, only one of those things is accurate.

Marred by shoulder injuries, Mulder spent 2008, his last season in baseball, mostly in the minor leagues -- throwing 34.1 innings between High-A and Triple-A and only 1.2 innings with the St. Louis Cardinals. He officially retired in 2010 after the Cardinals bought out his contract following the 2008 season.

On New Year's Day, it was announced that the Los Angeles Angels of Anaheim signed Mulder to a minor league deal. From MLB Trade Rumors:

Mulder's deal includes no guaranteed money, tweets Jeff Fletcher of the Orange County Register. He will have to make the opening day roster to guarantee his $1MM base, and must stay active and in the rotation for the full season to reach the $6MM in incentives, according to Fletcher.

Here's the thing: Mulder is 36 and hasn't pitched professionally in five seasons. When he announced that he would be attempting a comeback, a minor league deal was to be expected because no team would give him a major league deal after that much time away from the game. Being able to pitch for a spot on the Angels' Triple-A affiliate rotation would be the biggest test for him in spring training.

Personally, I wouldn't expect Mulder to start out so high in Triple-A. He has to shake a lot of rust off his mechanics and the team has to see if he still has the velocity to succeed. A short stint in High-A and a promotion to Triple-A would seem like the smart thing to do to ease him back into baseball. The most fans should hope from his pitching is that he can command the ball, he can keep the ball in the park, and not walk too many guys. Mulder was never known for his strikeout rates with a career K/9 of 5.71 in nine seasons, and there's no reason to expect much more than a K/9 of 3.5-4.5. He does have a career BB/9 of 2.82 and a HR/9 of 0.97, so those would be some stats to keep an eye on.

To compare with other players who completed an MLB comeback following at least three seasons away from pro baseball, I took a sample of players who did not pitch and are in a similar age range or older. Salomon Torres spent three years away from pitching and spent a year in Korea prior to returning as a pitcher for the Pittsburgh Pirates. Dave Stieb was away for four years before returning to the Toronto Blue Jays. Jose Rijo did not play for five seasons due to an injury, then came back to pitch for the Cincinnati Reds. The following stats are Torres', Stieb's, and Rijo's lines in their post-return career and the ages they threw during that time.

Yes, it's a small sample, but a comeback is not impossible. Anything even close to the numbers above could prove to be a valuable asset to the Angels rotation this season. One thing to note is the amount of games started -- it looks as if Torres, Stieb, and Rijo were used more as relievers during their return to baseball. That's another possibility for Mulder's return. It would be less innings, but seemingly more doable at the beginning of the season with the chance to stretch his innings/pitch count as he eases into the role.

Brooks Baseball shows that Mulder still had some gas left on his fastball when he last pitched in 2008. 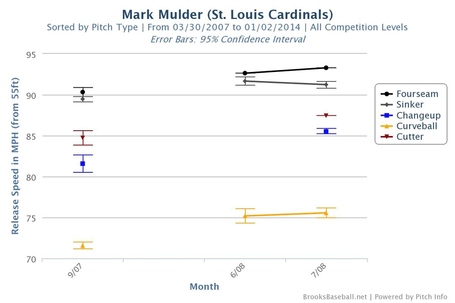 His velocity likely would've dropped three to five miles per hour, I would assume, but that would put him in the upper 80s/low 90s MPH range. I wouldn't worry too much about his velocity if he could at least have plus command of his pitches. Having a fifth starter who can throw like that and can keep the ball in the zone for the most part would be beneficial, but of course, this is all hypothetical.

The Angels aren't in a position to be picky with their players, especially with a lack of pitching depth in the minor leagues. Signing Mulder is a low-risk, low-reward move. He wouldn't be displacing anyone in the current rotation and he wouldn't be blocking a top prospect from being promoted.

If -- and that is a huge if -- Mulder has the tools to return as a major league pitcher, I don't see him being anything more than a fifth starter. His last full season in MLB was 2005, when he pitched 205 innings in 32 starts.

As 2005 was nine years ago, expecting Mulder to return to pre-shoulder injury form would be setting the bar very high. There's no concrete way to look up the success rate of pitchers returning from five-plus seasons away from baseball because there's no easy way to find a list of every single player who has attempted a comeback (and if they tried and failed, it probably wouldn't make it into Baseball-Reference's pages), but I'd have to imagine that it's a low number. Throw in his injury history and that would even lower the potential success rate.

Realistically, there isn't much, if not anything, to expect from Mulder signing this deal with the Angels. Even if he has a major league camp spring training invite, I highly doubt that he would start anywhere but the High-A/Double-A level or higher at first. This deal obviously shouldn't be the last pitching deal the Angels make if they want to be over .500 in 2014. But it certainly isn't a deal to be upset over.

All statistics and information courtesy of FanGraphs, Baseball Reference, and Brooks Baseball.

Jen Mac Ramos is a contributor for Beyond the Box Score. You can follow her on twitter at @_jenmac.