The ERA / FIP gap and controlling the running game

There are a lot of things that can account for the difference between a pitcher's ERA and his FIP. One that flies under the radar is a pitcher's ability to prevent the stolen base.

Share All sharing options for: The ERA / FIP gap and controlling the running game

[Editor's Note: Please welcome Nick Ashbourne to Beyond the Box Score! This is his first article for the site.]

When Voros McCracken opened the gargantuan can of worms that was "Defense Independent Pitching Statistics," or "DIPS" -- it really changed the way we think about pitchers. Recent lucrative free agent contracts given out to pitchers like Tim Lincecum and Ricky Nolasco are a testament to the fact that some front offices believe that fielding independent numbers are a greater indicator of value than traditional numbers like ERA. After all, in these two cases the Giants and Twins invested tens of millions of dollars into pitchers who have been below-average when it comes to run prevention.

According to Baseball-Reference's version of pitching WAR, Nolasco and Lincecum have been worth a combined -0.5 WAR over the last two seasons despite pitching a total of 774 innings. On the strength of that work they will bring in a total of $84 million on their new contracts. On the flip side of the coin, Fangraphs uses a Fielding Independent Pitching (FIP)-based version of WAR that states that this duo has been worth eight WAR over that aforementioned time span. You either have the option to believe that Nolasco and Lincecum have been solid starters of late or that they have been among the worst pitchers in the business. The truth probably lies somewhere in between.

As a result of the explosion of DIPS theory, analysts often compare a pitcher's run prevention with his peripherals in order to try and pinpoint exactly where his value lies. In general, over long periods of time ERA and FIP tend to be pretty close -- but there are a few examples of a massive disparity between the two that can leave sabermetricians scratching their heads.

For a long time, Ricky Nolasco was something of mystery. It was always assumed that his ERA would eventually come in line with his peripherals as his luck evened out, but it never did. Even in 2013 when he finally posted an ERA under four -- at 3.71 -- his FIP was a much stronger 3.34. Brandon Morrow was also a guy whose ERA never came close to touching his FIP for years, until 2012 when that trend was completely reversed. It's almost impossible to know what to make of Morrow going forward.

For every story about a pitcher's ERA lagging behind his FIP, there is one about a pitcher who continues to succeed despite less than stellar fielding independent numbers. Perhaps the most famous two examples of this phenomenon are Matt Cain and Jered Weaver. Both pitchers have prevented runs like aces with underlying numbers that are far less flattering -- though not miserable by any means. While pitchers are not considered to have much control over their BABIP, this duo has conceded BABIPs of .264 and .271 respectively. One of the most consistent explanations for that is Weaver and Cain's ability to force popups and harmless fly balls that are incredibly unlikely to result in hits.

Whenever this is a discrepancy there will be attempts to explain it. In theory, FIP operates as a reasonable ERA predictor over the large sample. Explanations for disparities between ERA and FIP include but are not limited to: struggles out of the stretch, the ability to force popups, pitch sequencing, and many more possibilities. Today, I figured I would examine another possible factor in the gap between ERA and FIP that is less frequently discussed: controlling the running game.

Who deserves credit for throwing out baserunners? 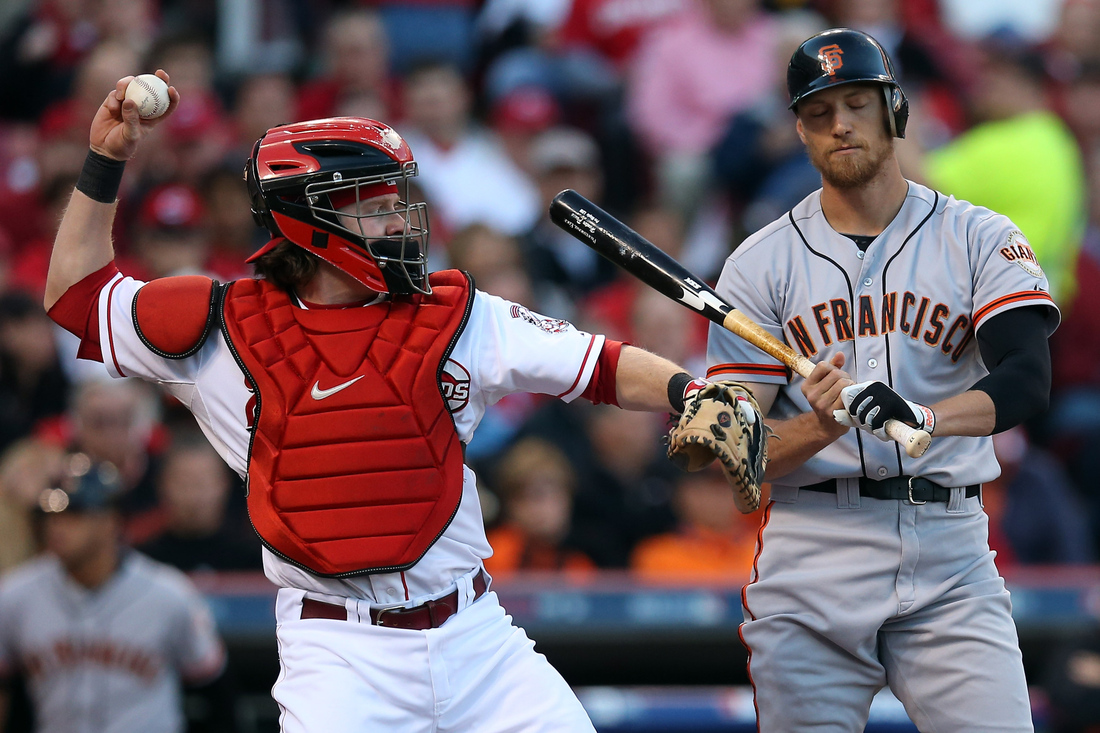 It's very difficult to determine the precise culpability of any given stolen base. Catchers are the face of defense against the running game, but pitchers also play an immensely important role. First base coaches wouldn't have stopwatches if it didn't matter how long it took pitchers to get the ball to the plate. Over time it becomes fairly clear that holding runners is a skill that some pitchers have and others do not. Although it's hard for us to measure precisely due to the participation of another player (the catcher), it's there.

The easiest examples to conceptualize are found on the extremes. For example, in 2007 A.J. Burnett allowed 31 stolen bases and there was not a single runner caught stealing while he pitched. Although the Blue Jays' catchers, -- led by the noodle-armed Gregg Zaun -- were not very good at gunning runners out they managed to catch 23.3% of basestealers when Burnett wasn't on the mound. It's pretty clear that at least some of the blame goes to Burnett. On the other extreme, Reds starter Johny Cueto has only allowed 16 runners to successfully steal against him in 964.2 career innings pitched with 30 runners caught stealing. He's had the luxury of an excellent defensive catcher in Ryan Hanigan for many of those starts but that alone doesn't explain how completely he is shutting down opposing baserunners.

If we accept the premise that preventing stolen bases is a skill for pitcher, albeit one that is impossible to isolate and measure perfectly, then it is worth examining how it affects their total production. Controlling the running game is exactly the sort of thing that ERA accounts for but FIP does not. To be fair, considering that FIP is comprised of only the factors of walks, strikeouts and home runs, then there are a lot of things it doesn't account for. Stolen bases against is a pretty minor one of those things -- but one that is overlooked in my view.

In order to see if stolen bases against had anything with the relationship between ERA and FIP I looked at every pitcher who had pitched 750+ innings over the last five years and sorted them by how many stolen bases they allowed per nine innings. I wanted to use a longer time frame to help ensure that I was demonstrating pitchers' actual ability to hold runners, given that a single year sample can be fairly volatile. My search resulted in a sample of 58 pitchers. Instead of laying a table with 58 rows on you instead I'm going to show you the top and bottom quarters in terms of stolen base prevention. A quarter of 58 is actually 14.5 but I figured instead of cutting someone in half for so trivial a study, I would stick to 14 pitchers for the top and bottom quarters. Without further ado, here are the top 14 pitchers in stolen base prevention over the last five years:

This chart is a bit all over the place, but at the end of the day nine out of the fourteen pitchers here have ERAs below their FIP. The average pitcher on this list has an ERA 0.19 below their FIP -- which is interesting. Also interesting is the fact that there are only three left-handed pitchers here, when left-handed pitchers often are thought to be superior at preventing stolen bases. Johnny Cueto is in his own league in this area, and although he has had good defensive catchers, allowing nine stolen bases over five years is quite the feat.

When we look at the pitchers that have allowed the most stolen bases the effect appears it be weaker, but not quite nonexistent:

Here the ERAs do tend to be higher than the FIPs -- as one would predict -- but not to a great extent. The average ERA here is only 0.06 higher than the average FIP, although nine of the fourteen pitchers are underperforming their peripherals. Trevor Cahill and Ervin Santana really do shake up the numbers here with much better ERAs than FIPs. Once again we have a pitcher who is head and shoulders above the rest, this time for all the wrong reasons, in A.J. Burnett. It's worth nothing there are a couple of lefties here, showing that handedness might be less of a factor in holding runners than one might have thought. To sum all of this up the totals are in the chart below. To be crystal clear when I say "Top 14 pitchers in SB/9" I mean those with the lowest numbers:

* - This would be -0.14 if the mysterious Ricky Nolasco wasn't in this section.

In theory, FIP is supposed to be a better estimator than ERA when it comes to assessing a pitcher's value -- partially because it only judges the elements that a pitcher can personally control. However, stolen bases against is within the pitchers control, to a degree. It is a skill, even if it very difficult to quantify in a precise manner. SB/9 is an area where there isn't much difference between a lot of pitchers in the middle, but there is a huge difference at the extremes. Johnny Cueto is almost impossible to run on and FIP is never going to give him credit for that. Conversely, A.J. Burnett gives away bases willy-nilly -- it's hard to classify something that occurs 1.326 times per nine innings as willy-nilly but you take my meaning -- and FIP won't punish him for it even though it is largely his fault.

Pitchers are very difficult to evaluate and FIP and all DIPS are immensely valuable, but there are tiny things that can slip through the cracks. That's fair; FIP doesn't claim to be perfect. However, the more of these tiny things we can collect and examine the easier it will be to understand the dichotomy between pitcher performance and run prevention. Time will tell how the contracts to guy like Nolasco and Lincecum will turn out, but those front offices probably think they have figured out the answer as to why these guys were under-performing based on their FIP. Their confidence is measured in the millions of dollars they committed to a pair of guys who have struggled with run prevention in recent years. I admire that confidence, but based on all the factors that go into the difference between ERA and FIP, I'm not sure anyone has that answer completely nailed down just yet.