In case you haven't heard, Robinson Cano signed a 10-year, $240 million contract with the Seattle Mariners. As I write this, the exact structure of the deal has yet to be made public. Will it join other head-scratching contracts like those for Albert Pujols, Josh Hamilton and Prince Fielder? Only time will tell -- but we can analyze how past second basemen have performed to determine reasonable expectations.

In 2013, Cano had a FanGraphs WAR (fWAR) value of 6.0, 12th-best in the major leagues. Since this is my first post for Beyond the Box Score, I'll state that I use both FanGraphs (FG) and Baseball-Reference (B-R) since both offer features and metrics I find useful. In this case, I'm using FG's WAR value (B-R's was 7.6, fifth-best) because FG adds a feature translating WAR into a dollar value. It suggests Cano delivered $30 million of value last year (this post gives greater explanation as to how the value is calculated), so at least in 2013, Cano not only would have lived up to his new contract, he would have outperformed it by a healthy margin.

Cano will be 31 when the 2014 season opens. This chart, generated using the B-R Play Index feature ($36/year, the best money you'll ever spend, but you already knew that) shows the most productive second basemen by WAR since 1901 at ages 31 and older (view the entire page here):

As mentioned, each point of WAR is worth approximately $5 million and rising, so the second basemen in this list delivered anywhere from around $100-$280 million of value after reaching 31. Another way of stating it is that the top five second basemen in baseball history would have lived up to Cano's contract. It's a very high bar, one I'm not categorically stating Cano is unable to reach, but several current and future Hall of Famers couldn't do it.

The question isn't where Cano is right now, but his production going forward. This chart shows the number of second basemen since 1901 with 300+ PA in a season, stratified by age: 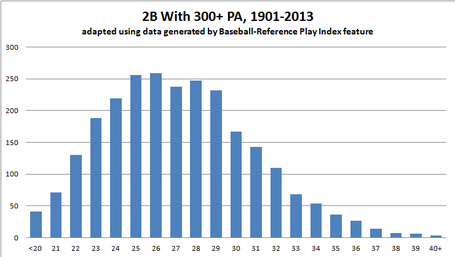 After 35, there's a term for second basemen still on major league rosters -- it’s called "utility infielder," a position that typically pays a bit less than $24 million a year. It's a high standard, and baseball history shows players simply begin falling apart around the age of 32. Despite better conditioning, salaries and travel accommodations, the body is still the body, and absent the true outlier, players simply can't handle the rigors of major league baseball much past their mid-30s. Those who can usually have a Sunday in July set aside for them in Cooperstown.

This next chart acknowledges that $24 million in 2023 will be worth less than in 2014 and scales the WAR values accordingly: 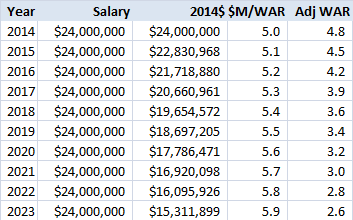 The chart assumes 5% interest and scales WAR value using the current $5 million per WAR point and increasing it by $100,000 a year. The aggregate WAR needed to justify Cano's contract is around 35.9, which has been achieved by seven players after reaching 31 as shown in the very first chart. Again, not impossible, but indeed a very high threshold. To date, Cano has accumulated a WAR of 37.1 -- this contract assumes he'll be able to maintain that level of productivity for the next 10 years. If he does, good for him -- it will place him solidly in the top 10 second basemen of all-time. That's a player deserving of big bucks.

But it won't be easy, and could very well be unprecedented. This table shows the number of 5+ rWAR seasons by second basemen by age, adapted from B-R data: 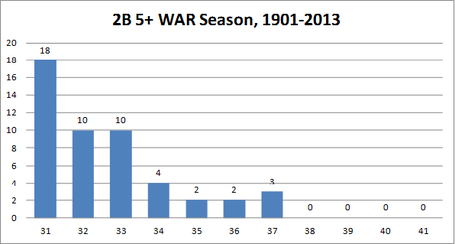 There have been 49 such seasons in the past 113 years -- to justify his contract, Cano needs to have around seven or eight seasons with a rWAR of five or better. If he accomplishes this, he alone will increase the number of such seasons by around 15%.

The Mariners have money to spend on two different fronts -- a locked-in TV deal that delivers $100 million a year (I’ll plug this FanGraphs piece by Wendy Thurm with my dying breath) and only around $50 million in payroll obligations for 2014. Their problem is they have holes everywhere. Theirs is the rare roster of old, young and uniformly bad, and the AL West is the wrong division in which to try to pull that off. They're in very good shape with pitchers like Felix Hernandez and Hisashi Iwakuma, and play in one of the most pitcher-friendly parks in baseball. However, that’s another reason why the Cano signing is so puzzling -- there’s no reason to believe Cano won’t continue to have productive offensive seasons, but his numbers will be dampened by playing half his games in Seattle.

The Mariners got 99 problems but second base ain’t one, at least not after Friday. Paying $240 million to one player may preclude obtaining another quality player, but they’re disappearing quickly this offseason as it is -- about the only person who interests me is Carlos Beltran and he could be gone by the time this is posted, and is a stopgap at best anyway. I’m not sure where the interest for Shin-Soo Choo is (and why there appears to be so little), but I’d expect him to approach Jacoby Ellsbury-like money. I could be talked into Stephen Drew as well, which would be an affordable signing. Beyond that, no thanks.

This last chart shows both Mariners attendance and number of wins from 1990-2013: 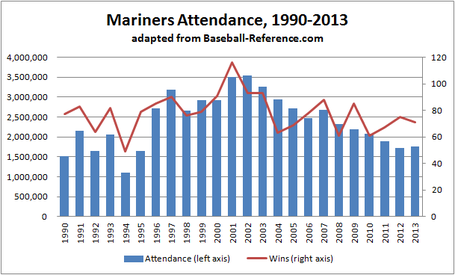 Attendance has been on a prolonged slump since the glory days of the early 2000s and the Mariners needed to do something to make a splash. The most recent Forbes list ranks the Mariners as the 12th-most valuable MLB franchise with a value of $644 million, and more importantly, revenues of $215 million and operating income of $12.9 million. They’re not a poor team and appear to be ready to spend with the best of them.

One way to view Cano's contract is to compare it to the recent signings of Dustin Pedroia and Chase Utley. Pedroia's is for eight years and $110 million, Utley's is for two years and $27 million with three additional years of team options totaling $45 million. I'm biased in that I wouldn't sign ANY player who's reached 30 to anything longer than a five-year contract, and might, might go as far as seven for a key player if there are other teams in the mix, and if that player would be the one to push my team into contention. I'm very comfortable stating Cano is the best second baseman in baseball today and can be expected to remain so for the next three or four years barring unforeseen events, I just think a team in the Mariners' situation would be better served using that amount of money on more than one player.

Every year I tell myself "this is IT" in terms of the long-term, big-dollar free agent signings. As a method of team-building it can be argued free agency has never worked and is best utilized like the Cardinals, augmenting needs to supplement excellent drafting and development. If Cano was the final piece of the Mariners' puzzle, I could be talked into his contract possibly on the grounds that I'm willing to eat five years of bad contract at the end of a deal as the price for a championship today, but I will never call a 10-year, $240 million contract justified. Can Cano live up to it? Of course he can, anything is possible, and it has been done in the past. It’s just highly unlikely.

Scott Lindholm is a contributor to Beyond the Box Score. You can follow him on Twitter at @ScottLindholm.