WAR of the Ages

Share All sharing options for: WAR of the Ages

Last week Ari Berkowitz wrote an article here at Beyond the Box Score exploring the reasons why Major League Baseball seems to be trending younger in recent seasons. While Ari showed that the average age of ballplayers is on a steady decline since 2004 or so, I was curious how Baseball-Reference's WAR might view the changing of the tide. 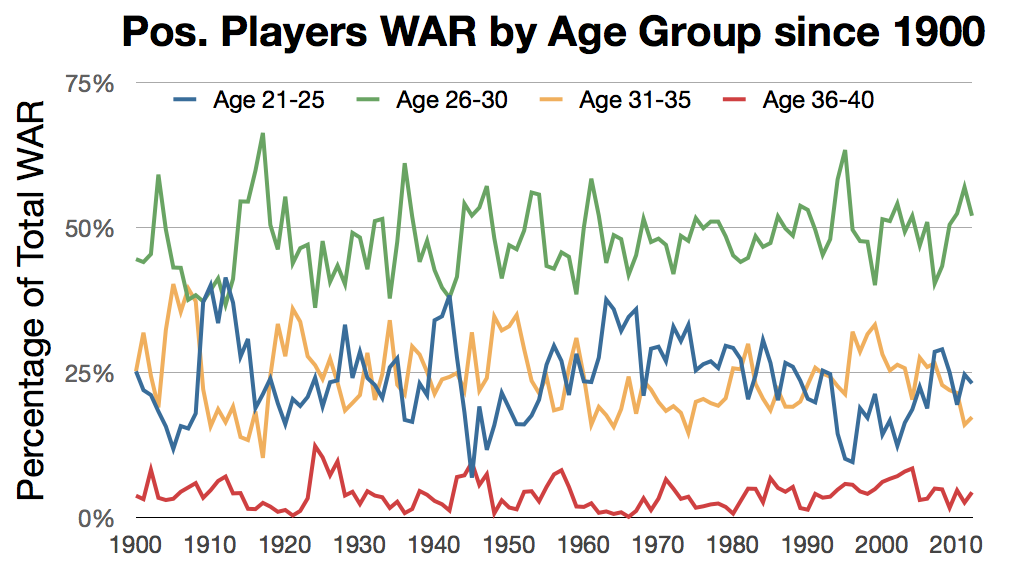 The game has gone through many changes over the years, but the 26-30 age group has generally brought home around half of all position player WAR, especially since WWII. This group essentially represents the bread and butter of batters in the league, while the 21-25 and 31-35 groups seem to have been battling for superiority over the other for nearly the entire span of baseball's history.

We see the exact trend Ari referenced in his article when examining the 2005-2010 time frame, where the age 21-25 group has been steadily on the rise. But what we may often overlook is that this recent triumph of youth is really just a return to baseball's status quo beginning in the 1960's up until the onset of the 1990's.

It is perhaps not so much of a coincidence that the brief reign of 31-35 year-olds happened to coincide with what we often refer to as the unofficial steroid era. This spike that occurs roughly from 1995-2005 could certainly be viewed as evidence that players of that age may have had access to medical techniques that prevented the performance decline that players of that age form other eras experienced.

It is also worth noting that the 31-35 group also seemed to surge in the years immediately following World War Two from 1945-1955, but the reasons for this could have very little to do with baseball.

If we look at the evolution of Pitchers WAR for these four age groups, however, the unprecedented degree of strangeness in the range of years from 1995-2005 becomes undenyable: 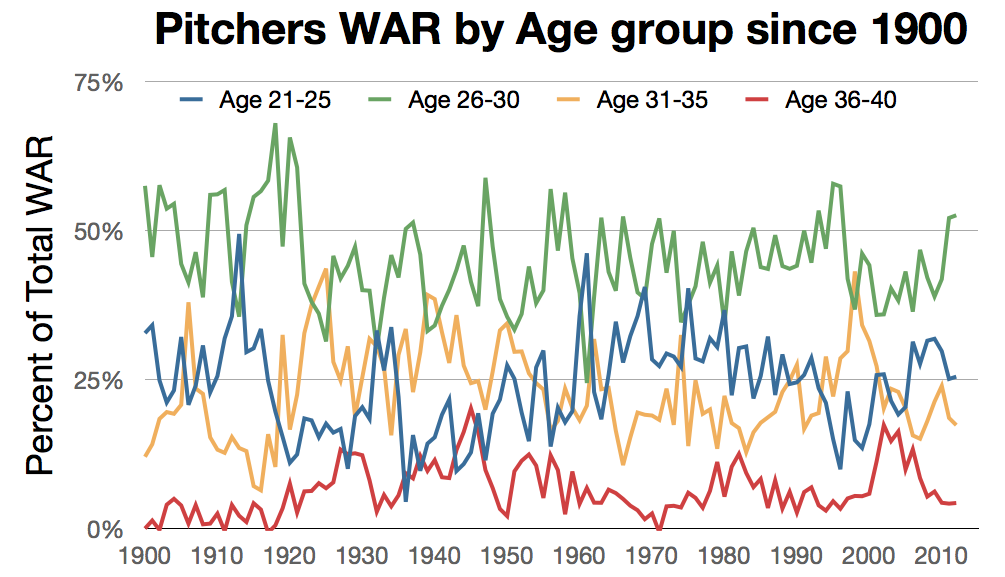 Young pitchers in the 21-25 group saw historic lows during this period, but their brand had been on a steady decline since peaking during expansion in 1961. Fortunately, however, the group has since recovered from their late nineties drought and have become increasingly relevant in recent seasons, perhaps even taking away from the traditionally dominant 26-30 age group.

So while it is certainly true that organizations seem to be targeting younger position players and especially younger pitchers, this trend is really nothing new. In fact Baseball's youth movement seems to be nothing more than a return to the way things were; a return to the game a number of us grew up with in the '60's '70's, and '80's.

Thanks to Baseball-Reference for supplying WAR data, and the Lahman database for birth year information.