Why has the MLB been getting younger?

An analysis of the possibilities for why Major League Baseball has been getting younger every year.

Share All sharing options for: Why has the MLB been getting younger?

Last season a couple of highly touted prospects started their careers in a very convincing fashion. Obviously, I am talking about Mike Trout and Bryce Harper. While Mike Trout was truly amazing, Harper was still quite impressive especially for a rookie. Harper and Trout are just two examples of the MLB getting younger as a whole. Another great example of this is that out of the top ten offensive WAR leaders this past season four were 25 or younger while just ten years ago, in 2002, there was just one such player in the top ten. 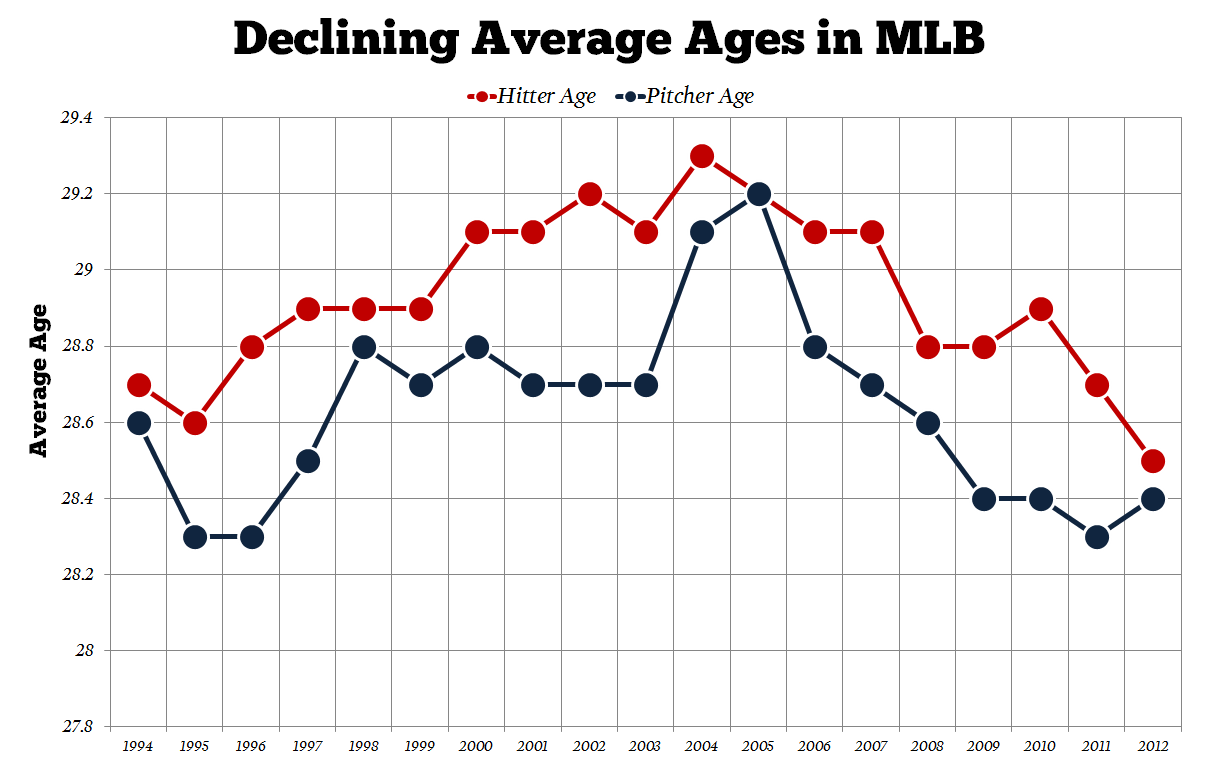 The chart depicts the most recent drop in age across the MLB, starting in 2005. Starting in 1994, what most people consider the beginning of a new era in baseball, the MLB as a whole started to get older. You have to go all the way back to 1995 for the last time the MLB was this youthful. As for the decline in age we witnessed from '94 to '95, my guess is that owners were trying to suppress player salaries and did that through utilizing younger and cheaper players. Teams were comprised of younger players back then probably for the sole reason that they were cheaper . As for today, there are probably a few factors that have been playing a hand in the most recent downward trend in age across Major League Baseball.

Ever since the Yankees spent $1.6 million on the Venezuelan outfielder, Jackson Melian, back in 1996 International Free Agency has played more and more of an integral role throughout the game of baseball. We've gotten to the point where signing 16 year old IFAs is no longer a market inefficiency but rather a competitive requirement. What we're witnessing today is probably a consequence of the international market being properly exploited. Major League Baseball's recent exploitation of the international market has led to more players starting their pro careers at the extremely raw age of 16.

This has created a situation where players start their careers two years younger than has ever been the case which has led to more young and skilled players than ever before and has raised the overall minor league talent level. Just as high school players reach the majors at a younger age than their college counterparts, so too 16 year old IFAs tend to reach the major league level the earliest. Logically, the younger you are when signed, the younger you make it to the major leagues. Because of the larger pool of players to select from, fewer USA born players are in the minor leagues than ever before and the ones that are have to keep up with the constant influx of younger international talent. 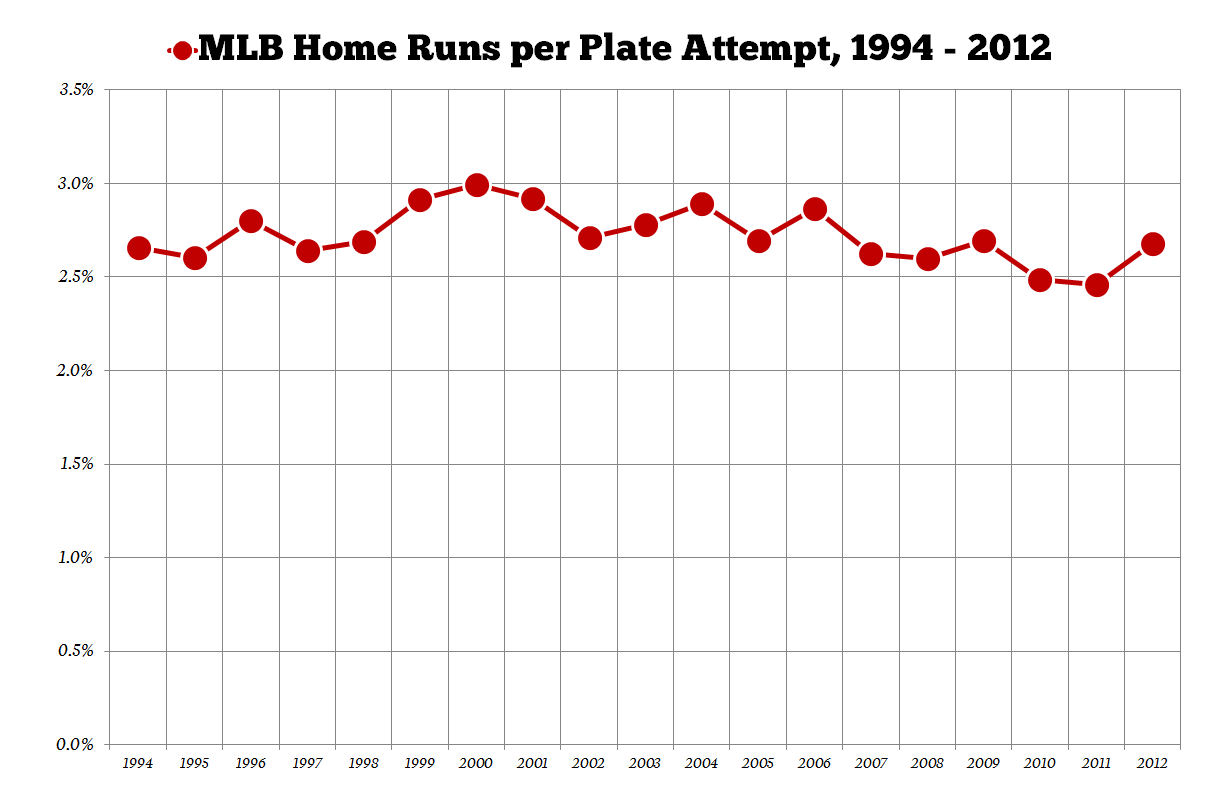 Interestingly enough, while looking a lot more erratic, the rise and fall of the league's HR/PA follows a similar pattern to the one in seen in the previous chart depicting the league's average age. Homers have been trending downward and are at the lowest they've been in about 20 years. The relevancy of this graphic pertains to the relationship between homeruns and stolen bases. Over at FanGraphs, Bradley Woodrum touched on this very subject a few days ago. The fewer homeruns hit, the more valuable a single stolen base becomes. Therefore, the decline in power across the major leagues has led to a new-found importance of speed.

This has put more of a premium on speedier players and unlike power hitters who deteriorate fairly well, speedsters see a quick erosion of talent and a very steep decline. In today's game, the younger you are the more prevalent your speed is, thus the more desirable of a commodity you are. Additionally, directly related to the rise of newfangled fielding metrics like UZR and SAFE, teams have started to realize the importance of being able to cover ground and sufficiently field. Surprisingly, those players who tend to be able to cover a lot of ground are usually the same players who are able to steal a lot of bases.

There is no arguing that the previous generation of baseball players lasted much longer and performed much better late into their thirties. What steroids do is, for a short period of time, enable your body to act as if it's biochemically and biologically 10-15 years younger than it actually is. If you connect the dots, this would have led older players to be able to stave off their decline phase and continue performing and receiving big paychecks well into their thirties. While this could very well be, I'd be remiss not to mention that I know close to nothing about biochemistry and how ones body is affected by heavy doses of anabolic steroids. I am also unfamiliar with any baseball reporters that has tackled this issue at length.

Remarkably, sabermetrics has provided every baseball team the opportunity of being cheap and not looking bad doing so. Sabermetrics has been revolutionary in its role in determining a player's value. Numerous studies have been done on the subject leading to something called net value. Teams are constantly looking to add more net value, as opposed to just value.Net value is simply a player's value above his salary, value is determined via WAR and converted into dollars using the annual average price of a win.

Consequently, ceteris paribus, the cheaper the player the more valuable he becomes. This has led to teams putting a lot more money into the draft and develop method than ever before during the free agency era because when those players graduate they're cost controlled and make only a half million dollars a season. That makes young players extremely valuable commodities. Due to their low cost, the value they produce is all in excess of their salary or in other words, surplus value. Teams have recently started reaping the benefits of heavy investments in the draft of develop method, the Rangers and Red Sox are great examples of this.

The rise in importance of player development has led to more draft picks and prospects reaching their potential and becoming major league stars at a young age. In addition, while a team might have payed a couple million dollars for borderline major league veterans to fill out their bench, today teams know they can just use their lesser minor league graduates for those roles and save that money.

While steroids may very well be the cause of the MLB youth movement, we'll never actually know the extent of steroid use during the '90's and early '00's. It would then be ludicrous for anyone to come to specific conclusions regarding the steroid era and how it affected baseball players personally or collectively. We are consequently limited to those explanations rooted in logic and the one that seems to trump all others is that of market inefficiencies. Oddly enough, there's actually been a book written about market inefficiencies in baseball. That book just happened to be adapted into a movie and nominated for an Oscar last year. I watched the movie and was disappointed to find out they shamelessly left the main message of the book out of their Hollywood film.