With the possibility of Alex Rodriguez losing even more playing time in 2013, let's take a look at what implications this could have on the fate of one of the most famous records in baseball.

Share All sharing options for: What A-Rod's Injuries Have Done to the Career Home Run Race

With the recent allegations that New York Yankees third basemen Alex Rodriguez had received performance-enhancing drugs from a clinic in South Florida, it now seems even less likely that the accomplished fourteen-time All-Star will pass Barry Bonds as baseball's all-time home run leader before his career comes to a close.

Rodriguez's announcement late last month that he would require hip surgery before spring training seemed to suggest that he would not be seeing much on-field action for the Yankees this season. And now, with suspicions of a possible suspension from MLB, any chance of meaningful playing time for Rodriguez in 2012 has been cast into further doubt.

A-Rod's chances of becoming Major League Baseball's undisputed home run king were very real not so long ago. During A-Rod's age 34 season just two years ago, the three-time MVP had amassed an insanely impressive 613 career home runs, almost a full 100 more than Bonds, Aaron, or Ruth had achieved by that age.

In fact, when the Steinbrenners and Co. offered Alex his new contract beginning in 2008, they even went so far as to include a 30 million dollar bonus if he were to surpass that 762 home run milestone while wearing pinstripes.

After two generally tepid seasons from A-Rod in 2011 and 2012, his once distinct advantage over his competition in cumulative Home Runs by age has now dwindled to just a 36 HR edge over the Babe. The rapid loss of optimism here for Yankee fans is quite staggering: 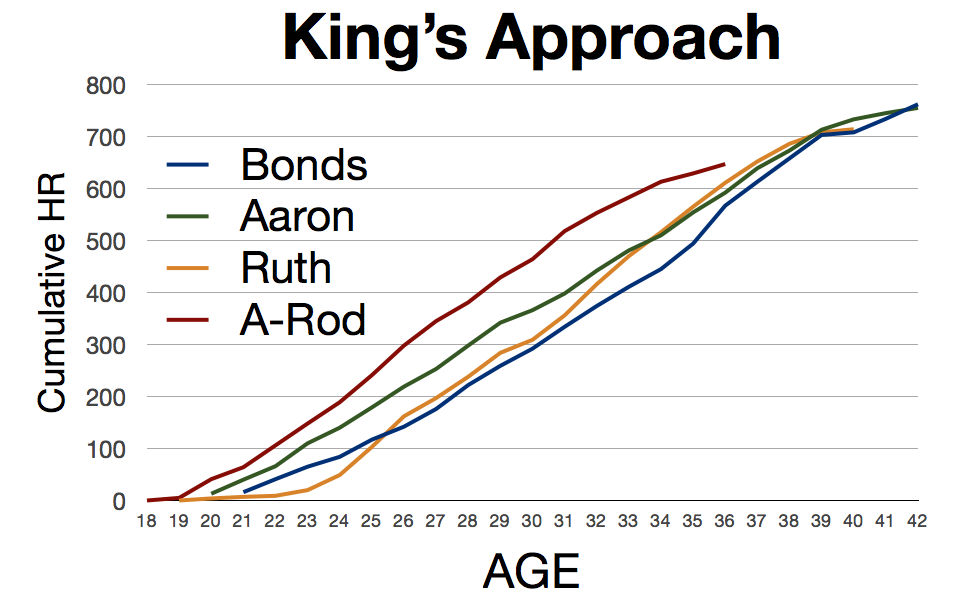 If Rodriguez's home run total does in fact sit completely idle this season, Ruth will have passed him with 652 Home runs at age 37, and Hammerin' Hank Aaron will have cut his deficit to just 8 HR.

A-Rod would then have 115 Home Runs left to catch Bonds to start his age 38 season. That would require Alex to average at least 29 HR per season if he hopes to break the record before his current contract with the Yankees expires in 2017, his age 41 season.

All data courtesy of the Lahman database.