Share All sharing options for: Player Value Graphs: A Look At Adam Dunn

It's not until around January when the offseason really starts to crawl for me. Most of the major free agents have signed, the winter meetings are over, and not much else is happening in baseball. We're just 15 days away from pitchers and catchers reporting to camp and then, the next thing you'll know, baseball will be back. I can't wait. Maybe one of the bigger questions (outside of Mannygate) left for baseball fans to ponder during these last few dark weeks of the offseason is:

"Why the heck hasn't anyone signed Adam Dunn?"

Adam Dunn, the 29-year-old LF with a career 130 OPS+ has been quietly waiting on the market for some team, any team, to tender him a contract. He drives traditional fans and the media crazy -- too many strikeouts! And, oh my goodness, did you see his batting average? -- but among most online baseball communities Dunn has drawn a little more appreciation. He's a very good hitter with pretty bad defense. I think that's a the best sentence anyone can use to describe Dunn. Recently on Beyond the Box Score, you might have seen a smattering of player value graphs. Today we'll be using the same graph format to check out how Dunn has been performing from 2002-08. 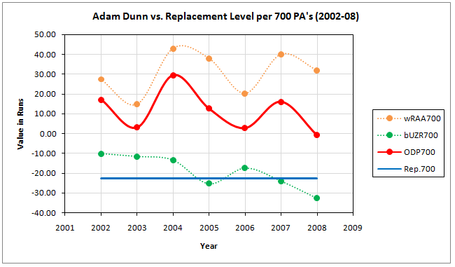 I'll define some of the terms quickly for first time viewers.

I'll end this post with a quick WAR calculation for Dunn in 2009. All projections are using CHONE and I've set the lgwOBA for my offense to .332.

In 2009, if Dunn is worth about +2.1 WAR, he should be looking for a 1-year contract around $10M. But, in this market, I can see him getting a little less. Maybe not the 1-year $5M number that was floated around, but a couple million under his projected value.

The fact is that Dunn isn't as good as his offensive numbers would lead you to believe, but he's still a +2 win player. Maybe not a difference maker -- despite the annual 40 HR's a year -- but he could be a good, solid addition to a team needing to make the push into a higher win total. I still think whatever contract he'll receive is one of the more interesting topics left on the free agent market. Just don't expect him to defend.