Newbie Hitters on the 2011 Hall of Fame Ballot, Graphically

Share All sharing options for: Newbie Hitters on the 2011 Hall of Fame Ballot, Graphically

We're a few weeks removed from the 2010 Hall of Fame election, an election that went rather swimmingly, I must say. While the results of this past election is still fresh in our minds, I figure there's no better time like the present to start making the case for some of the new hitters on the 2011 Hall of Fame ballot. The sooner we can start educating, the better for some of these players.

What's that you say? You mean the vast majority of the BBWAA doesn't subscribe to Beyond the Boxscore in their favorite RSS reader? Well, pooh. There goes my self-esteem. That also probably explains some of the latest results. Well, at least we can dust off the WAR graphs and begin to form some good, old-fashioned BBTF Groupthink Approved thoughts on who belongs in the Hall of Merit for next year.

Time to break out the tried and true WAR Trajectory graphs. In all graphs, we're plotting Sean (CHONE) Smith's WAR for individual seasons, ranked best to worst. The "HoF Zone" is a range that spans from the average Hall of Famer down to the 20th percentile Hall of Famer. The template comes from our own JinAZ, and a bunch of folks assisted in the effort of their creation. (Sky Kalkman, Jeff Zimmerman, Tom Tango, and Dave Studeman). 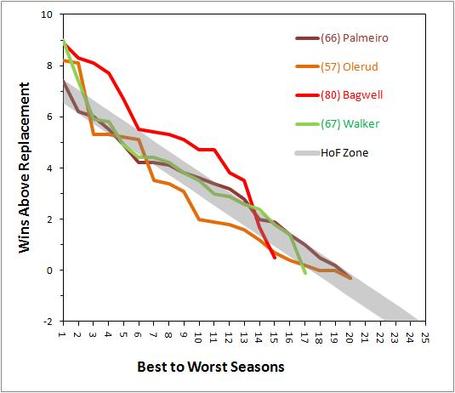 Jeff Bagwell is a no-brainer, at least I would think. If writers are looking for strikes against him, he doesn't have 500 homers or 3000 hits, and he inexplicably made just four All-Star teams over his illustrious 15-year career. Bagwell has more career WAR than Johnny Mize (70.1), Eddie Murray (66.7), Willie McCovey (65.1) and Harmon Killebrew (61.2).

My concern for Larry Walker is that he will get punished more for playing most of his career in Colorado than Palmeiro will for his use of steroids. I think in the early days of Coors Field, writers, fans and even GM's were prone to get a little enamored with the inflated numbers that came out of the high altitude. (Consider the contracts that this guy and this guy received as cases in point). The backlash has been is that too many people view all Colorado hitters with an unhealthy dose of suspicion now. Think of how many in the mainstream were yakking about Matt Holliday's Home/Road splits after he was traded to Oakland last year. This is why using WAR works, it neutralizes the crazy park effects. FanGraph's wRAA, which does not adjust for park on the player's career stats, gives Walker credit for 570 runs above average. After Rally made applied his park-adjustments, Walker's career RAA is 384. (Of course, FanGraphs does apply park factors when calculating its version of WAR).

In spite of the penalty, Walker is still very much in the Hall of Fame "zone". He's not a exactly a no-doubter like Bagwell, but he's up there with the likes of Groupthink Approved new HOM inductees Edgar Martinez, Barry Larkin, and Roberto Alomar. And he's right up there with Tony Gwynn, another player who hit .350 or better in multiple seasons. Walker did it four times, Gwynn, seven. Walker doesn't have the counting stats of Gwynn, but he won seven Gold Gloves and was one heck of a surprisingly good baserunner.

Jack Moore of FanGraphs took a good look at John Olerud's Hall of Fame case and found he compares well with Dawson. If you're a Dawson guy, you probably should consider Olerud as well. It would be cool to see someone wearing a batting helmet instead of a ballcap on their plaque in Cooperstown.

Lastly, we have Rafael Palmeiro, who is next in line to be the steroids whipping boy. I'm sure there are some who will argue his stats are better than McGwire's, but the gulf between the two isn't big. McGwire has three less WAR over his career, but had 3919 less plate appearances. Both players had their careers prolonged by steroids (I guess, I don't really know for sure), but McGwire did a little more with less, and his peak was better.

I would personally vote Bagwell and Walker, to go with Blyleven, Larkin, Trammell, Gar, Alomar and Raines for 2011. I don't know what to do with Palmeiro or McGwire.  Please don't pummel me with rocks, steroid-ambivalent folk.