The butcher, the baker, the Matt Shoemaker

Angels' starter Matt Shoemaker has had an up and down 2016 season, but a change to his repertoire has yielded better results of late.

Share All sharing options for: The butcher, the baker, the Matt Shoemaker

Matt Shoemaker of the Angels had a rough beginning to his 2016 season. In his first start, on April 8 against the Texas Rangers, he was roughed up in three innings, giving up six runs on seven hits. He rebounded in his next two starts, lasting six and six and one-third innings, and giving up only two runs—on April 19 against the White Sox.

But as people who love cliches like to say, all good things must come to an end, and for Shoemaker that brief run of good starts came to a screeching halt against the Mariners on April 24. In that game, Shoemaker gave up seven runs (six earned) on six hits—including two home runs—in three innings of work. His next outing on April 30 was even worse. He faced the Rangers once again, and this time he lasted two and one-third innings. He gave up seven runs on nine hits and struck out only one batter.

Shoemaker's next start was on May 11 against the Cardinals. While it wasn't as bad as his previous two outings, it wasn't good either. He lasted four innings and gave up four runs on seven hits with one strikeout and one walk. He recovered in his next start against the Dodgers on May 16. He gave up three runs on six hits while striking out five and walking two batters. He was taken out after pitching five innings and earned a win.

Then Shoemaker went on a run in which he didn't pitch fewer than seven innings in four straight starts, including his start on Monday night against the Yankees. And even though he earned the loss in that game, he lasted into the eighth inning. Amazingly, he earned only one win during those four strong starts—on May 27 against the Astros. He pitched to one no decision and earned two losses. The record won't show the improved performance. 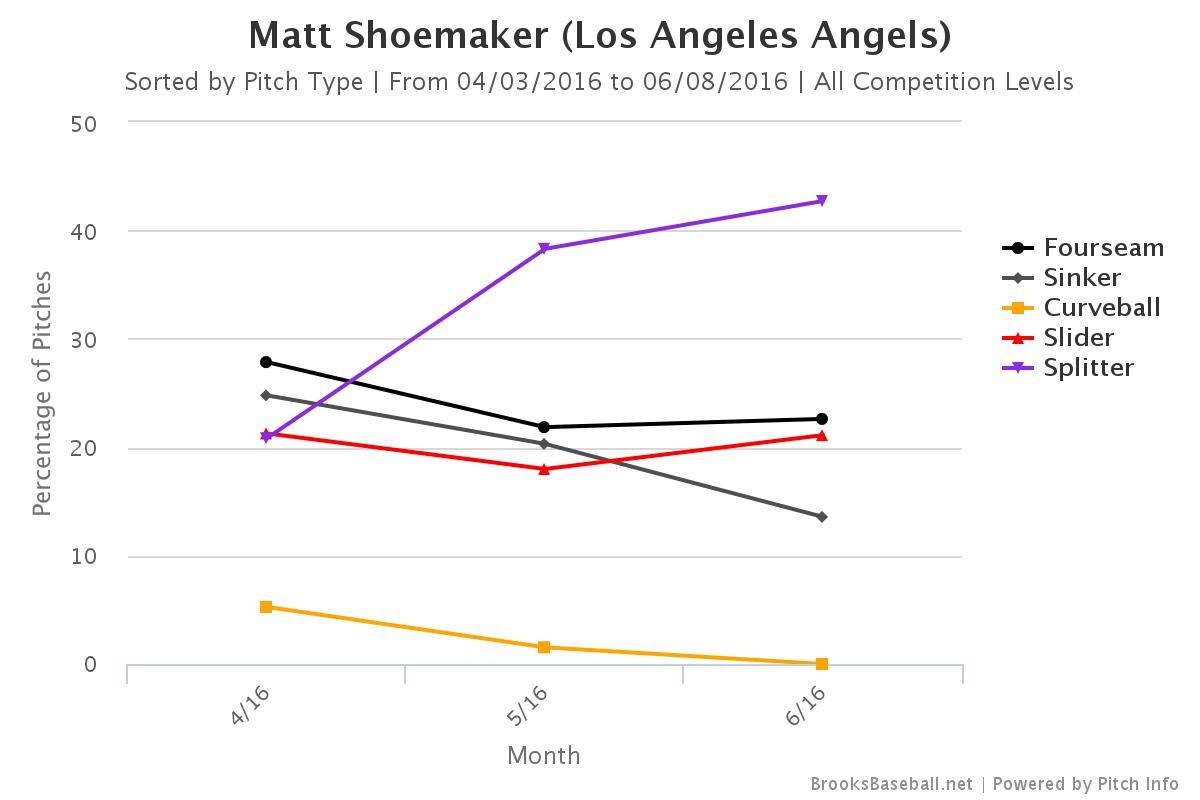 We're obviously dealing with a small sample size when you look solely at June because it has been only two starts, but when you look at the chart as a whole, you see just how much he relies on his splitter now and how that number took a big jump in May.

When Shoemaker's splitter is splitting, batters are missing it, especially low in the zone.

And naturally when the split misses, it gets hit.

The splitter and slider are Shoemaker's best two pitches for whiffs, and those are the only pitches that have not decreased in usage from April to June.

People are always taught to go with what works, and Shoemaker is doing just that. His splitter is working. Right now, he may not be getting the results that he wants in the win-loss column, but he has been able to prolong his appearances thanks to the adjustment he made with his repertoire and his splitter, and it may be worth taking another look at his numbers later in the season to see if Shoemaker continues relying on the split.

Stacey Gotsulias is a contributing writer of Beyond the Box Score. You can follow her on Twitter at @StaceGots.