On Wednesday, Max Scherzer tied the record for most strikeouts in a game. While it was impressive, it wasn’t as impressive as the other 20-K games and even Max himself had a more dominant effort in 2015.

I don't want to be a wet-blanket; I really don't. I mean, I stopped what I was doing on Wednesday to watch the last few innings of an historic performance by one of the game's best pitchers too ----- and I had plenty of things to do (like write my original article!). Max Scherzer pitched a great game. He showed off his electric stuff throughout the entire game, finishing the ninth inning with some dominant whiffs. However, Scherzer's 20-K performance was a full step behind the other 20 strikeout games thrown by Kerry Wood, Roger Clemens (2), and Randy Johnson and wasn't even his most dominant start of the last seven months!

Let's take a step back and talk about Wednesday night's game on a macro level. The Nationals won of course, but the Tigers had a chance to win throughout the duration of the entire game ----- even up until the last batter. Despite striking out 15 through seven innings, the Tigers still had nearly a 50 percent chance to win! 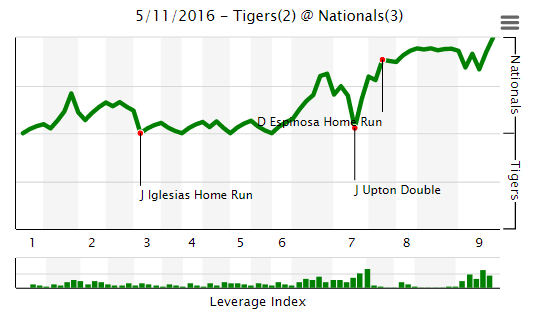 With one out in the seventh, Justin Upton blasted a double to center field moving Victor Martinez to third base. Scherzer buckled down and then struck out James McCann and Anthony Gose to strand both runners. It was a combination of getting hit hard and then dominating the bottom of the lineup, and Scherzer rose to the occasion. Detroit ended up with six hits, three of which were extra base hits including two hard-hit solo home runs from Jose Iglesias and J.D. Martinez. When the Tigers connected, they connected BIG.

Perhaps I'm being a little too hard on Scherzer, after all, he did dominate the zone, throwing 96 of 119 pitches for strikes, but how does this start compare with the other four 20-strikeout games?

Scherzer is the only 20 strikeout pitcher to give up two home runs in a game. He is also the only pitcher to have given up multiple extra base hits. Though his 81 percent strikes is the highest of any of the other games we have data for, he still managed to keep the Tigers in the game all night.

Kerry Wood's masterful performance against the Astros is still the cream of the crop and one of the finest pitched games in the history of baseball. Wood only allowed one single, and struck out 20 for a game-score record of 105.

Scherzer's win on Wednesday night did not even have the highest game score of his career. He achieved an even greater game score lsat year in his 17-strikeout no hit / no walk performance against the Mets. In that performance last October, Scherzer put up a 104 game score, awfully close to Wood's start.

Max Scherzer made history on Wednesday and no one can take that away from him. Strikeouts are fun (until there are too many and we all complain about the three ‘true outcomes) and the game was awesome to watch. Scherzer deserves all the credit in the world. Let's just keep in mind that even he himself has pitched more dominant games and in an era in which strikeouts are increasing at an increasing rate, he's actually thrown a more dominant game in a previous start.

Steven Martano is an Editor at Beyond the Box Score, a Contributing Prospect Writer for the Colorado Rockies at Purple Row, and a contributing writer for The Hardball Times. You can follow him on Twitter at @SMartano