Xander Bogaerts is adjusting to the adjustments

Pitchers figured Xander Bogaerts out in the second half of 2014, and he was never able to recover. Pitch data from 2015 suggests that he's changed his approach, and the results are starting to show.

Share All sharing options for: Xander Bogaerts is adjusting to the adjustments

[Editor's Note: This is Henry's first article with us. Welcome him aboard!]

Exiting the 2013 season, Xander Bogaerts was one of the most hyped prospects in baseball. He was coming off a playoff run en route to a World Series win that saw him perform well in clutch situations, generating .53 WPA in 34 plate appearances. Later that offseason, he was ranked as the second-best prospect in baseball by both Keith Law and Baseball America, garnering comparisons to Troy Tulowitzki for his offensive upside and ability to stick at shortstop defensively.

With expectations like that, anything less than immediate stardom was going to be disappointing, but Bogaerts' 2014 play fell short of anything resembling even basic success. Though things started out well, with a 137 wRC+ from March to May, he hit so poorly over the rest of the season that he was pushed from shortstop to third base in favor of Stephen Drew (yes, that Stephen Drew) and ended the season with 0.4 WAR and a 82 wRC+. He spent his offseason at the EXOS training facility in Arizona, working with new Red Sox hitting coach Chili Davis and double play partner Dustin Pedroia, and came into Spring Training looking to regain some of that 2013 sheen.

With less than a month down in the season, it's too early to conclude anything and will be for a while. That said, Bogaerts has already seen almost 300 pitches this season, so there is relevant information. His problems last year were so strongly linked to his approach at the plate; what weaknesses in his game did opposing pitchers exploit last year, and have they been doing the same this year?

It seems that the standard approach pitchers take when facing rookies is to pound them with fastballs until they can prove they're able to hit or are weak to a different tactic. During that period of his 2014 season, Bogaerts thrived. He had a 137 wRC+ in 224 PAs from April through May, when 65.0% of the pitches Bogaerts saw were hard (fourseam fastballs, two-seam fastballs, cutters, or sinkers), compared to 62.8% leaguewide. He was patient, swinging at 41.3% of pitches and walking in 11.2% of his PAs, and fairly productive.

Scouting reports move quickly, however, and in those first couple months, Bogaerts revealed a tendency to chase offspeed and breaking pitches, particularly those thrown low and away. For the rest of the season, he faced much higher rates of such pitches, and his performance suffered. In what I consider the second part of his season, June through September, his hard pitch percentage fell more than 7 points, to 57.9%, and the rate of pitches thrown low and away rose from 28.2% in April and May to 36.5%. He wasn't able to counter that shift in strategy for the rest of the season: for those 370 PAs, his swing rate on offspeed or breaking pitches increased from 37.9% to 45.5%, his walk rate cratered to 3.7%, his strikeout rate went up to 24.0%, and his wRC+ was a dismal 49. 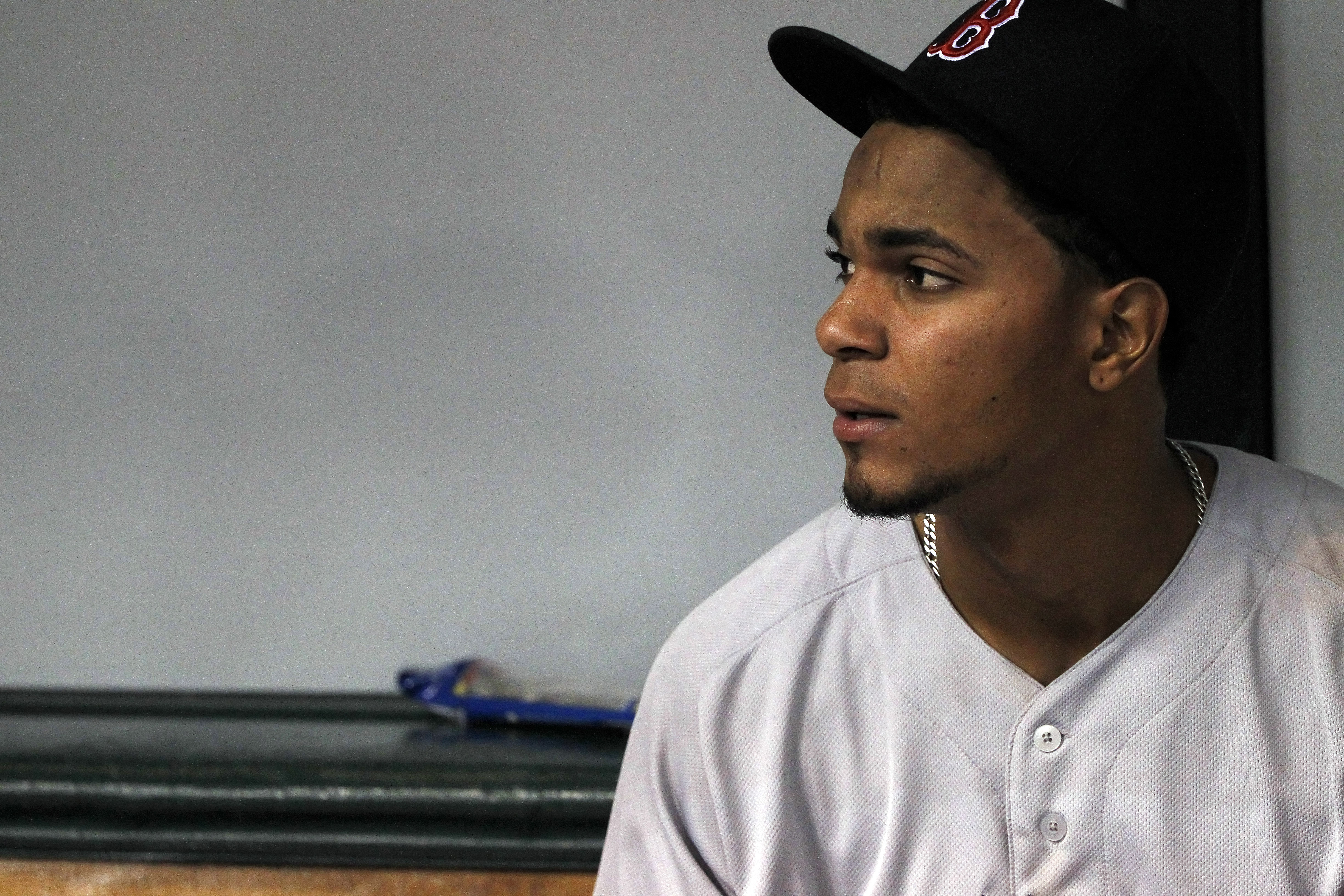 These were disturbing developments, not just for their impact on 2014 but for Bogaerts' future. It wasn't a secret how pitchers were going to attack him by the end of the season, but he was still unable to take advantage of that predictability. Going into 2015, it was not unreasonable to wonder if anything would be different. If you read the title, however, you know that the early returns have been positive, both the results and the underlying process.

Consider this the obligatory small sample size disclaimer -- after playing against the Orioles on Monday night, Bogaerts has 72 plate appearances, not nearly enough for firm conclusions. That said, he's seen almost 300 pitches already, enough for a fairly robust sample when looking for differences in his approach or the approach of opposing pitchers. Pitchers are still focusing low and away against Bogaerts, with 31.9% of pitches to him in 2015 thrown in the bottom-away corner of the strike zone and the out-of-zone areas surrounding it, compared to 24.3% in April and May of 2014 and 27.6% from June onward. Bogaerts is less susceptible to those pitches, however, with his swing rate on those pitches at 28.9%, compared to 36.5% for June-September 2014, and his swing rate on offspeed/breaking pitches is down from 42.1% in that part of 2014 to 33.7% so far in 2015.

As a result, Bogaerts has seen 66.3% hard pitches so far, more than 8 points higher than during the second part of 2014. This shift is also not merely a product of the time of year. Leaguewide, in 2014, pitchers threw hard pitches 63.2% of the time and threw hard 62.8% of the time from April to May. So far, 62.9% of pitches thrown in 2015 have been hard, so it's not as if Bogaerts is benefiting from pitchers not quite settled into their routines in the early part of the season. After so much awareness of his struggles with offspeed and breaking pitches, seeing him regain his patience and use it to force pitchers to throw him a higher rate of hard pitches than league average is extremely encouraging.

With only 72 PAs, there's still a lot of noise in statistics that look at results, but Bogaerts' updated approach is already beginning to show. So far, he's taken a walk in about 10% of his PAs, in line with his early-season results from 2014, and struck out in about 17%, a lower K% than he posted in any month last season. His OBP is a healthy .347, his BABIP is a not-crazy .327, and his wRC+ is 101. It's too early to draw any firm conclusions from these figures, but the fact that none of them stick out as completely horrible or unsustainable suggests optimism due to his potential real approach changes at the plate. There are big error bars at this time of year, but if Bogaerts had a -3 wRC+, like he did in August of 2014, this line of thinking would be much less convincing.

Bogaerts hit his first home run of the season on Saturday, and it came on a first-pitch, 94-mph fastball thrown middle-middle. Watching the video, Caleb Joseph was definitely looking for that pitch to be a little lower and further away than it was, but this pitch didn't miss by much. Last year, getting first pitch strikes on Bogaerts was both easier and less important, since you could always count on him to chase a breaking ball low and away. Already, opposing pitchers are finding that he's chasing less and are being forced back toward the center of the plate as a result with a smaller margin of error.

Again, it's been only 72 PAs, and opposing teams and pitchers are continuously adjusting and will be updating their own approach soon enough. But so far, it looks like Bogaerts has countered the strategy deployed against him to such success last year, and the results are starting to show.

All statistics courtesy of FanGraphs, Brooks Baseball, and Baseball-Reference.

Henry Druschel is a Contributor at Beyond the Box Score. You can follow him on Twitter at @henrydruschel.