Every year, for a variety of reasons, a multitude of players break out and seemingly emerge out of irrelevancy to post stellar individual campaigns. Sometimes, these players turn into your Jose Bautista's or Josh Hamilton's (pre-2013) of the world, players disparaged in years of mediocrity only to turn into perennial All-Stars overnight.

Yet, more often than not, these "break out" players tend to go down the path of Brady Anderson rather than that of Cliff Lee. This isn’t to say that these players fail to ever produce value again at the major league level, but rather that they are unable to replicate their outlier campaigns.

In 2013, we saw quite a few names (some old, some new) burst out and post well above-average seasons. And while some will likely continue to perform at a high level, others are destined to see a decline in their production. So, as the title of this article indicates, here are a few players that could be in store for some regression in 2014 after playing at a rather high level in 2013.

After years of consistent, league-average production, Marlon Byrd had an absolutely horrid 2012, as he hit just .210/.243/.245 with a -1.0 WAR in 48 games before testing positive for a performance enhancing drug, and receiving a 50-game suspension that kept him out for the remainder of the season. On February 1st, 2013, Byrd signed a minor-league deal with the New York Mets, and ultimately made the club out of spring training. He proceeded to have the best season of his career. At age 35, Byrd posted his first 5.0 WAR season of his career, as he hit .291/.335/.511 (138 OPS+) with 24 home runs in 147 games for the Mets and Pittsburgh Pirates. For his efforts, the Philadelphia Phillies signed him to a two-year, $16 million contract, with the potential for him to earn up to $24 million via a 2016 vesting option.

Byrd’s deal with the Phillies was widely panned from the get-go, mostly due to the utter question mark that is the Philadelphia Phillies’ motives. From a purely objective standpoint the deal makes sense, as the contract is essentially expecting him to be worth just 3.0 WAR over the next two years, which he is very capable of. Yet, if the Phillies are thinking they will be getting the 2013 version of Byrd, then, well… that’s Ruben Amaro for you.

Byrd’s stellar 2013 campaign was largely fueled by a rather high .353 batting average on balls in play (BABIP), by far the highest of his career over a full season. He absolutely shouldn’t be expected to do that again, with his 2014 BABIP likely normalizing in the .315 range.

While he certainly benefitted from an inflated BABIP, the biggest oddity surrounding his production spike came in the power department. Not only were his 24 home runs the highest of his career, but it was just the second time he had ever hit more than 12 in a season, and his ISO (.220) was almost a full tenth higher than his career average (.145).

Just by looking at his batted ball metrics, it’s easy to see where this spike came from. For the first time in his career, Byrd posted a home run-per-fly ball ratio higher than 11%, coming in at 16.4%, a mark which is generally associated with true-power hitters. Byrd has a career HR/FB ratio of 9.3%, so it’s easy to reason that the 7.1% jump is a fluke. He also saw drastic bumps in both line drive rate (23.8%) and fly ball rate (37%), both easily career-highs.

Diving further into the numbers, 36.5% of the pitches Byrd saw last year were fastballs, a pitch that he has traditionally hit well (as most hitters tend to do). The jump (from 31.9% in 2011-2012) could explain some of the increase in his ability to drive the ball last year.

You could also always use the old "age card" in expecting a decline in performance.

Oddly enough, Byrd’s strikeout rate was a career-worst 24.9% last year, nearly 7% higher than his career average of 18%. If his strikeout rate keeps climbing (as it has over the past few years), Byrd’s performance will surely decline even if he is miraculously able to continue posting stellar numbers in the power department.

Maybe Byrd has experienced a late-career renaissance in his mid-30′s, but based on his career track-record, all indicators tend to point towards a significant regression in 2014.

Cuddyer’s absolutely atrocious defense (-16 defensive runs saved) led to a merely average 2.5 WAR last year, but his offensive production was by far the best of his career. Coming off a down season at the plate in 2012 (his 101 wRC+ was his lowest tally over a full season since 2005), Cuddyer crushed baseballs in 2013, hitting .331/.389/.530, leading the league in batting average, and posting the 5th highest wOBA (.396) in the National League. Obviously some of that production was due to playing half of his games in the high altitude of Colorado, but wRC+ accounts for that, and he still managed to have the 10th highest mark (140) in the NL, right behind teammate Troy Tulowitzki (143).

Cuddyer has always shown a knack for stellar offensive production, as evidenced by his career 24.6 offensive WAR, and .807 OPS, but his performance had never reached this level before, as in 2013, he was essentially 20% better via wRC+ than at any point in his career before. With his power output, walk rates, and strikeout rates being roughly in line with the rest of his career, the spike in his production comes clearly in his enormous jump in batting average.

For his career, Cuddyer is a .277 hitter, or .054 points less than his 2013 average. Like Byrd, a lot of this comes from an enormous spike in BABIP (shown in the Fangraphs chart below), as his .382 mark was the second best in the NL, and .070 points higher than his career total (.312). Looking at the batted ball data, there is no clear jumps in either his line drive percentage or fly ball percentage, indicating that his BABIP was most likely fueled almost entirely by luck. 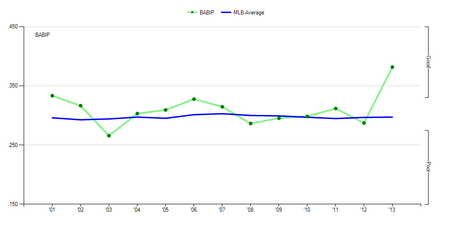 Another factor that will likely lead to Cuddyer’s regression in 2014 would be his age. Almost 35, it’s highly unlikely that Cuddyer is peaking in his mid-30′s, and the odds of him maintaining his performance into next season seem negligible.

Ok, this one is easy. The man who nearly beat out Cuddyer for the NL batting crown (and who was leading for much of the season), was also the only player in the NL to post a higher BABIP than him, as Johnson’s .394 BABIP was easily the highest in baseball.

In his third season as a regular, and first with the Braves, Johnson broke out to hit .321/.358/.457 with a 127 wRC+ and 2.8 WAR. He set career bests in nearly every statistical category, and proved that he was more than just a throw-in in last winter’s Justin Upton deal.

Judging from his batted ball rates, Johnson did see one major jump in a category outside of BABIP, as his 27% line drive rate was significantly higher than his average leading up to 2013. This helps to partially explain the BABIP jump as line drives traditionally have a much higher chance of falling in for hits compared to ground balls or fly balls. In 2013, Johnson hit .820 on line drives, collecting 73 hits in just 89 at-bats. Those 73 hits accounted for 44% of all of Johnson’s hits in 2013. So, yeah, he probably won’t be challenging for the batting title again in 2014. 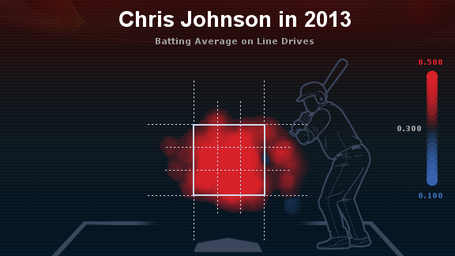 Many pundits were extremely pessimistic when the Boston Red Sox decided to give veteran outfielder Shane Victorino a three-year, $39 million deal prior to last season, largely due to his extreme platoon splits, ballooning age, and mediocre 2012 season. Victorino’s splits still favored him batting against left-handers in 2013, however he proved his doubters wrong, as he went out and posted what arguably could have been the best season of his career. In 122 games for the World Series winning Red Sox, Victorino hit .294/.351/.451 with a 119 wRC+ and career-best 5.6 WAR. While Victorino’s bounce-back season was certainly encouraging, there are multiple factors that lead me to believe a decline is in store for Victorino this year.

Just getting the usual regression-indicator out of the way, Victorino did experience a jump in BABIP last year, posting a .321 mark, .022 points higher than his career average, and .045 points higher than the .278 BABIP he posted in his down 2012 campaign. The spike in BABIP is certainly supported by his line drive rate, which jumped from 17.8% to a career-high 22.4% last year. He also posted the best home run-per-fly ball ratio of his career, registering a homer on 10.8% of his fly balls, which helps explain how he topped 14 home runs for just the third time in his career. All of the above can also be explained by the fact that 51.3% of the pitches he saw in 2013 were strikes, the most he has seen in three years. With more strikes being thrown to him, the more optimal pitches he sees.

Victorino’s production can also be evidenced by a career-low 4.7% strikeout rate. Not one to ever strikeout at a high rate, 4.7% is an absurdly low number even for Victorino. He also set a career-high in his walk rate, reaching first base via a walk in just over 14% of his plate appearances. Both of those numbers should return to normal this year. 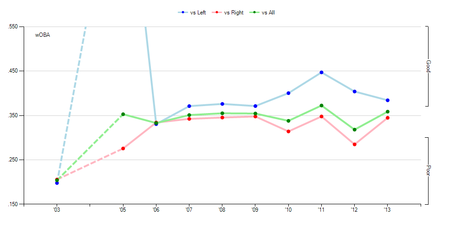 Of course, above all, one number seems to do the best at explaining the jump in Victorino’s overall performance: 23. In 2013, Victorino saved the Red Sox approximately 23 runs with his glove. He had never saved more than 14 runs with his glove in his career before, and that was all the way back in 2007. In fact, Victorino’s 30.4 UZR/150 in 2013 was almost 21 points more than his career average of 9.5. His UZR of 24 nearly doubled his previous best total.

Putting Victorino’s glove last year in a league-wide perspective, his 24 defensive runs saved (DRS) was the third highest total among outfielders, and the 6th highest among all major league position players. His UZR/150 was the best in baseball. Yep, solely using UZR/150, Shance Victorino was better with the glove in 2013 than Andrelton Simmons, Manny Machado, Evan Longoria, and Carlos Gomez, all defensive wizards in their own right.

At 33, we can’t expect Victorino to repeat his 2013 production, especially on the defensive, side, where even a dip back to his career norms would make him more of a 3-win player than the 5.6 WAR he had last year. Victorino is still plagued by his monstrous platoon splits, and both his age and the numbers seem to indicate his performance will decline in 2014 on both sides of the ball.