The Royals and Orioles, neither of whom have won a pennant since the 1980s, are both poised to finally break through. They've both gotten to this point on a similar strength: relief pitching.

Share All sharing options for: 2014 ALCS: battle of bullpens

Both American League Division series this year ended in sweeps, with the Orioles taking out the Tigers and the Royals upsetting the Angels. Both victors relied heavily on their bullpens, with Baltimore's strength being all the more apparent when juxtaposed with the brutal meltdowns of Detroit's relievers. Below, I'll break down just how good both teams' relief corps have been.

The Orioles relievers are a group that's solid from front to back, led by breakout closer Zach Britton. A starter his whole career, he transitioned to the bullpen in 2014 and thrived, with a miniscule 1.65 ERA in 76.1 innings. While his peripherals are measurably worse (3.13 FIP, 2.82 xFIP), his batted ball profile, mainly an astronomical 75.3 GB%, has his SIERA at 2.14. That GB% is tops in the majors by a whopping 7.8% among pitchers with at least 50 innings, well ahead of 2nd-place Brandon League.

Ahead of Britton, the O's trot out eighth-inning man Darren O'Day, he of the 1.70 ERA and impressive 90.8 LOB%. That mark, good for fourth in the majors, has helped him post a third consecutive season of at least 0.7 fWAR, and his fifth in the last six years. While 0.7 may not sound like much, keep in mind that relievers get far fewer innings than starters, and O'Day's consistency is a valuable asset. In his 68 appearances this year, O'Day has allowed more than one earned run only once, on September 2nd, and has 58 scoreless appearances.

Trade-deadline acquisition Andrew Miller, obtained from the Red Sox on July 31st in exchange for prospect Eduardo Rodriguez, has been excellent. His 2014 in Boston was pretty good, a 1.69 FIP in 42.1 innings, but his stint in Baltimore has been even better, with a 1.13 FIP and only 3 runs allowed in 20 innings. While Rodriguez's ceiling is uncertain, the Miller trade has already benefited the Orioles in the short run by making a stacked bullpen even more filthy.

Beyond the top three, there are four Oriole relievers who have gotten at least 50 innings this year: Tommy Hunter, T.J. McFarland, Brian Matusz, and Brad Brach. Matusz's FIP is the worst of the bunch at 4.00, and each of them posted a lower ERA than FIP. What with a staff of uninspiring starters, led by Wei-Yin Chen and Chris Tillman, the extra depth has helped and will help the Orioles to go deep into the postseason.

The following is a list of the top relievers in the majors, as determined by RE24. (For an explanation of why RE24 is a good metric for relievers, click here.)

While I'm including Miller's Red Sox time as well, it's pretty noteworthy that the two teams in the ALCS have five of the top seven RE24 relievers. That said, let's look at numbers 2 and 3, who make up part of a stellar Kansas City relief corps. 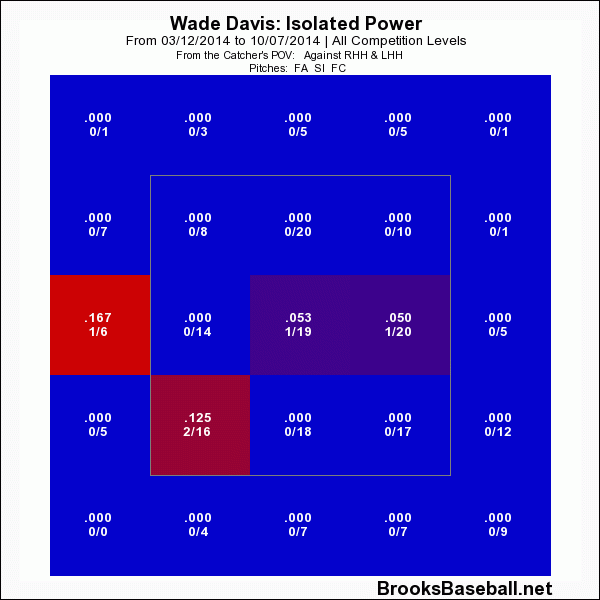 That's Davis's zone profile (isolated power) on hard pitches. The darkest spots are miniscule sample sizes, and there's only one section inside the strike zone that's above .053. Simply put, Davis does not allow extra-base hits. Pretty much ever. He hasn't allowed a homer all year, and this dominance is even better shown in a spray chart:

Propelled in large part by their use of speed and sacrifice bunts, the Royals lead the Angels in the ALDS. Just how much of what they've accomplished can be chalked up to good luck?

When should you pull the starter?

A great deal has been made about Ned Yost's decision to pull James Shields in the Wild Card Game and especially Matt Williams' decision to yank Jordan Zimmermann in Game 2 of the NLCS. What do we need to know about the all-important hook?

Kansas City Royals: Resourceful or reckless? When should you pull the starter?

Absurd. Two of the doubles were pretty much on the foul line, meaning Davis was a couple inches away from going an entire year and only allowing three extra-base hits.

His bullpen mates haven't been quite as good, but they've still been dominant, especially Kelvin Herrera and closer Greg Holland. Herrera, like Davis, hasn't allowed a homer in 2014, and he continues the trend of relievers outperforming their peripherals with a 1.41 ERA and 2.69 FIP. Holland has been even better, with a 1.44 ERA, 1.83 FIP, and 48 FIP-, and – dare I say it? – 46 saves.

KC also has a few relievers with comparably few innings, but have still posted excellent work during their limited chances. Chief among that crowd is Brandon Finnegan, the recent draftee who was excellent in the wild-card game. Jason Frasor was decent with the Rangers, but has been on fire since joining the Royals in mid-July, stranding 90.4% of baserunners in his 17.2 innings.

Both teams still vying for the American League pennant have gotten there on the strength of their bullpens, and look for the late-inning dominance to continue as the ALCS begins. Fatigue is certainly an issue, but with relievers as deep as these, it's noticeably less of one.

Steven Silverman is a featured writer at Beyond the Box Score and a student at Carnegie Mellon University. He also writes for Batting Leadoff. You can follow him on Twitter at @Silver_Stats or email him at Steven@SilverStats.com.