The Armando Benitez All-Stars: Constructing a team from the bottom of the Hall of Fame ballot

Armando Benitez, Kenny Rogers, and Jacque Jones each earned exactly one vote on this year's Hall of Fame ballot. If we constructed a team of such players, how good would that team be?

Share All sharing options for: The Armando Benitez All-Stars: Constructing a team from the bottom of the Hall of Fame ballot

The BBWAA announced the results of their annual Hall of Fame vote yesterday, leading the Internet to celebrate those elected, gnash their teeth over those who fell just short, and point and laugh at the bottom-feeders who somehow garnered a few votes. I mean, come on: J.T. Snow? Kenny Rogers? Armando Benitez? Jacque Jones?!

As usual, Twitter was on the scene, ready with that responses ran the gamut from righteous indignation to sarcasm and humor. But just because they don't deserve Hall of Fame consideration doesn't necessarily mean they're terrible at baseball.

In fact, let's give them a little love. Let's construct a team of just those players who received one vote for the Hall of Fame and see how they measure up.

Over the past ten elections, 20 players have received exactly one vote. They're listed in the (hopefully sortable) table below:

It's a wide mix of talents. There are some respectable careers, some sudden drop-offs, and more than a few journeymen. If you gathered them together in some mid-90s fantasy baseball league, no one would be incredibly jealous. Here's one plausible lineup, presented in the style of Dan Szymborski's ZiPS projections on FanGraphs, with Baseball-Reference.com wins above replacement (bWAR) totals from the 1996 season:

Center field is admittedly thin, but the remaining positions are solid. And even if we populate the bench and remaining relievers with replacement-level players, that team is worth 54 bWAR. How well does this number translate to actual wins? To estimate that, let's plot wins as a function of bWAR and fit a trendline. I used data from 1996-1998, around the sweet spot of these players' careers but avoiding the strike-shortened 1994 and 1995 seasons. 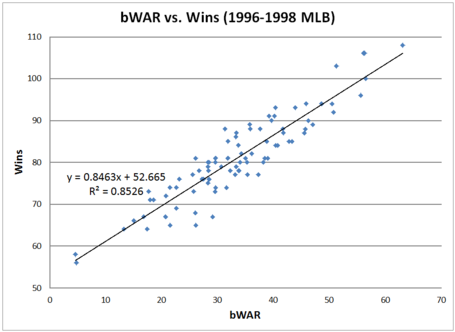 This matches well with previous work: Baseball-Reference.com sets a replacement level team to 52 wins per year (compare to our y-intercept of 52.7), and FanGraphs found a correlation between fWAR and wins of R2 = .83. That means that our team of one-vote all stars would be expected to go 98-64! For reference, the four teams in that year's LCS won an average of 94 games. 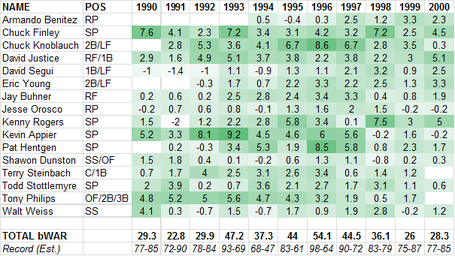 This isn't even a terribly expensive roster. As an example, let's look at the salary costs for 1996. The most expensive contract belonged to David Justice, as he earned $6.2 million. The 16 Hall of Fame candidates earned a total of just under $49 million that season. Add nine players at the major league minimum of $122,667, and our squad comes in at $50.1 million. That would have been only the 12th-highest payroll in baseball, behind the Rangers ($51.2 million) and ahead of the Rockies ($46.9 million), and well behind the league-leading Braves ($74.5 million). Reasonable.

This is more of a fun exercise than serious analysis: I'm not saying there's a market inefficiency in signing the guys destined for the bottom of the Hall of Fame ballot. But my point is that it takes a ludicrous amount of talent -- and a fair bit of actualization of that talent -- to play professional baseball at the highest level for over a decade. Are Armando Benitez and Jacque Jones worthy of Hall of Fame enshrinement? No. Are they even worthy of votes? Probably not, but those careers are nothing to sneeze at.

Bryan Cole is a contributor at Beyond the Box Score. You can follow him on Twitter at @Doctor_Bryan.