A Graphic Look at the All Star Vote: How WAR Would Change Balloting

Share All sharing options for: A Graphic Look at the All Star Vote: How WAR Would Change Balloting 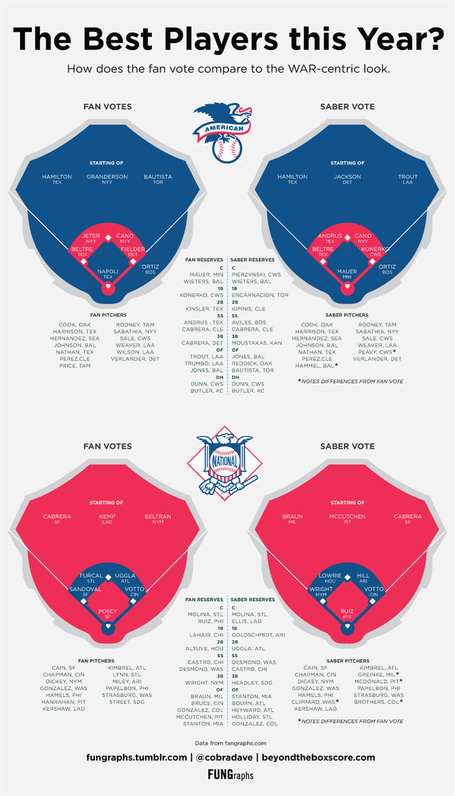 Sort of a follow-up to Lewie's post last week on stats correlating to All-Star voting, we continue on with our coverage here with my picks for the AL and NL All-Star teams. While I was gathering my personal ballot together, looking at the the official fan votes, I noticed it didn't really deviate as much as I thought it would. We have our usual Yankees and Rangers on there, but there are some like Albert Pujols. I imagine if he was a Cardinal still and put up that sort of April, he might be in here somewhere. I noticed there's fewer pitcher variations, but here's what I noticed in terms of players who deserved the nod and would have been extremely grateful for it.

Keith Law also thinks highly of Austin Jackson and echos the sentiment that he was snubbed (INSIDER). In my AL shortlist, I believe there's others that should have gotten the nod:

-Speaking of Austin Jackson, who is 4th in the WAR leaderboard with a 3.6 WAR, what about Mike Trout? Lewie informed me that he wasn't on the official ballot, but leading the AL in WAR with 4.3 puts him in some other discussion other than AL Rookie of the Year. Glad he's on the reserve list at least.

-If there was more than one reserve 2B, I would like to see Jason Kipnis, who is playing very close to Ian Kinsler's numbers (See Leaderboard):

-Similarly, if there were one more reserve 3B, I'd like to see Mike Moustakas (2.8 WAR) or Brett Lawrie (2.8 WAR) in there. (See Leaderboard)

-Jake Peavy (2.8 WAR) has cooled off a little bit, but has similar stats to C.C. Sabathia. I would have voted him in instead of C.J. Wilson (2.0 WAR) (See Leaderboard)

-The fact that Prince Fielder is no longer in the NL easily opened up another reserve spot in the NL lineup, easily occupied by any warm body, even a hurt Ryan Howard could have made it. So Bryan LaHair (2.1 WAR) is on here after having an amazing April. But what about Paul Goldschmidt (2.4 WAR)? He's been better from May through end of June. (See Leaderboard, LaHair is missing in this sort)

-Leader in wRC+ for SS in the NL.. Jed Lowrie (2.4 WAR) deserves a reserve spot, but I'd give him the starting nod over Ian Desmond.

-Don't get me started with 3B. Where were the Mets voters here? David Wright clearly should have been the starter (4.7 WAR). I would nominated Chase Headley (3.4 WAR) over the starter Pablo Sandoval (1.0 WAR, I know, he was injured). (See Leaderboard)

-How did Zach Grienke, with a 3.5 WAR, only behind Justin Verlander in MLB WAR Leaderboard, and behind Stephen Strasburg in FIP with 2.36 FIP (See Leaderboard).