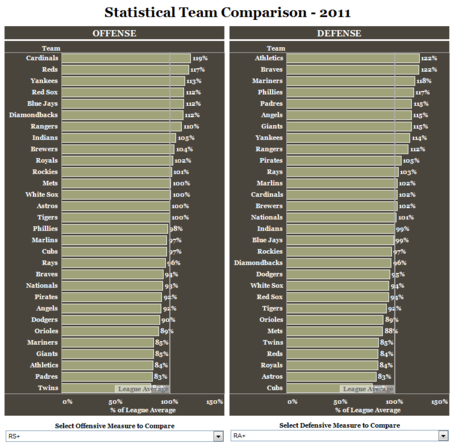 Before every new series the Mets play I create a saber-stat series preview over at Amazin' Avenue comparing the Metropolitans against their next opponent. I take seven statistics for both offense and defense, calculate the league average (NL and AL) and scale that to 100%, and then calculate the percent of league average both teams have achieved for each statistic.

I thought it might be interesting to use the same methodology to create an interactive visualization where you could select one offensive and one defensive statistic at a time and see how each team in the league compares.

The graphic above is a screen shot of the tool. I've embedded a version of the tool below the fold. The data in the tool is through Sunday night and going forward I will be refreshing the data on a weekly basis.

Feel free to play around as much as you like with the tool. Note that you can sort each of the two columns. After you select a statistic from the drop down simply hover the mouse over the ascending bar chart icon below and select either ascending or descending. The two bar charts sort independently.

As I mentioned, I will update the data league-wide every week, so be sure to bookmark the tool and check back to see how teams compare. Be sure to select "wide" from the right hand side of the page to view it in all its glory.