Gordon has had a season to forget in 2016. Luckily, his problems seem fixable.

Share All sharing options for: Alex Gordon’s late swing is the reason why he can’t hit

Ever since his breakout as an outfielder in 2011, Alex Gordon has been one of the most underrated players in baseball. A three-time All-Star and four-time Gold Glove winner, Gordon ranks 14th among all MLB players in fWAR since 2011, just ahead of bigger names like Jason Heyward and Paul Goldschmidt. This lack of recognition is partly due to Gordon’s style: he doesn’t hit a lot of home runs, and much of his value is derived from his excellent defense; playing in small-market Kansas City doesn't help matters either.

Due to his relative obscurity, it comes as no surprise that Gordon’s swift demise has gone all but unnoticed by the rest of baseball. The 32-year-old left fielder signed a four-year, $72 million contract extension with the Royals this past offseason, and he has 'rewarded' them by hitting .199/.303/.327 with eight home runs in 80 games so far. Gordon’s defense has declined a bit as well, resulting in a net worth of -0.2 fWAR on the year, though it is a limited sample.

While it’s reasonable to expect some age-related decline as Gordon gets deeper into his 30s, his rapid decline from 2015 to 2016 is striking. Gordon posted a 122 wRC+ in 422 plate appearances last year, and has a 72 wRC+ through 314 plate appearances this season. He suffered a wrist injury in late May, but had a .650 OPS in the 42 games leading up to his in-game collision with teammate Mike Moustakas. Since returning in June, Gordon has been slightly worse offensively, but not enough to point at the wrist as a specific cause for his decline.

So we’re forced to look deeper, and Gordon’s strikeout rate sticks out like a sore thumb. He is striking out 29 percent of the time this season, well above his career rate of 21.3 percent. His .264 BABIP and .129 ISO are also down compared to career norms.

Oddly, Gordon’s batted ball profile is nearly identical to what he produced in 2015. He has a 24.2 percent line drive rate and is making hard contact 36.3 percent of the time, according to FanGraphs. However, his fly ball rate is much higher than usual, and his average exit velocity has declined against both righties and lefties. An increase in his average launch angle seems to be the culprit here; after a tight spread centered around the 10-15 degree mark in 2015, Gordon has a wider spread approaching 20 degrees (and higher) in 2016. 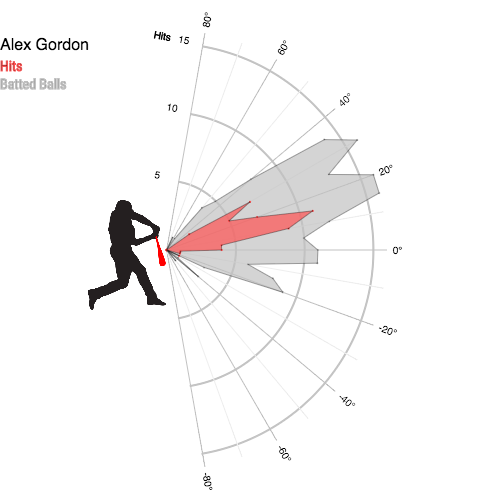 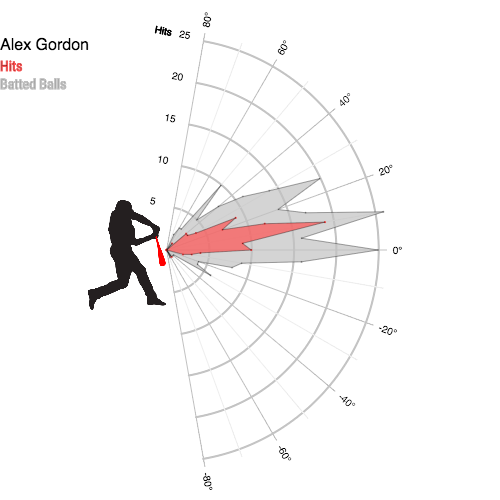 Gordon’s spray chart also provides a clue as to why he is struggling. In 2014 and 2015, Gordon pulled the ball over 45 percent of the time. That figure is down to just 41.2 percent in 2016. While this is similar to what he has done throughout most of his career — he only has a career 41.9 percent pull rate — the batted ball distribution shows that most of those balls being pulled are on the ground. Anything up in the air is going to center or left field. 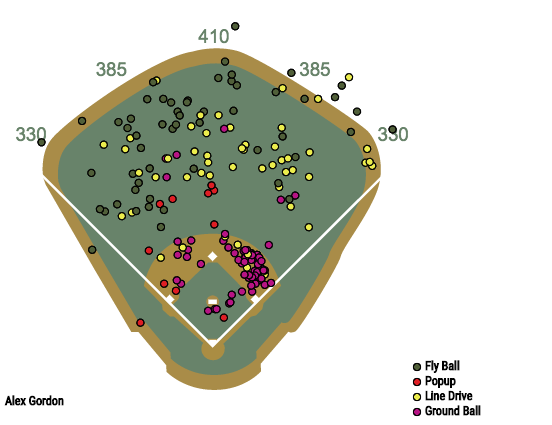 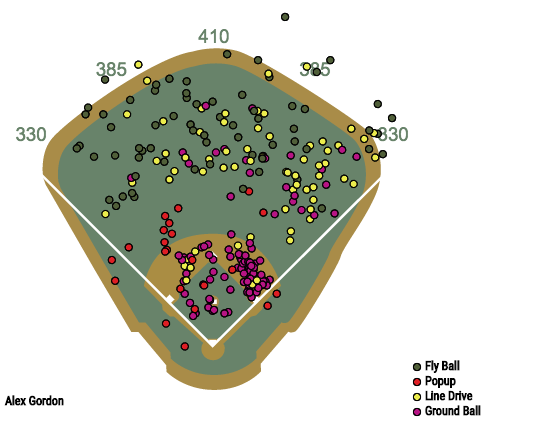 So we go to the tape, and as fate would have it, there are some visible changes in his swing. For one, his stance is slightly more upright in 2016, with the bat held a bit more vertical compared to last season. I’m no scout, but the 2015 stance (vs. Gibson, night game) surely looks more aggressive than its 2016 counterpart. 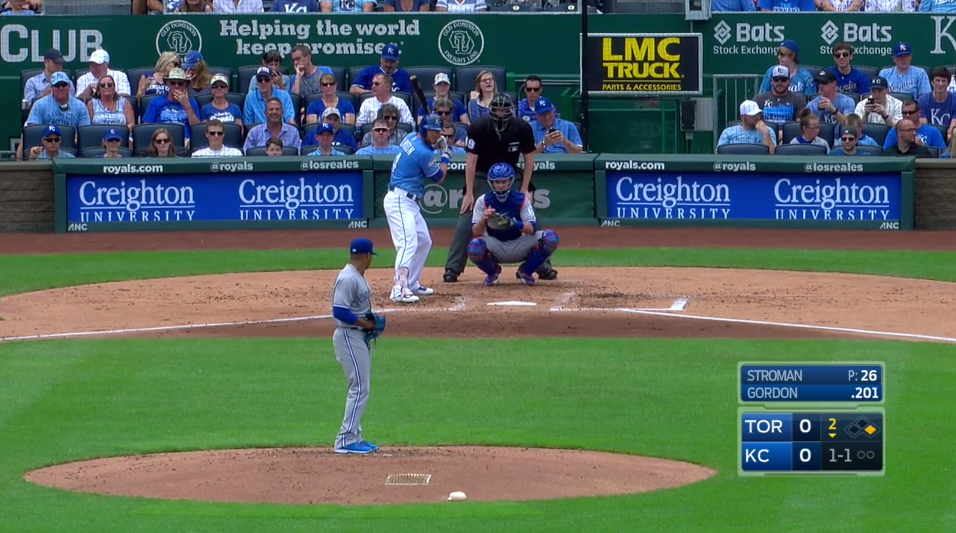 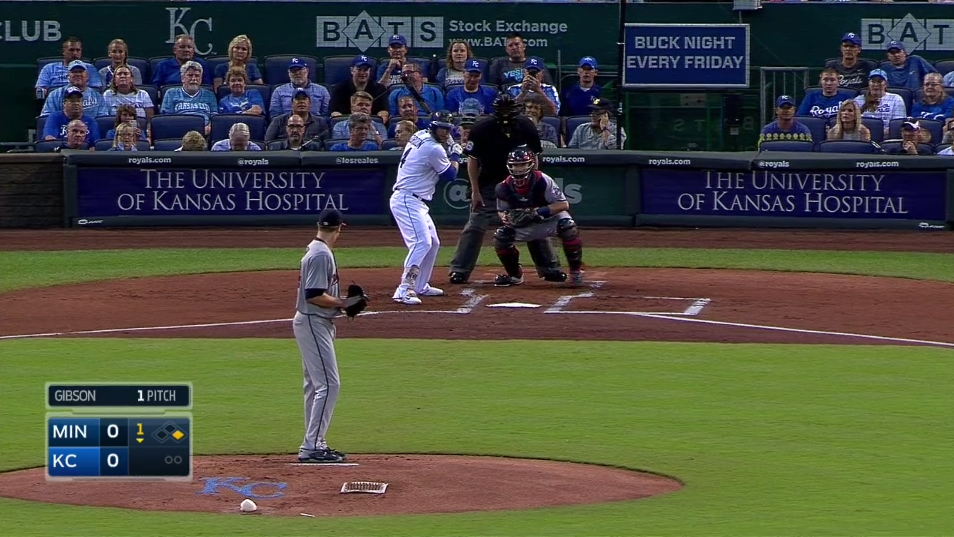 Gordon hasn’t changed his swing as far as I can tell, but I did notice that Gordon’s leg kick is coming a bit later this season. In 2015, Gordon would typically start his leg kick as the pitcher was finishing his wind-up; this particular image shows Gordon facing Minnesota’s Kyle Gibson, but several other randomly selected home starts (for consistency of camera angle) were the same. In all of them, Gordon had his front leg set right around the time the pitcher released the baseball.

There is not much extraneous hand movement either. Gordon’s hand placement as he starts his swing is similar to where they are in the above image, allowing him to be quicker to the baseball. On this particular swing, Gordon hit a sharp ground ball into right field for a single.

In 2016, Gordon’s leg kick is coming much later. Here, in a start against Toronto’s Marcus Stroman last Sunday, Gordon still has his leg in the air well after Stroman has released the baseball.

Gordon’s hands also move a bit too. With his less aggressive stance (for lack of a better word) in 2016, Gordon has to load his swing a bit more than in previous years, which results in him bringing his hands back slightly before starting his swing. It’s slight, but that fraction of a second longer seems to be enough to throw him off; on this swing, Gordon rolled over weakly to the pitcher.

The results speak for themselves. Gordon is swinging and missing more on all types of pitches (not just fastballs), but his late leg kick is giving him less time to react to the pitch thrown. His pitch recognition hasn’t suffered, but his lower contact rate (and lower quality of contact) have resulted in a 2016 season that Gordon and the Royals would like to forget.

Rob Rogacki is a contributor at Beyond the Box Score and the Managing Editor of Bless You Boys, SB Nation's Detroit Tigers community. You can follow him on Twitter at @BYBRob.